NASA Moon rock to go on public display at ASU

A lunar sample from a rock that once sat on the surface of the Moon will be on public display at Arizona State University beginning Nov. 5.

The golf ball-sized Moon rock, on a long-term loan to ASU from NASA, will be on display in the Lunar Reconnaissance Orbiter Camera (LROC) Visitor Gallery, located in the Interdisciplinary A building on ASU’s Tempe campus. 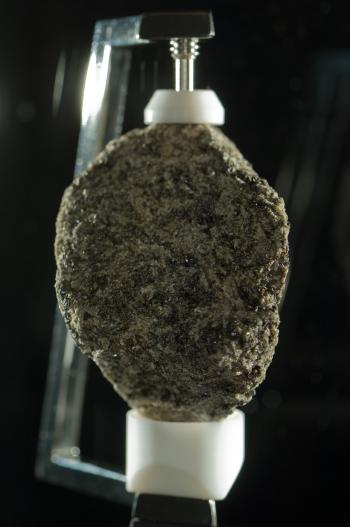 Weighing 77 grams, or about 2.7 ounces, the lunar sample comes from a larger Moon rock that was collected by Apollo 15 astronauts. The parent sample, from which the ASU rock was cut, weighed 9.6 kilograms, or about 21 pounds, and was the largest of the rocks collected during the Apollo 15 geologic traverses.

Informally named after its collector, Apollo 15 astronaut Dave Scott, the “Great Scott” rock was picked up about 13 yards (12 meters) north of the rim of Hadley Rille on August 2, 1971. It is part of the 842 pounds (382 kilograms) of lunar samples collected during six Apollo missions (1969 to 1972), and one of the most intensively studied samples.

Brownish-gray in color, sample 15555 is classified as medium-grained olivine basalt. Basalt is one of the most common types of rocks found on Earth, and is also one of the main lunar rock types. This rock crystallized from magma erupted from the mantle almost 3.3 billion years ago, and is predominantly composed of silicate minerals.

“Documented samples from the Moon, or any asteroids and planets, are the key to unlocking how planets form and evolve," said Mark Robinson, professor in the School of Earth and Space Exploration in ASU’s College of Liberal Arts and Sciences. "The Moon is especially interesting because it preserves a record of the early solar system that you simply can’t find on Earth, since plate tectonics and fluvial erosion have mostly erased Earth’s early geologic history. Most lunar rocks are older than the oldest Earth rocks found to date. Thus the Moon can help scientists go back into the early stages of planet formation.

“However, it is fascinating to remember that it appears that some of the areas Apollo astronauts did not sample are relatively young, perhaps as young as 500 million years. What will we learn from these younger lunar rocks? A fascinating question left to the next generation of lunar explorers.”

The ASU Moon rock is encased in a triangular NASA-prepared airtight glass case that is filled with inert gas to protect the sample from the terrestrial environment. It resides in a protective alcove encapsulated in a specially designed display secured by multiple levels of security.

The display's creator, Chris Skiba, a research professional in the School of Earth and Space Exploration, was asked to design a display worthy of showcasing a priceless national treasure. Skiba stated that he had seen many lunar sample displays and wanted to “kick it up a notch” so the public could experience the sample in 360 degrees.

The Moon rocks sits on top of a quartz plate, attached to a polished stainless steel stage that rotates displaying all sides of the Moon rock. According to Skiba, this might be the only Apollo 15 lunar sample for public viewing that rotates.

“It is almost like you are holding it yourself and experiencing all sides of the Moon rock,” Skiba said.

Skiba utilized the effects of the quartz and how it can transmit light. The quartz plate is illuminated by a blue LED that creates a stunning blue ring of light around the sample.

A fitting home
Several Apollo lunar samples are on long-term loan for public displays around the world. Display samples are historically allocated to major museums with relevant content, or places with a current or historical connection to lunar exploration. ASU has direct connections to both historic and current lunar missions.

The Moon rock will be unveiled at the School of Earth and Space Exploration’s annual Earth and Space Exploration Day on Saturday, Nov. 5. To celebrate the rock’s arrival, a special presentation will be held in Physical Sciences F-wing room 166 at 11 a.m. It will be followed by a light reception in the courtyard beside the Interdisciplinary A building that is home to the LROC Science Operations Center (SOC).

Visitors can view the Moon rock in the LROC Visitor Gallery, which also features “The Lunar History Walk” hallway exhibit and additional interpretive exhibits in the Science Operations Center (SOC). The SOC handles the planning, targeting and data processing activities associated with the LRO camera, and is designed so that guests can observe the scientists at work behind a glass wall.

The gallery is open to the general public from 9:30 a.m. to 4:30 p.m., Monday through Friday (excluding holidays).

Yeo, who has played with the Boston Symphony since 1985 and who is on the faculty of the New England Conservatory of Music, will begin teaching at ASU during the 2012 Fall semester. 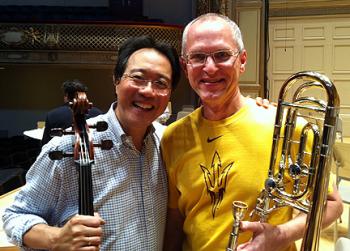 Douglas Yeo, here with Yo Yo Ma, will begin teaching at ASU Fall 2012. Photo by Toby Oft Download Full Image

“The School of Music is honored to have a musician of Yeo’s versatility and experience on our faculty,’’ Marshall said.

“His background with one of the finest American orchestras and his research into many types of brass instruments, including early instruments such as the serpent, make him a marvelous resource for our students,’’ she said.

Yeo’s prestigious career includes not only playing for 26 years with the Boston Symphony, but also serving as bass trombonist of the Baltimore Symphony Orchestra, a high school band director in Edison, N.J., and a freelance musician in New York City where he played for numerous Broadway shows, symphony orchestras and a four-year tenure with the Goldman Band.

He began playing the trombone in grade school and by the time he was in high school he wrote in his yearbook that he wanted to play in the Boston Symphony.

His career has not only included nearly three decades with the BSO but also mastery of playing ancient instruments such as the serpent and ophicleide, teaching residencies around the world, authorship of numerous articles about the trombone, historical brasses and music and co-authorship of "Mastering the Trombone" with Edward Kleinhammer.

Yeo has been a frequent soloist with the Boston Pops Orchestra and was the first bass trombonist to perform John Williams’ Tuba Concerto on bass trombone with Williams conducting.

In 1996, Yeo launched the first website devoted to trombone, yeodoug.com, that has more than 10,000 daily visitors and is considered by many as the premiere spot for comprehensive, up to date information about the trombone.

“He is three professors in one,’’ said Sam Pilafian, ASU School of Music professor and founder of the Empire Brass Quintet. “It would be enough that he is one of the world’s leading performers and pedagogues on this instrument, but Doug is also one of the world’s authorities on the history of our low brass instruments, and he can perform on these historical instruments so well that they come back to life as vivid musical sounds from long ago,’’ Pilafian said.

Yeo expects to be in the Valley in February auditioning prospective students. “My decades in the Boston Symphony Orchestra will continue to inform my teaching as I work to encourage and challenge the next generation of young musicians, some of whom may already have written in their high school yearbooks that one of their goals in life is to play in the Boston Symphony Orchestra,’’ Yeo said.