A new analysis of complex interactions between humans and the environment preceding the 9th century collapse and abandonment of the Central Maya Lowlands in the Yucatán Peninsula points to a series of events – some natural, like climate change; some human-made, including large-scale landscape alterations and shifts in trade routes – that have lessons for contemporary decision-makers and sustainability scientists.

In their revised model of the collapse of the ancient Maya, social scientists B.L. “Billie” Turner and Jeremy “Jerry” A. Sabloff provide an up-to-date, human-environment systems theory in which they put together the degree of environmental and economic stress in the area that served as a trigger or tipping point for the Central Maya Lowlands. 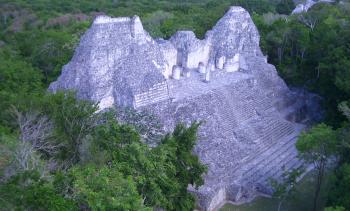 The co-authors described the Classic Period of the Lowland Maya (CE 300-800) as a “highly complex civilization organized into networks of city-states,” in their perspective article published Aug. 21 in the online Early Edition of the Proceedings of the National Academy of Sciences.

The ancient Maya in this hilly and riverless region confronted long-term climatic aridification, and experienced decadal to century-level or longer droughts, amplified by the landscape changes that they made including large-scale deforestation indicated in the paleoecological record.

Previous to the collapse, the Maya occupied the area for more than 2,000 years, noted the authors, “a time in which they developed a sophisticated understanding of their environment, built and sustained intensive production [and water] systems, and withstood at least two long-term episodes of aridity.”

They document the human-environment interactions that were severely stressed during the 9th century arid phase.

“This environmental stress was complemented by a shift in commercial trade from across the peninsula to around it, which reduced the economy of the ruling elite to keep up the livelihood infrastructure to prevent the tipping point,” said Turner, a Distinguished Sustainability Scientist with the Global Institute of Sustainability at Arizona State University.

“It acknowledges the role of climate change and anthropogenic environmental change, while also recognizing the role of commerce and choice,” he said.

Co-author Sabloff noted that rather than a monolithic period of collapse, there were many variable patterns, which is consistent with the thesis Turner and he advance.

“The only way to explain the variability is to take a complex systems view,” said Sabloff, president of the Santa Fe Institute.

“The Maya case lends insights for the use of paleo- and historical analogs to inform contemporary global environment change and sustainability,” wrote the authors. “Balance between the extremes of generalization and context is required.

“Climate change, specifically aridity, was an important exogenous forcing on human-environment conditions throughout the Maya Lowlands,” they concluded. “Complex system interactions generated the collapse and depopulation of the (Central Maya Lowlands) and fostered its long-term abandonment. This lesson – increasingly voiced in the literature – should be heeded in the use of analogs for sustainability science.”

Archeologist Jeremy “Jerry” A. Sabloff heads up the Santa Fe Institute, a nonprofit research center that seeks improved scientific understanding of complex adaptive systems in nature and human society. He is a member of the National Academy of Sciences and the American Philosophical Society.

While Ashleigh Gonzales is a typical, 20-year old ASU senior, she is not your average student.

While Ashleigh Gonzales is a typical, 20-year old ASU senior, she is not your average student. Unlike other undergraduates studying life sciences, her decision to major in molecular biosciences and biotechnology created an unusual challenge – one few others are willing to tackle.

Gonzales is blind. Yet she is pursuing a STEM (science, technology, engineering and math) degree that requires an understanding of many detailed, microscopic biological elements – something she finds fascinating and exciting. 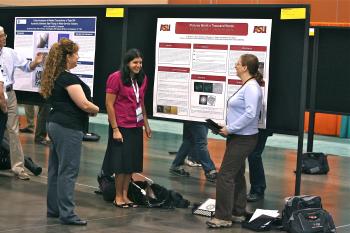 “When I applied to Arizona State University, I chose molecular biosciences and biotechnology because of my love of biology,” said Gonzales. “I was always very interested in science. From a high school biotechnology course, I found that although I loved biology, it was the finer details, such as the molecular processes involved, that I was most interested in.”

Last spring, she signed up for the 400-level course Cell Biotechnology, which teaches students how to experiment with various types of cell cultures and requires a large amount of work with microscopes.

As part of the course, students must design and execute a research project as well as give a final presentation to classmates and bioimaging faculty. Gonzales’ project described how 2-D images could be converted into 3-D tactile boards. They, in turn, provide students who are blind or visually impaired an opportunity to independently learn about images found in textbooks, presentations and captured through a microscope.

At age 13, Gonzales lost her vision completely due to a rare genetic disorder. She had to learn Braille and other skills very quickly. As a college student, she must rely on current technologies such as line drawings, Braille, and image descriptions from teachers and classmates. These methods offer limited tactile translation. Through her project, she hopes to improve access to STEM courses for students who are blind or visually impaired.

“I chose this project because I feel very strongly about the potential for the blind population to have access to STEM materials,” Gonzales said. “Right now, very few blind people will pursue a career in a STEM field. There is a whole group of people whose only barrier to STEM fields might be easier to break than previously believed.”

“Ashleigh was the lead author on this poster and presented her research to a group of outstanding microscopists from around the world,” said Debra Baluch, research scientist in School of Life Sciences. “We were excited to see the positive response from fellow microscopists as our student who is blind, explained to them how to look at image data in a different way.”

“Our poster presentation was very successful,” said Gonzales. “Several people showed an enthusiastic interest in our project. People inquired as to how the tactile boards are made, and provided suggestions on how they might be used. Our research stimulated a lot of conversation about the potential for blind people to have better access to STEM fields.”

This fall, the two students are scheduled to present posters at conferences for the Society for Neuroscience and American Society for Cell Biology.

In addition, Gonzales will continue her leadership role for a second year as president of Ability Counts Tempe – a disability awareness group on ASU’s Tempe campus. In an attempt to remove common stigmas, the group works to promote better understanding of people with disabilities.