Arizona State University has announced U.S. Secretary of Education Arne Duncan will address nearly 9,000 undergraduate students* at the spring 2014 undergraduate ceremony, May 14 on the Tempe campus.

More than 12,000 total ASU undergraduate and graduate students will have degrees conferred, with the graduate commencement ceremony scheduled for 10:30 a.m., May 12, in Wells Fargo Arena. 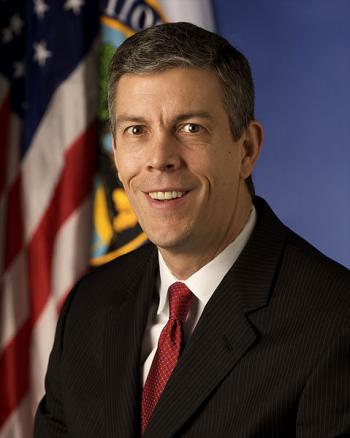 The undergraduate commencement ceremony will be at 7:30 p.m., May 14, on Frank Kush Field, in Sun Devil Stadium.

America’s top educator, Duncan was named to his cabinet position by President Barack Obama, and confirmed by the U.S. Senate in January 2009. Prior to his appointment, Duncan served as the CEO of Chicago Public Schools for more than seven years, becoming the longest-serving, big-city education superintendent in the country. He ran the Ariel Education Initiative, focused on advancing educational opportunities in economically disadvantaged areas from 1991 to 1998.

Additionally, ASU will award honorary degrees to Pamela Matson, Freeman A. Hrabowski, III, and Joseph E. Stiglitz for their trailblazing contributions in their respective fields.

Hrabowski, president of the University of Maryland Baltimore County (UMBC), was recently named by President Obama to chair the newly created President’s Advisory Commission on Educational Excellence for African Americans and serves as a consultant to the National Science Foundation, the National Institutes of Health, the National Academies, and universities and school systems nationally.

Pamela Matson will receive the Doctor of Science honoris causa for her pioneering work in environmental science.

A professor at Stanford University, Matson has authored more than 175 publications addressing a range of environment and sustainability issues, and has been awarded the prestigious MacArthur Fellowship in recognition of the significance of her work.

Joseph E. Stiglitz will receive the Doctor of Science honoris causa for his contributions to the field of economics.

A University Professor of Columbia University, Stiglitz is is a Nobel Prize-winning economist who is credited with creating a new branch of economics, called “the economics of information.” Stiglitz has authored numerous books and publications, including his recent work “The Price of Inequality: How Today’s Divided Society Endangers Our Future,” which has won prestigious journalism and literary awards. He recently became a member of France’s Legion of Honor.

The New College of Interdisciplinary Arts and Sciences on ASU's West campus will be graduating 511 students this spring, while the College of Technology and Innovation on ASU's Polytechnic campus will be sending out 320 proud undergraduate and graduate students into the world.

The Ira A. Fulton Schools of Engineering will say goodbye to more than 1,400 undergraduate and graduate students.

The School of Letters and Sciences will graduate 650 undergraduate and graduate students, who have completed degrees based on the Downtown Phoenix campus, the Polytechnic campus, the Tempe campus, and through a pioneering partnership at Eastern Arizona College.

Free parking will be available throughout the Tempe campus, except for metered spaces and residence hall lots. Parking information for commencement and convocation ceremonies can be found here: https://cfo.asu.edu/pts-parking-commencement.

*A prior version of this story cited an estimated total of more than 10,000 undergraduate students graduating this semester. That estimate has been updated.

Arizona State University alumni can find Sun Devil-owned businesses nationwide, thanks to the Sun Devil Business Directory, which recently was launched by the ASU Alumni Association.

Alumni of Arizona State University can find Sun Devil-owned businesses nationwide, thanks to the Sun Devil Business Directory, which recently was launched by the ASU Alumni Association. The directory is the association’s latest engagement tool, and allows graduates of the university to connect with ASU-affiliated professionals and entrepreneurs. The site is now live, at SunDevilBusinessDirectory.com.

Since announcing the debut of the site in early April, the Alumni Association has promoted it through comprehensive email campaigns, magazine ads and web advertising. These efforts have continued to bolster a growing number of site users and awareness for this new Sun Devil resource.

“SunDevilBusinessDirectory.com provides alumni and the university community with a means to advertise and do business with an exclusive network of fellow Sun Devils,” said Christine K. Wilkinson, ASU Alumni Association president. “ASU alumni now can search easily for and locate businesses, services and special discounts provided by alumni-owned or -operated businesses.”

Advertising on the website is open to all ASU alumni and members of the association. Businesses advertising on the site may choose from Basic, Plus and Premium pricing plans, which offer increasing levels of features to increase their exposure on the site and provide information on how their listing is performing.

The website’s public access allows maximum exposure for participating businesses; revenue generated by the business listings helps support Alumni Association programs and services. The Sun Devil Business Directory is online at http://www.SunDevilBusinessDirectory.com. To inquire about advertising with the directory, send a message through the form at http://www.sundevilbusinessdirectory.com/contact-us, or call 1-877-898-7363.