In the new LROC images, a team of researchers discovered small, narrow trenches typically only hundreds to a few thousand meters (yards) long and tens to hundreds of meters wide, indicating the lunar crust is being pulled apart at these locations. These linear troughs or valleys, known as graben, are formed when crust is stretched, breaks and drops down along two bounding faults. A handful of these graben systems have been found across the lunar surface. The team proposes that the geologic activity that created the graben occurred less than 50 million years ago (very recent compared to the Moon’s current age of over 4.5 billion years).

In August, 2010, the team identified physical signs of contraction on the lunar surface, in the form of lobe-shaped ridges or scarps (known as lobate scarps), using LROC images. They suggest that these scarps indicate the Moon shrank globally in the geologically recent past and might still be shrinking today. The team saw these scarps widely distributed across the Moon and concluded that it was shrinking as the interior slowly cooled. The new images of graben therefore present a contradiction – regions of the lunar crust that are being pulled apart as the Moon shrinks.

“We think the Moon is in a general state of global contraction due to cooling of a still hot interior. The graben tell us that forces acting to shrink the Moon were overcome in places by forces acting to pull it apart,” says Thomas Watters of the Center for Earth and Planetary Studies at the Smithsonian’s National Air and Space Museum, lead author of a paper on this research appearing in the March issue of the journal Nature Geoscience. “This means the contractional forces shrinking the Moon cannot be large, or the small graben might never form.”

The small graben indicate that contractional forces in the lunar crust are relatively weak. The weak contraction indicates that unlike the terrestrial planets – Mercury, Venus, Earth, and Mars – the Moon did not completely melt in the very early stages of its evolution. Instead, an alternative scenario better fits the observations: only the Moon’s exterior initially melted forming a magma ocean.

“It was a big surprise when I spotted graben in the farside highlands,” says Mark Robinson of the School of Earth and Space Exploration at Arizona State University, coauthor and principal investigator of LROC. “I immediately targeted the area for high resolution stereo images so we could create a 3-dimensional view of the graben.  It’s exciting when you discover something total unexpected. Only about half the lunar surface has been imaged in high resolution. There is much more of the Moon to be explored.”

As the LRO mission progresses and coverage increases, scientists will have a better picture of how common these young graben are, and more importantly, what other types of tectonic features are nearby. The number of graben systems the team finds may help scientists refine the state of stress in the lunar crust.

Myles V. Lynk, from the College of Law, chaired meetings, presented an award and testified before the American Bar Association's Ethics 20/20 Commission at the ABA's 2012 Midyear Meeting.

Myles V. Lynk, the Peter Kiewit Foundation Professor of Law and the Legal Profession at the College of Law, chaired meetings, presented an award and testified before the American Bar Association’s Ethics 20/20 Commission at the ABA’s 2012 Midyear Meeting, Feb. 1-7, in New Orleans.

As chair of the Standing Committee on Professional Discipline (the Discipline Committee), Lynk testified before the ABA’s Ethics 20/20 Commission about its proposal to add a new comment to Model Rule of Professional Conduct 1.7. It that would permit attorneys and clients involved in multijurisdictional matters to choose which jurisdictions’conflicts-of-interest rules would apply to their representation. 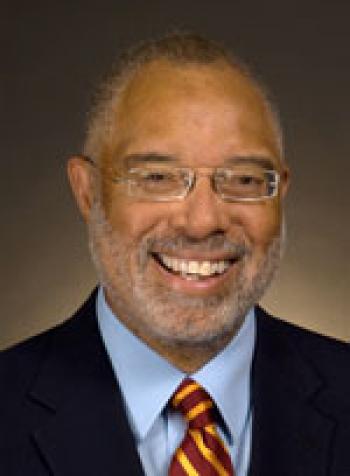 Also in his capacity as chair of the Discipline Committee, Lynk co-chaired a public hearing on amendments to the Model Judicial Code and the Model Rules of Professional Conduct that are being proposed jointly by the Discipline Committee and the ABA’s Standing Committee on Ethics and Professional Responsibility. The changes have to do with the standards for the judicial disqualification of elected state judges from contested proceedings in which one or more parties or attorneys have made significant contributions to their election campaign or to an opponent’s campaign. The Discipline Committee also presented a resolution before the ABA House of Delegates, regarding the ABA Standards for Imposing Lawyer Sanctions.

As Chair-elect of the national Fellows of the American Bar Foundation, Lynk presented the Outstanding Scholar Award to Professor Joan Williams of the University of California Hastings College of the Law at the Foundation’s annual banquet.

Lynk’s areas of interest include business law, civil procedure, legal ethics, bioethics in health care and law and literature. He is a Faculty Fellow in the Center for Law, Science & Innovation’s Public Health Law and Policy Program, and an Affiliated Faculty in Justice and Social Inquiry, at the ASU School of Social Transformation. In 2008-2009, Lynk was a Visiting Honors Faculty Fellow in ASU’s Barrett, The Honors College. In 2010, he received the Outstanding Faculty Award from the College of Law’s Alumni Association. From 2004 to 2010, he served as ASU’s NCAA Faculty Athletics Representative.