According to the United Nations’ 2011 Revision of World Urbanization Prospects, global urban population is expected to gain more than 2.5 billion new inhabitants through 2050. Such sharp increases in the number of urban dwellers will require considerable conversion of natural to urban landscapes, resulting in newly developing and expanding megapolitan areas. 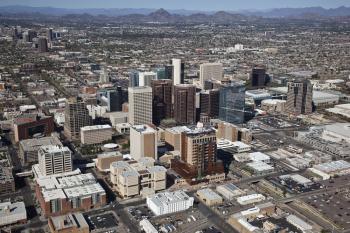 In the first study of its kind, attempting to quantify the impact of rapidly expanding megapolitan areas on regional climate, a team of researchers from Arizona State University and the National Center for Atmospheric Research has showed that local maximum summertime warming resulting from projected expansion of the urban Sun Corridor could approach 4 degrees Celsius.

This finding, reported in the journal Nature Climate Change, establishes that this factor can be as important as warming that results from increased levels of greenhouse gases.

Arizona’s Sun Corridor is the most rapidly-growing megapolitan area in the United States. Nestled in a semi-arid environment, it is composed of four metropolitan areas: Phoenix, Tucson, Prescott and Nogales. With a population projection expected to exceed 9 million people by 2040, the developing Sun Corridor megapolitan provides a unique opportunity to diagnose the influence of large-scale urbanization on climate, and its relation to global climate change.

"We posed a fundamental set of questions in our study, examining the different scenarios of Sun Corridor expansion through mid-century," says Matei Georgescu, lead author and assistant professor in the School of Geographical Sciences and Urban Planning in ASU’s College of Liberal Arts and Sciences. "We asked, ‘what are the summertime regional climate implications, and how do these impacts compare to climate change resulting from increased emissions of greenhouse gases?'"

The study’s authors used projections of Sun Corridor growth by 2050 developed by the Maricopa Association of Governments, the regional agency for metropolitan Phoenix tasked with providing long-range and sustainably-oriented planning. Incorporating maximum- and minimum-growth scenarios into a state-of-the-art regional climate model, the researchers compared these impacts with experiments using an urban representation of modern-day central Arizona.  Their conclusions indicate substantial summertime warming.

“The worst-case expansion scenario we utilized led to local maximum summer warming of nearly 4 degrees Celsius," said Georgescu. "In the best-case scenario, where Sun Corridor expansion is both more constrained and urban land use density is lower, our results still indicate considerable local warming, up to about 2 degrees Celsius.”

An additional experiment was conducted to examine an adaptation where all of the buildings were topped by highly reflective white or “cool” roofs.

“Incorporating cool roofs alleviated summertime warming substantially," says Georgescu, "reducing the maximum local warming by about half. But another consequence of such large-scale urbanization and this adaptation approach also include effects on the region’s hydroclimate."

The cool roofs, like the maximum-growth scenario without this adaptation approach, further reduce evapotranspiration – water that evaporates from the soil and transpires from plants.

However, the authors say that pinning precise figures on the relative contribution of each effector is difficult.

“The actual contribution of urban warming relative to summertime climate change warming depends critically on the path of urbanization, the conversion of natural to urban landscapes, and the degree to which we continue to emit greenhouse gases,” says Alex Mahalov, a co-author of the Nature Climate Change article and principal investigator of the National Science Foundation grant, “Multiscale Modeling of Urban Atmospheres in a Changing Climate,” which supported the research.

“As well as providing insights for sustainable growth of the Sun Corridor and other rapidly expanding megapolitan areas, this research offers one way to quantify and understand the relative impacts of urbanization and global warming,” says Mahalov, who is the Wilhoit Foundation Dean’s Distinguished Professor in the School of Mathematical and Statistical Sciences at ASU.

The group conducted their numerical simulations using an “ensemble-based” approach. By modifying their model’s initial conditions and repeating their simulations a number of times, they were able to test the robustness of their results. In all, nearly half of a century of simulations were conducted.

Georgescu says that one take-home message from this study is that the incorporation of sustainable policies need to extend beyond just greenhouse gas emissions. He also stresses the importance of extending adaptation strategies beyond the focus on mere average temperature.

“Truly sustainable adaptation, from an environmental standpoint, must extend to the entire climate system, including impacts on temperature and hydrology,” he says.

The study’s co-authors also included Mohamed Moustaoui, an associate professor in ASU’s School of Mathematical and Statistical Sciences, and Jimy Dudhia, a project scientist in the Mesoscale and Microscale Meteorology Division at the National Center for Atmospheric Research. All three ASU co-authors are affiliated with ASU’s College of Liberal Arts and Sciences and the Global Institute of Sustainability.

Children draw their feelings about future of water

"The Science of Water Art: A Citizen Science Project" will be on display at ASU's Deer Valley Rock Art Center Sept. 1-30.

Children draw their feelings about future of water

“The Science of Water Art: A Citizen Science Project” – a collaborative research project that brings together professionals, community members, college students and children to think about the role that water plays in each of our lives – will be on display Sept. 1-30 at ASU’s Deer Valley Rock Art Center.

The project is part of a larger global ethnohydrology study that is starting its fifth year with a look at the role of water, climate change and health in several communities worldwide. The study is sponsored by ASU's School of Human Evolution and Social Change (SHESC). 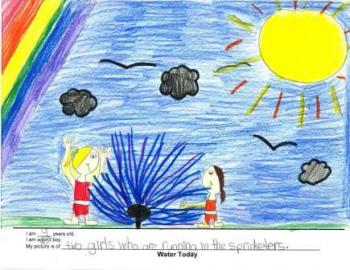 The art facet of this study allows for a look into how climate change and water insecurity are viewed by younger generations, and gives a voice to children so that they may share their outlooks on this vital resource.

This study used a sample of fourth-grade classrooms across Arizona in collecting more than 3,000 drawings of children's perception of water today and in the future. The nine- to 11-year-olds were asked by their teachers to draw two pictures with the following prompts: 1) Please draw a picture showing water being used in your neighborhood; and 2) Please draw a picture showing how you imagine water will be used in your neighborhood 100 years from now.

The exhibit is free with museum admission: $7 adults; $4 seniors, military and students; $3 children 6-12. Children 5 and younger are free.