Arizona State University was one of more than 50 teams from around the world to test its Moon-mining robot design in the third annual Lunabotics Mining Competition. The event was held at the Kennedy Space Center Visitor Complex in Florida May 21-26.

The international competition challenged university teams to design and build a remote controlled or autonomous excavation robot called a lunabot. The teams’ robots went head-to-head to determine which could mine and deposit the most simulated lunar soil within 10 minutes. Teams were judged on their robot’s dimensions and mass, regolith collection, dust mitigation, bandwidth and power usage, and the ability to control the lunabot from a remote control center. 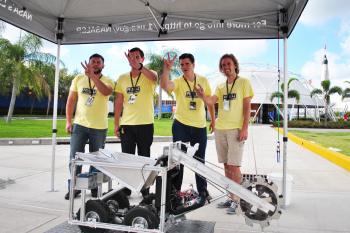 The event drew teams from as far away as Bangladesh and Romania and included competitors from all across the United States. Top honors in the competition went to University of Alabama for earning the most cumulative overall points and Iowa State University for collecting and depositing the most regolith.

“We went into the competition with high hopes, but we were realistic since this was our first year competing,” says Ben Stinnett, leader of the ASU Lunabotics team. “We would have loved to walk away with a prize, but we are happy with the amazing experiences we gained at this event.”

The team’s efforts are the latest in a rapidly growing program in robotics and engineering in ASU’s School of Earth and Space Exploration (SESE), which combines science and engineering to produce the next generation of explorers.

“I would not have been able to build this robot without my SESE classes, especially Mark Robinson’s and Paul Scowen’s Exploration Systems Engineering class (SES 405). That completely changed everything we were doing with the design of the robot,” says Crowell. “Without Electronics Instrumentation (SES 330) with Chris Groppi, I wouldn’t have been able to make all the circuits we needed, nor would I have known what a transistor is or what a resistor does.”

In the first round of the competition, the ASU team had complete control of their lunabot, but they were unable to get out of the rut they started in. In round two, the team was unable to establish communication with the lunabot.

"With the limited resources and time that the lunabotics team had, they performed admirably. They gained valuable real-world knowledge that will be useful for the next year's competition," says Saripalli.

“This year was riddled with oversights. We came to the competition with a team of mostly freshmen, with no robotics experience – no one on our team had ever built a robot or competed in a robotics competition – so it was year of growing pains and learning experiences,” says Stinnett.

Next year, the team would like to secure more sponsorship so they are not only able to afford higher-quality materials but so that they can bring more people to Florida.

“Most of our team stayed back in Tempe providing moral support. It’s kind of sad that we’re here with their hard work and they’re not able to be here with us when other teams have 20 or 30 people with them,” says Stinnett.

Budgetary issues were a huge concern for the team. The average budgets for teams in previous years were listed at upwards of $30,000. The ASU team worked within a $5,000 budget.

In lieu of monetary contributions, some local companies in the valley supported the team with donations of materials: Microchip donated microprocessors and development chips; IGUS donated plastic parts to protect wires; and HeatSync Labs in downtown Mesa, a collaborative working environment for scientists and engineers, opened its doors to the students and assisted with questions and problems.

“Being a part of this competition has made me feel much more confident about going into the workforce and has given me an experience that I can expound upon in interviews. You really do need “real” experience, like this competition provided – projects beyond just coursework,” explains Crowell.

ASU’s Lunabotics team is sponsored by its sister organization SEDS (Students for the Exploration and Development of Space), the School of Earth and Space Exploration, and the Autonomous System Technologies Research & Integration Laboratory.

Images are posted on Kennedy’s Media Gallery at: http://mediaarchive.ksc.nasa.gov

Additional images and videos are on the SESE Facebook Fan Page: http://www.facebook.com/SESE.at.ASU

For information about the competition, visit: http://www.nasa.gov/lunabotics

Baseball rallies from five down, falls to Arizona, 8-7

The Sun Devils scored six straight runs before allowing the game-winner in the ninth.

Baseball rallies from five down, falls to Arizona, 8-7

The 16th-ranked Arizona State baseball team, in their final game of the 2012 season, rallied back from a 5-0 deficit, but fell on a walk-off single, 8-7 to 13th-ranked Arizona on Sunday at Hi Corbett Field in Tucson, Ariz.

The Sun Devils spotted Arizona a 7-1 lead through the first three innings, including four runs in the first frame, before scoring six straight runs and holding the Wildcats scoreless over the next five innings to tie the game at seven in the eighth.

ASU scored three runs in the fifth, one in the sixth and two in the eighth before Arizona scored the game-winning run on a walk-off single by Johnny Field in the bottom of the ninth.

Right-hander Robert Ravago walked the second Wildcat of the ninth inning and gave up a single to Joey Rickard two batters later to bring Field to the plate with runners on first and third with two outs.

"They did this program proud," head coach Tim Esmay said. "These kids were committed to playing for the Maroon and Gold all season, and they showed that today."

The Sun Devils finished the season with a 36-20 record, including 18-12 in conference play, to tie for third in the Pac-12 standings. Esmay led the baseball program to its 50th straight 30-win season, which is the longest current streak in Div. 1 baseball, and orchestrated six three-game series sweeps for the second time in his three seasons at ASU. The team swept four straight Pac-12 home series' for the first time since 1988 and only the third time in program history.

Senior Abe Ruiz, playing in his final collegiate game for the Sun Devils, went 3-for-4 with four RBI as he spearheaded the ASU rally. Andrew Aplin finished the three-game series with seven hits and three RBI.

Joey DeMichele added a pair of hits and an RBI, and Kasey Coffman recorded three hits and scored two runs in the game.

Freshman left-hander Adam McCreery, making just his fourth appearance this season, entered the game in the fourth and pitched 3 2/3 scoreless innings. He gave up just two hits while striking out three.

The Wildcats (38-17, 20-10) put up four runs on four hits in the first inning to take the early lead, 4-0. Their first six batters reached base on a combination of base hits, fielder's choices and a throwing error to chase starting right-hander Alex Blackford out of the game.

ASU got on the scoreboard in the third inning courtesy of an RBI sacrifice fly by DeMichele to cut the deficit to four, 5-1 after Arizona tacked on a run in the bottom of the second.

Arizona added a pair of runs in the bottom of the third on two RBI singles, but the Sun Devils countered with three runs in three consecutive at-bats in the top of the fifth to bring them within three, 7-4. Ruiz brought home Aplin on a sacrifice fly, James McDonald hit an RBI double down the right-field line and Max Rossiter added a run-scoring single.

Ruiz hit an RBI single in the sixth inning to score Coffman from third, and recorded a two-run double in the eighth to bring Deven Marrero home from second and DeMichele around from third, and tie the game, 7-7.

Blackford allowed four runs, including one earned, one four hits in 34 pitches. Right-hander Joseph Lopez replaced him with one out in the first inning and induced a strikeout and a groundout to end the frame.

Lopez allowed three runs on six hits in 2 2/3 innings and Ravago gave up one run on two hits in two innings.