The most accurate laboratory measurements yet made of magnetic fields trapped in grains within a primitive meteorite are providing important clues to how the early solar system evolved. The measurements point to shock waves traveling through the cloud of dusty gas around the newborn sun as a major factor in solar system formation.

The results appear in a paper published Nov. 13 in the journal Science. The lead author is graduate student Roger Fu of MIT, working under Benjamin Weiss; Steve Desch of Arizona State University's School of Earth and Space Exploration is a co-author of the paper. 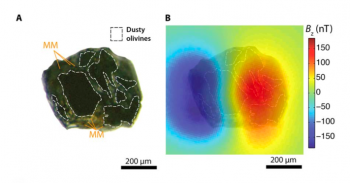 "The measurements made by Fu and Weiss are astounding and unprecedented," says Desch. "Not only have they measured tiny magnetic fields thousands of times weaker than a compass feels, they have mapped the magnetic fields' variation recorded by the meteorite, millimeter by millimeter."

It may seem all but impossible to determine how the solar system formed, given it happened about 4.5 billion years ago. But making the solar system was a messy process, leaving lots of construction debris behind for scientists to study.

Among the most useful pieces of debris are the oldest, most primitive and least altered type of meteorites, called the chondrites (KON-drites). Chondrite meteorites are pieces of asteroids, broken off by collisions, that have remained relatively unmodified since they formed at the birth of the solar system. They are built mostly of small stony grains, called chondrules, barely a millimeter in diameter.

Chondrules themselves formed through quick melting events in the dusty gas cloud – the solar nebula – that surrounded the young sun. Patches of the solar nebula must have been heated above the melting point of rock for hours to days. Dustballs caught in these events made droplets of molten rock, which then cooled and crystallized into chondrules.

As chondrules cooled, iron-bearing minerals within them became magnetized like bits on a hard drive by the local magnetic field in the gas. These magnetic fields are preserved in the chondrules even down to the present day.

The chondrule grains whose magnetic fields were mapped in the new study came from a meteorite named Semarkona, after the place in India where it fell in 1940. It weighed 691 grams, or about a pound and a half.

The scientists focused specifically on the embedded magnetic fields captured by "dusty" olivine grains that contain abundant iron-bearing minerals. These had a magnetic field of about 54 microtesla, similar to the magnetic field at Earth’s surface, which ranges from 25 to 65 microtesla.

Coincidentally, many previous measurements of meteorites also implied similar field strengths. But it is now understood that those measurements detected magnetic minerals contaminated by Earth’s magnetic field, or even from hand magnets used by meteorite collectors.

"The new experiments," Desch says, "probe magnetic minerals in chondrules never measured before. They also show that each chondrule is magnetized like a little bar magnet, but with 'north' pointing in random directions."

This shows, he says, they became magnetized before they were built into the meteorite, and not while sitting on Earth’s surface.

"My modeling for the heating events shows that shock waves passing through the solar nebula is what melted most chondrules," Desch explains. Depending on the strength and size of the shock wave, the background magnetic field could be amplified by up to 30 times.

He says, "Given the measured magnetic field strength of about 54 microtesla, this shows the background field in the nebula was probably in the range of 5 to 50 microtesla."

There are other ideas for how chondrules might have formed, some involving magnetic flares above the solar nebula, or passage through the sun’s magnetic field. But those mechanisms require stronger magnetic fields than what is measured in the Semarkona samples.

This reinforces the idea that shocks melted the chondrules in the solar nebula at about the location of today's asteroid belt, which lies some two to four times farther from the sun than Earth now orbits.

Desch says, "This is the first really accurate and reliable measurement of the magnetic field in the gas from which our planets formed."

Before departing Fiji last summer, the latest group of ASU study abroad participants decided they wanted to leave their hosts with more than their gratitude.

Fiji’s Votua Village has been welcoming Arizona State University study abroad students for years, providing what is often the highlight of a program that focuses on culture, the environment and health.

What makes the village experience so meaningful to the students is that the villagers appear to have so little yet give so much. Their homes are meagerly stocked and modest – usually concrete slabs and walls, some without doors or electricity – yet they invite students in as family, giving up their beds, preparing meals for them and happily sharing their resources. 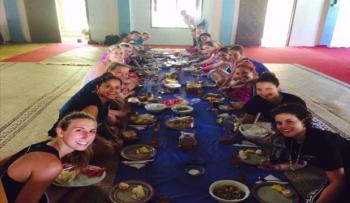 Before departing Fiji last summer, the latest group of study abroad participants decided they wanted to leave their hosts with more than their gratitude.

“All of the students discussed the need they saw there for simple medical supplies that we all have in our cupboards at home,” says Brooklyn Elkan, a double major in global health and nursing.

So, students and faculty took up a collection. Elkan, who stayed behind for a short vacation with her husband, bought supplies specified by the local nurse and delivered them. She was amazed at how much $300 purchased in Fiji and how simple the needs were – items like cream for scabies, Band-Aids and crutches.

Anthropology and sustainability undergraduate Colby Howell personally and painfully learned about the medical supply shortage when she broke her foot during her study abroad trip. Her foot was immobilized in papier-mâché, and she left the hospital without crutches, as all eight sets had already been loaned to the public.

Howell’s make-shift cast dissolved after a couple of days, and she spent most of her visit walking on her broken foot, until eventually locating and borrowing a pair of crutches from a local. Her experience provided an example to her entire group about the reality of health care in the area.

Associate professor Jameson Wetmore of the School of Human Evolution and Social Change in the College of Liberal Arts and Sciences led the Fiji program and witnessed the students’ journey toward advocacy and humanitarianism.

“On our last trip we were startled to find out that, while they have a very capable nurse in the village, she doesn’t have any supplies,” Wetmore explains.

Back in the U.S., the students continued to brainstorm and collaborate on ways to effect change in Votua. They have now launched a PitchFunder campaign to raise money for basic medical necessities, as well as much-needed everyday items – like diapers and personal hygiene products – that are not affordable or readily available to the villagers.

Leading the initiative is PitchFunder account manager and global health major Ha Mai, who fell in love with Votua’s children. She became worried about their access to preventive or routine health care and decided to put her background in crowdfunding to work for them and their families.

“This project is a chance for ASU to give back and strengthen the bonds we’ve formed over the years. And I’m very impressed by the fact that the project is completely student motivated,” Wetmore says. “The students are not just learning about global health, they’ve taken the initiative to improve it.”

To donate to the Funds for Fiji project, visit the ASU Foundation site.