Made in the shade: ASU team crunches data on how best to cool urban areas

It’s debatable what can kill you faster in an Arizona summer: the sun or the electric bill.

Anyone owning a home can recite the litany of summer woes. The dawn patrol to cut the lawn before the really bad heat hits. The power bill the size of a BMW payment. The neighborhood stroll abbreviated by solar assault. 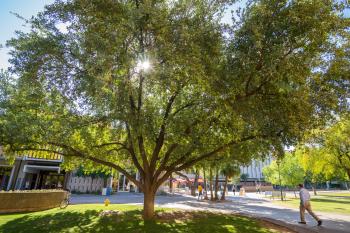 It's common sense that the shade provided by trees — such as this Southern live oak on ASU's Tempe campus — and other structures help make an environment more comfortable. But how much shade is needed, and what surface materials can help? An ASU team has measured for the first time precisely how much cooler different elements can make an environment. Photo by: Charlie Leight/ASU News Download Full Image

Anything that lives knows the answer to all of that is shade. From fish to people, getting out from under the solar blast is the key to comfort.

ASU studies on microclimates and urban climate have measured for the first time precisely how much cooler different elements can make an environment — information highly useful to architects and urban planners.

“The reason you would want those detailed numbers is if you’re doing design work in an urban area,” said Ben Ruddell, associate professor in the Polytechnic School, part of the Ira A. Fulton Schools of Engineering. Ruddell and his colleagues have worked on several studies on shade and urban climate. “In the past that design work has not been evidence-based, but now we can tell you exactly what the effect is going to be on that microclimate.”

“Name your materials and we can give you the numbers,” he said.  “We now have the data to tell them exactly what techniques to use. … We’ve got the data; we’re open for business. Give us a call.”

Shading helps cool the landscape underneath it. It also helps reduce home energy use and create beneficial microclimates for growing different types of plants. The type of shade doesn’t matter much: trees, shade sails, ramadas and pavilions all have roughly the same effect, according to researchers.

“The main effect is keeping all that solar energy from impacting you or your house,” Ruddell said. “Shade is very effective at cooling off what’s underneath.”

If homeowners have an environment where they can keep the sun from hitting the house, they can save significantly on their energy bill, said Nancy Selover, research professor in the School of Geographical Sciences and Urban Planning and state climatologist.

Shade structures, awnings, vine-covered trellises will all work. Rooftop solar panels will intercept the sun while air flows beneath them to cool the attic.

“It doesn’t just have to be a tree,” Selover said. “Whatever you can do to keep the sun from hitting the surface.”

How much shade is enough shade?

“If I have a 1-acre plot of land, what percentage do I need shaded?” Selover said. “Unfortunately, you need a large percentage of shade. If you only have a little bit shaded, it’s not going to be helpful.”

Ariane Middel, assistant research professor in the School of Geographical Sciences and Urban Planning, is working on studies of how much trees affect human comfort.

“It’s pretty hot here, and summers are pretty miserable,” she said. “In terms of thermal comfort what’s even more important than temperature is the radiated environment. It’s the solar radiation that determines how comfortable you feel. We looked at the impact of trees on thermal comfort.”

They found that naturally mesic neighborhoods are cooler because of the grass and trees. There was little difference between the xeric and oasis neighborhoods.

“The little grass patches didn’t make a difference,” she said.

Researchers found during the mid-afternoon heat being under a tree means being 8 degrees more comfortable than standing in the sun.

Homeowners should plant trees by the front porch or around seating areas in the back yard.

“If you’re going to plant trees, you want to plant them in locations where they make a difference — where people are,” Middel said.

There needs to be more shade in places where people are outside, said Ruddell, like business districts, around mass transit and over playgrounds.

Ruddell has a paper in review with a colleague from Texas Tech. One of the clearest findings is that shade plays a huge role in keeping playgrounds safe. Kids are more vulnerable to heat than adults are, and many playgrounds aren’t shaded.

“It needs much more attention than it’s getting,” he said. “We have taken readings in excess of (194 degrees Fahrenheit) on surfaces kids would play on and touch. To put that in perspective, that temperature is far in excess of the standard for factory workers to touch anything. … That’s hot enough to burn you, and certainly hot enough to make your uncomfortable.”

Homeowners should be reminded that Salt River Project will give free shade trees to qualifying homeowners.

Solutions Ira A. Fulton Schools of Engineering The College of Liberal Arts and Sciences Engineering Environment

“It’s going to be messy,” Sarah Beal told the room full of educators on Wednesday morning.“But you have to create that sense of urgency to make the changes that need to happen.”She was talking about the need to reinvent teacher training, a shift that the Mary Lou Fulton Teachers College has tackled for the past four years.It’s why experts from 30 educational institutions gathered in Ph...

“It’s going to be messy,” Sarah Beal told the room full of educators on Wednesday morning.

“But you have to create that sense of urgency to make the changes that need to happen.” 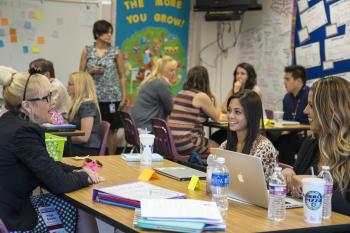 She was talking about the need to reinvent teacher training, a shift that the Mary Lou Fulton Teachers College has tackled for the past four years.

It’s why experts from 30 educational institutions gathered in Phoenix this week to learn how Arizona State University reversed a model that was entrenched for decades.

It was hard work, Beal told the Excellence at Scale: ASU iTeachAZ Conference, and it’s not done yet.

Beal, executive director of college partner grants, was on the team that reworked the program. Starting in 2010, coursework became harder and students were held to a rigorous accountability system. In 2011, seniors were offered a chance to become immersed in a “residency.”

In just a few years, the changes have produced results. According to the teachers’ college, of the students who completed the iTeachAZ residency program, 92 percent are still teaching in Arizona. That compares with a first-through-third-year teacher retention rate of 80 percent nationally and 76 percent in Arizona.

The American Association of Colleges for Teacher Education, an online database highlighting innovative practices, cited iTeachAZ as a program that gives teacher candidates a competitive edge in the field.

The reinvention was driven by a realization that the old model wasn’t working anymore.

“Over the years, at teachers’ colleges, faculty have owned their courses. They have complete autonomy, and their teaching is somewhat isolated from the program as a whole,” Beal said.

“This is urgent,” Beal said. “Our students need good teachers.”

She said research has found that many students in teacher-prep programs got good grades and went on to be highly evaluated as teachers, but those results were not translating into student achievement.

“When they don’t feel their teachers are modeling good instruction, they get angry about that. And they should.”

Convincing faculty to change was the biggest challenge.

The team had to overcome the natural tensions between tenured faculty, who focus on research, and the clinical staff, which emphasizes teaching. One way they did that was to videotape each other while teaching, then critique the results together. Some of the faculty members hadn’t taught a classroom lesson in years, and the exercise reinforced the importance of their shared mission.

Margarita Jimenez-Silva, associate professor at the Mary Lou Fulton Teachers College, was also on the team. She said the group had to reassure tenured faculty who were concerned the changes could compromise their academic freedom.

“But at the end of the day, it’s not about your research, it’s about making the best teachers we can,” Jimenez-Silva said.

Among the biggest innovations was iTeachAZ, launched in 2011, which places groups of seniors into a yearlong residency in a school district. The students work alongside teacher-mentors for the entire academic year, not just one semester.

At the same time, the student-teachers still take ASU coursework. And instead of returning to one of the campuses, they attend classes at the school where their site coordinators teach them coursework.

About 30 districts now partner with ASU by hosting iTeachAZ candidates.

Janet Tobias, a principal of Kyrene de la Paloma Elementary School in Chandler, said, “I see a reflectiveness in the iTeachAZ candidates, which is what I’m looking for in a teacher, because if you’re reflecting, you’re growing.”

She said that the accountability is rigorous.

“We have seen that if the teacher candidates aren’t cutting it, the mentors are brave enough to say, ‘This isn’t going to work out,’ ” Tobias said.

ASU’s work is not done, Beal said. The iTeachAZ method is now offered only for teachers training in K-8 schools, not high schools.

“And not all teacher-educators are on board,” she said.

On Wednesday, a room full of conference participants cited faculty resistance as the biggest obstacle they face in importing ASU’s methods at their institutions.

“What resonates is how worried the university is about being evaluated according to the same standards that we expect our teachers to perform at,” said Jennifer Tuttleton, director of school improvement in the Ascension Parish Schools in Louisiana.

She praised the changes that the Mary Lou Fulton Teachers College has made.

“Teachers are faced with high accountability. Their jobs are on the line, and I love this initiative.”