Tony Award winner Lemon Andersen, the critically acclaimed and award-winning stage, film and poetry artist, is set to make his Arizona premiere of his one-man autobiographical show, "County of Kings."

The show creates a vivid portrait of his adverse yet often humorous coming-of-age experiences while growing up in Brooklyn in the 80s and 90s. Andersen’s performance touches on young love, sibling rivalry, juvenile crime, addiction and ultimately personal triumph in this moving one-man journey toward self-discovery and redemption.

Tickets are on sale now for the Oct. 5-6 performances for $25 at asugammage.com and at the ASU Gammage Box Office.

Born and raised in Brooklyn, after his childhood struggles, Anderson became an acclaimed spoken word and poetry artist and was an original cast member of the Tony Award-winning Russell Simmons Def Poetry Jam on Broadway. Anderson also was nominated for a Drama Desk Award for his writing and work on the show. He performed and sold out venues such as the Nuyorican Poets Cafe, Apollo Theater, Chicago Theater and Hollywood’s Kodak Theater County of Kings was originally presented by Spike Lee at the Public Theater in New York and ran for six weeks.

Andersen’s "County of Kings" is part of ASU Gammage’s 2012-2013 BEYOND series which for 21 years has evolved into a carefully curated series that brings world-class artists into the community. The artists selected present compelling work while connecting with Valley residents through artist residency programs, master classes and public performances.

And then there were 4: W. P. Carey, College of Liberal Arts and Sciences head to semi-finals

Four teams and just one championship trophy: The 2012 ASU Academic Bowl is heading into the final rounds of competition.

And then there were 4: W. P. Carey, College of Liberal Arts and Sciences head to semi-finals

The action-packed conclusion of the ASU Academic Bowl's opening rounds Tuesday night brought four teams to the forefront of the competition, as the College of Liberal Arts and Sciences Maroon team and the W. P. Carey School of Business team advanced to the semi-finals.

The two teams will be joining the College of Technology and Innovation team and the Ira A. Fulton Schools of Engineering Maroon team Thursday night, on the Downtown Phoenix campus, to see which team out of the four will be crowned the 2012 Academic Bowl Champion, taking home $24,000 in scholarship money. 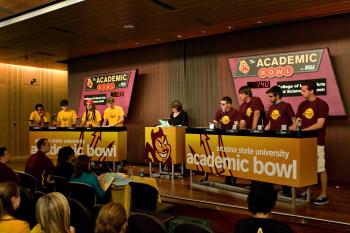 Learn about how the game is played here.

Moderating the first half of the night was Jeanne Wilcox, associate dean and professor in ASU's Mary Lou Fulton Teachers College.

In the first opening round matchup of the second night, the College of Public Programs went head to head with the Ira A. Fulton Schools of Enginering Gold team – a match that was slow to get off the ground. However, the engineers secured an early lead with a question about the theory of relativity, while College of Public Programs picked up 30 points for a not-so-elementary set of bonus questions about Sherlock Holmes.

For 10 points each, the Engineering Gold team successfully named several classes of acids to nearly double their lead over Public Programs – a lead that widened despite the team's lack of knowledge of famous composers made evident in a bonus series. Questions pertaining to the Occupy Wall Street movement and Aretha Franklin's musical career gave both teams a handful of points each, and the final score of 275-90 would prove Engineering Gold the winner.

Controversy emerged later in the evening, as the event's organizers discovered that the timer had been silenced and thus the match had gone over the allotted 15-minute time. The judges made a decision to record the final score as it stood at the match's 15-minute mark – a score of 196-60 rather than 275-90 – and the first half of the night's opening rounds continued as normal.

The two teams from the College of Liberal Arts and Sciences – one Gold and the other Maroon – faced off in the second match of the first half. Gold racked up close to 100 points before Maroon had a chance to come alive on the scoreboard. Questions about the Kennedys kicked a few points Maroon's way, and soon the score had evened. Displaying their knowledge of cell biology, Maroon sped past Gold. "The Hundred Years' War," "The English Channel" and "Casey at the Bat" were all answers CLAS Maroon did not strike out on.

Maroon's streak came to a halt when Gold snatched a toss-up and quickly gained ground through a series of "Snow White" bonus questions. Types of cactus and British literature strenthened Gold's score, which then trailed Maroon's by 40 points. Although a valiant effort by CLAS Gold to catch up, in the end it wasn't enough. When the buzzer went off, CLAS Maroon stood victorious with a final score of 190-140.

The winners of the previous matches –  Engineering Gold and College of Liberal Arts and Sciences Maroon – battled it out in the third matchup. Shakespeare, island nations, politics and Alexander Hamilton were subjects that led both teams to their first stack of points. While CLAS Maroon struggled with some math questions, it was obvious to all they knew their Robin Hood and Greek gods and goddesses.

Trailing by 80 points, a dejected-looking Engineering watched as the College of Liberal Arts and Sciences fired out titles to Broadway musicals (complete with celebratory dance). CLAS Maroon maintained their lead and won the match with a final score of 185-80.

With three minutes left in the match, CLAS Gold kept its footing with a 100-plus point lead – answering everything from famous painters and prime numbers to psychology concepts and New England history – as a stunned Public Programs looked on. Both teams struggled with word problems just before the match was called with a final score of 280-60, College of Liberal Arts and Sciences Gold.

With College of Public Programs eliminated, another elimination round began – pitting CLAS Gold against Engineering Gold. Engineering snagged some early toss-up questions that garnered them 60 points, but correct answers about art history and chemical reactions gave CLAS some wiggle room. For 10 points each, CLAS Gold fired off correct answers to Trojan War questions, launching not quite a thousand points but a solid 30.

The opposition would not stand for it; Engineering Gold pushed back with correct answers to science questions, which proved to pad their score. With less than two minutes to go, Engineering recalled their knowledge of American space missions to try to balance the score – and found a groove. Their buzzer was on fire as they raced the clock in their quest to catch up, impressing the crowd with their success. The last moments of the match proved tense, as it was unclear who would win. But the victory went to the College of Liberal Arts and Sciences Gold team by a narrow margin of 15 points. The final score was 185-170, CLAS Gold.

While the College of Liberal Arts and Sciences Maroon team hoped it would be the final match of the night, the College of Liberal Arts and Sciences Gold prayed it would not. The two CLAS teams faced each other yet again (you can run, but you can't hide from your self) in their quest for a ticket to the semi-finals; Maroon was one win closer than Gold. First to score with precise retorts to professional tennis questions, Maroon managed to thicken its lead by a hundred.

Salinger's "Franny and Zooey" awakened Gold from its slumber, throwing 40 points their way, but the team's moans were audible when they botched a series of geography questions. Actor Michael Fassbender was the common denominator for a series of bonus questions won by Maroon. Again revealing their musical prowess, CLAS Maroon racked up another 15 points via music theory.

Looking to squash their 50-point deficit, CLAS Gold tried their luck at literary works – and it worked. With a tie score of 170-170, both teams were ready to go at the buzzer. Maroon won the toss-up to go on to win points for geography questions. CLAS Gold fired back to even the score to 210 right as the buzzer sounded.

Requiring a sudden death question that called for pencil and paper, Gold answered first and nailed it, defeating Maroon in what was an excrutiatingly close match.

Now tied with wins, the two teams entered a double elimination match to see who would go home and who would go onto semi-finals glory. In typical fashion, Maroon was no slug when it came to starting things off; they quickly gained a solid lead over Gold to bring the score to 115-35. Questions about the death of Osama bin Laden gave them an extra 40 points. Not to be outdone, Gold brought the heat with correct answers to questions about political figures, ancient history and poets, including Pablo Neruda.

But Maroon kept its edge, as they confidently buzzed in for toss-up after toss-up, successfully recognizing the agricultural movement led by Cesar Chavez. Proving their patriotism, Gold answered questions about the Star-Spangled Banner and Francis Scott Key to once again inch closer to Maroon's score.

A geometry question would ultimately settle this score – one that favored CLAS Maroon, who advanced to the semi-finals, leaving CLAS Gold in their wake. The final score was 265-205.

We've got you covered: Can't make it to the final rounds on the downtown campus?

Colleen Jennings-Roggensack, executive director of ASU Gammage, was the moderator for the second half of the evening.

Health Solutions took an early lead against W. P. Carey in the next match, grabbing the first two toss-ups and a couple of bonus questions about acids. But it didn't take long for W. P. Carey to fight back and the team was soon up 110-40. A pop culture reference to rapper Flo Rida drew laughs from the crowd, as W. P. Carey widened their lead. Health Solutions did not go down without a fight though and proved their anatomy knowledge extends to animals when they correctly answered that a cow's stomach creates rennet. In the end it was not enough, and the W. P. Carey School clinched a second win with a final score of 225-90.

University College had a better start against the School of Sustainability in match four of the second half and were the first to put points on the board. Sustainability proved knowledgeable on many of the questions that followed and held the lead halfway through the match. They maintained their edge, answering a couple of questions on Ireland. Finally a pop culture bonus round about the current hit "Call Me Maybe" sealed their win, 190-50, to the amusement of the crowd. University College was eliminated from the competition.

Sustainability showed they were determined to stay in the game and took the first handful of toss-ups along with a majority of bonus questions giving them a strong lead against Health Solutions early in match five. They continued to dominate, proving their wealth of knowledge by answering questions ranging from algebra to literature. Health Promotions cheered after almost getting their first set of points by answering a question about Oedipus, but they failed to give the whole answer and Sustainability was able to steal it with the correct response: "Oedipus Rex." By the time the buzzer went off, Health Promotions had failed to put any points on the board and were eliminated in a shutout, 270-0.

Once again quick on the buzzer, W. P. Carey wasted no time taking 80 points after the first two toss-ups and bonus rounds against Sustainability in the final match. Halfway through, W. P. Carey's victory seemed certain as Sustainability still hadn't scored and W. P. Carey had 230 points. They knew who wrote "Paul Revere's Ride" and soared through bonus questions about the opening ceremonies of the 2012 London Olympics. Sustainability finally got on the board after answering a question about Sweden and the band Coldplay. But time was running out, and W. P. Carey emerged the victor – advancing to the semi-finals – with a final score of 340-35.