Arizona State University’s student chapter of Engineers Without Borders (EWB) is a winner of a 2014 Premier Project Award from the national EWB-USA organization.

The chapter is being recognized for its work to design and construct sustainable water infrastructure to develop sustainable water resources in a rural community in Kenya. It is one of only three EWB chapters throughout the United States to be given a Premier Project Award this year. The winners were selected from among hundreds of projects, according to an EWB-USA chapter relations manager. 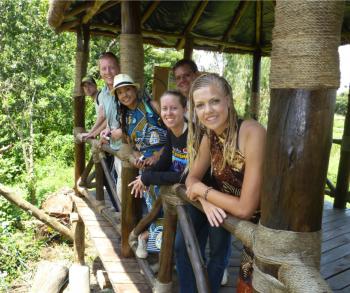 The award recognizes the projects “that deliver high quality, sustainable solutions to help meet the needs of our neighboring communities.” Winners were announced in coordination with National Engineers Week, Feb. 16-22.

In the first three and a half years of the planned five-year effort, ASU students have used their engineering skills to provide the community systems to collect and store potable water, including construction of a rainwater catchment facility and repair of a dam that serves residents of the Bondo-Rarieda community in Kenya.

About 25 students currently are involved in the project, but since it began, as many as 50 students have participated in some way, says senior biomedical engineering student Brittany Duong, president of the EWB ASU chapter. The project team is mentored by Jack Moody, a civil engineer with the Cardno WRG consulting company, and Greg Rodzenko, a civil engineer with the City of Glendale. The chapter’s faculty adviser is Edward Kavazanjian, a professor in the School of Sustainable Engineering and the Built Environment, one of ASU’s Ira A. Fulton Schools of Engineering.

Fifteen students have made one or more of four trips to Kenya during the past three summers. With construction of the rainwater catchment system and repair of the dam, members of the community are now able to store water for use during the region’s extensive dry season.

Along with members of the Bondo-Rarieda community, the ASU team’s partners in the project include some of the faculty and 25 or so engineering students at Jaramogi Oginga Odinga University of Science and Technology in Kenya. Beyond the technological solutions, education and capacity building are key elements of the project. The ASU students have trained local community members in water-system construction and maintenance techniques.

“We want them to understand the technology so they will be able to operate it and repair it in the future,” Duong says.

This year the ASU team plans to help build a hydraulics laboratory at Jaramogi Oginga Odinga University so the engineers and others there can conduct their own local water research in the future. The new water infrastructure serves only several hundred people, “but we hope that we have started something that will spread throughout Kenya,” says Duong.

The project got started when EWB ASU members connected with a Kenyan student pursuing a doctoral degree in education at ASU who informed them about the region’s scarcity of potable water.

Because of the Premier Project Award, the EWB ASU team will be featured on the EWB-USA website and in its annual report, as well as in social media. The project’s success has helped attract $31,000 in grants from corporations and philanthropic organizations, such as the Alcoa Foundation, Bechtel, Boeing and Lockheed Martin.

The EWB ASU chapter is working on other engineering projects, including some in partnership with Native American communities in Arizona. Associate professor Amy Landis and assistant professor Kristen Parrish in the School of Sustainable Engineering and the Built Environment are co-faculty advisers on those projects.

EWB-USA is a nonprofit organization started in 2000. It solicits support from major corporations that select chapter projects to fund. The organization now has more than 13,000 students, faculty and professional members involved in 350 engineering projects in more than 45 developing countries.

Desirée Garcia, assistant professor in the ASU Department of English's film and media studies program, has been awarded a 2014 Career Enhancement Fellowship from the Woodrow Wilson National Fellowship Foundation.

The highly competitive fellowships, funded by the Andrew W. Mellon Foundation and administered by the Wilson Foundation, are given to “increase the presence of minority junior faculty members and other faculty members committed to eradicating racial disparities in core fields in the arts and sciences” (according to a fellowship brochure from the Wilson Foundation). They provide a one-year sabbatical stipend; a research, travel or publication grant; and participation in a conference/retreat. 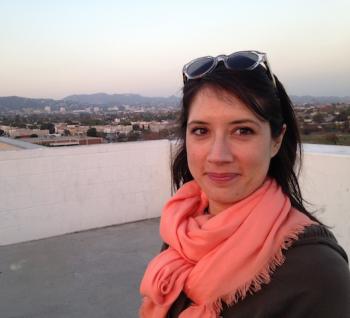 Garcia’s winning project, “Show People: American Identities on the Musical Stage,” explores the physical and metaphorical stage as a site of self-creation. Her work focuses especially on women, immigrant and African-American performers. Garcia says that through fame-making performance, marginalized individuals have become accepted members of society’s culture at-large. “[D]isempowered groups in American society have consistently wielded the stage as a place where the American Dream can be attained and secured.”

The research springs from Garcia’s earlier work on the American musical; her monograph, “The Migration of Musical Film: From Ethnic Margins to American Mainstream,” will be published in August by Rutgers University Press. The book traces the development of the American “folk musical” in film. Not to be confused with the folk movement of the 1960s and 1970s, folk musicals arose from various ethnic traditions in the early 20th century. Garcia argues that they were the precursors to the well-known Hollywood musical, and that their influence can be seen in such recognizable film classics as "The Wizard of Oz” (1939) and “The Sound of Music” (1965).

Formerly a producer for the PBS documentary series American Experience, Garcia earned a doctorate in American studies at Boston University, where she was the recipient of a Ford Foundation Diversity Dissertation Fellowship. She came to ASU in 2011, where she teaches cross-disciplinary courses on global and national cinemas, and race and gender in American film.

The Department of English is an academic unit in the College of Liberal Arts and Sciences.