Four Valley professionals chose X-Scape from among the five proposals submitted by teams composed of students from the ASU School of Art and The Design School and at least one other of the Herberger Institute’s six schools. This year’s winning design will be installed on Neeb Plaza, located between the School of Art and The Design School, to create a multi-level and multi-purpose seating, lounging and gathering spot with trees providing shade and natural plantings, combined with an artificial turf to create an inviting and comfortable place for the campus community.

They pitched their design to the judges as one that would encourage casual use and conversation, as well as serve as an open-air staging area for performances, readings and other events.

For the last three years, teams of students working with faculty advisors have developed proposals to enliven the otherwise underutilized Neeb Plaza, to make it a vital gathering space for the ASU Tempe campus community.

“The quality of the presentations and sophistication of the projects has increased significantly each year,” Jenik said.  "We were particularly pleased that teams this year were comprised of students from every school in the Herberger Institute."

The winning proposal was determined by a combination of a popular vote of ASU students, faculty and staff, and the panel of professional jurors. The jurors this year were architect Will Bruder; director of the City of Scottsdale Public Art, Valerie Vadala Homer; author, performer and Scottsdale Museum of Contemporary Art Lounge Coordinator Tania Katan, and Paul Scott of the structural engineering firm Caruso Turley Scott.

The jurors said that they were impressed with the high quality of all of the proposals, but voted in the end for “X-Scape” citing its integration with the site and its ability to be adapted to create temporary “pocket parks” in a wide variety of locations throughout the Phoenix area.

“[X-Scape] has the potential of making a major contribution to the Valley's exciting conversation about temporary uses of empty lots,” said Bruder, adding that it will be “a testing ground for the rethinking of how sustainable reuse of the urban landscape can enrich our communities.”

The team X-Factor – Lauren Lochry, Jeff Gillway and Ernesto Lopez from The Design School, Mary Klacza and Leon Nash from the School of Art, and Collette Mabingani from the School of Music – were the winners of the popular vote and were named runners-up for their proposal, “Emitting Frequencies,” a modular performance pavilion.

“X-Scape” will be installed at the start of the fall semester, replacing last year’s winner titled “Peritonium.”   “It has been exciting to see the space come to life with such a structurally beautiful piece. As a result of the team’s vision and hard work, X-square has become an iconic and well-utilized part of the campus this academic year,”
said Jenik.  Students Ryan Martindale, Erica MacKenzie, Ben Partridge, Anna Christy, Courtney Larsen, Josh Gallagher, Kyle Fiano, and Erin Giordano created last year’s X-Square winner that will be disassembled in mid-May and moved to a new location in Fountain Hills.

For more information about the annual competition visit herbergerinstitute.asu.edu/institute/initiatives/xsquare.php.

This is the first of five State Farm Territorial Cup Series Games between the two teams.

The 19th-ranked Arizona State baseball team is hosting No. 16 Arizona at 6:30 p.m., April 17, Packard Stadium for the first baseball State Farm Territorial Cup Series game of the season. It will also be the first of two "Cory Hahn Bucket Nights" that will be held this year at Packard Stadium where we will have a volunteer for every section passing buckets for donations to Cory's fund. The next one will also take place against Arizona on May 16 at Packard Stadium. Donations will go to the Cory Hahn Fund.

Can't Make It?:
You can listen to the game on The Fan AM 1060 as Tim Healey and Seth Dhaenens have the call for the Sun Devils Sports Network. The broadcast will begin at 6:15 p.m. A live webcast of the game will be available online at FoxSportsArizona.com, get live, up-to-the-minute stats online with gametracker, or join our live chat with a member of the ASU Media Relations staff. 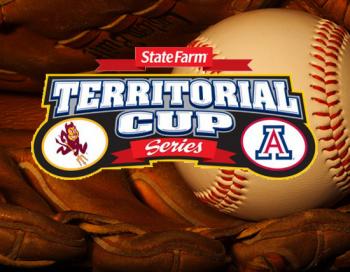 State Farm Territorial Cup Series:
All five regular-season baseball games between Arizona and Arizona State will count toward the season series tally in the State Farm Territorial Cup Series. The schools compete in 17 common varsity sports, and the school that accumulates the most points over the course of the school year will win the competition.

Cory Hahn "Pass The Bucket Night":
In conjunction with the Cory Hahn Foundation, is hosting a "Pass The Bucket Night" to help raise money and awareness for Cory and his family. Volunteers, wearing gray ASU jerseys, will be stationed at every section and will be passing around the donation buckets from the third inning until the end of the game.

Stadium:
Packard Stadium - Tempe, Ariz.
Getting To The Game:
Tickets to games at ASU's Packard Stadium start at $8 for adults and $6 for youth (ages 16 and under) and seniors. ASU students earn free admission with their SunCard. The Sun Devils' home stadium is located on the Northeast side of campus, along Packard Dr., just east of Sun Devil Stadium and south of Loop 202.

USC Recap:
ASU has won 11 straight home baseball games against the Trojans dating back to 2006 and for the first time since 1985, the ASU football, men's basketball and baseball teams swept the games versus USC in Tempe.

The Sun Devils swept USC in a three-game series at Packard Stadium, outscoring the Trojans 17-2. ASU, wearing their new black and copper hats and jerseys in the Blackout Game, won 5-1 on Friday night behind the arm of Brady Rodgers. Trevor Williams picked up his seventh win of the season in a 4-0 win on Saturday and ASU hit three home runs in a 8-1 victory on Sunday.

Welcome To Mr. Rodgers' Neighborhood:
Right-hander Brady Rodgers has three complete games this season and went the distance in back-to-back games after allowing one earned run in a win over Cal on March 23 and giving up one earned run in a loss to Oregon on March 31. He began the season with 23 consecutive scoreless innings, which is sixth-best in the school history, and has allowed just nine earned runs and seven walks in a conference-best 72 innings this season. He also went nine innings in an extra-innings contest against UCLA.

More On Brady:
Rodgers is tied for sixth in the nation with a 1.13 ERA, but is the only one in the top seven to have more than 65 innings pitched.

Leading The Pac (On The Mound):
On the pitching side, right-hander Brady Rodgers and Trevor Williams own the top-two spots in ERA at 1.12 and 1.41, respectively. Rodgers leads the conference in innings pitched at 72, while Williams is tied for first in runners picked off at four and wins with seven. Jake Barrett is tied for first in games finished at 18 and tied for fourth in saves with six.

Doing The Extra (Base) Work:
Across the board, the Sun Devils can claim the top spot in the Pac-12 in extra-base hits. Abe Ruiz leads the conference in doubles (14) and home runs (9), and Joey DeMichele is first in triples (5). Ruiz and DeMichele are tied for second in total bases (81), and are second and fourth, respectively, in slugging percentage at .653 and .609.

A Deep Staff:
Arizona State has used 15 pitchers through 36 games of the season. The Devils only used 11 all season last year. Right-hander Mark Lambson, who appeared in 10 games and threw 23.2 innings in 2011, has not made an appearance yet this season. Eight pitchers have also made at least one start this season and 10 have registered either a win or a loss.

Up Next:
Arizona State travels to Palo Alto, Calif., to take on No. 8 Stanford in a three-game Pac-12 road series. First pitch on Friday is set for 5:30 p.m. (PT), while both Saturday and Sunday's contests are slated for a 1 p.m. start time. The Sun Devils Sports Network will broadcast all three games live on The Fan AM 1060, with Tim Healey and Seth Dhaenenson the call.