For its 11th year, ASU Gammage’s program "Journey Home, an Arts Experience" for incarcerated women, will work with inmates, ages 18 to 50, at Estrella Jail to enable these women to discover a personal sense of constructive identity through movement, visual arts, creative writing and storytelling.

The program will culminate in a performance open to the public on March 30. 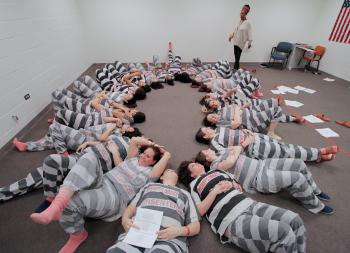 For six weeks leading up to the performance, inmates meet weekly for training. The intent is to help them build personal skills and self-esteem, and demonstrate alternative methods to avert destructive behavior through the arts – so that the women, then, begin to see themselves as productive, creative people.

This year’s theme is "Sacred Woman: Who you are is who you choose to be." These choices are made based on environment, experiences and exposure. Sacred Woman takes the women on a journey into their soul choices and seeks to shift their sense of self into one that serves their highest good.

Colleen Jennings-Roggensack, ASU Gammage executive director, says Journey Home "allows these women to develop creative tools that can help them make positive choices, and encourages them to break the negative patterns that lead to incarceration. We are the only performing arts venue in the country doing work like this within the prison system; it goes back to our mission of connecting communities."

The program originated from dancer/choreographer Pat Graney’s national program “Keeping the Faith” prison project. For the past 11 years, ASU Gammage has sustained the event locally through Life Paradigms, Inc. The program has allowed the inmates to develop tools to make positive choices and encourages them to break the negative patterns in their lives.

The media is invited to witness the women’s final performance as well as observe some of the six-week workshops. Please RSVP to Dana McGuinness to guarantee a spot no later than March 9 at 480.965.1884 or dana.mcguinness@asu.edu

By popular demand, Disney's "The Lion King" will return to Tempe for the first time since 2009.

By popular demand, Disney’s "The Lion King" will return to Tempe for the first time since 2009, where the production played a triumphant six-week run at ASU Gammage. This exclusive return engagement will begin Oct. 22 and runs through Nov. 17 and will highlight the 2013-2014 Broadway Across America – Arizona series at ASU Gammage. Group tickets of 15 or more went on sale Feb. 20 in person at the ASU Gammage Box office or by calling 480-965-6678.

Subscribers will have the first opportunity to purchase single tickets with their 2013-2014 subscription and general single tickets go on sale June 3. With eight productions currently playing around the world, it will make its South American and Portuguese language debut when it begins performances in Sao Paolo, Brazil in February 2013.  With that production, "The Lion King's" 21 productions will have played in 98 cities in 16 countries on every continent except Antarctica.

As it enters its 16th year, "The Lion King" remains ascendant, and one of the most popular stage musicals in the world. Since its Broadway premiere on Nov. 13, 1997, 20 global productions have been seen by more than 66 million people and, cumulatively, run a staggering 96 years.  Produced by Disney Theatrical Productions (under the direction of Thomas Schumacher), "The Lion King" is only the second show in history to generate five productions worldwide running 10 or more years. Translated into seven different languages (Japanese, German, Korean, French, Dutch, Mandarin, Spanish and Portuguese), "The Lion King" can currently be seen on Broadway and on tour across North America, in Tokyo and on tour in Japan, in London’s West End and on tour throughout the UK, and in Hamburg and Madrid.

The show’s director, costume designer and mask co-designer Julie Taymor continues to play an integral part in the show’s ongoing success.  The first woman to win a Tony Award for Direction of a Musical, Taymor has in recent years supervised new productions of the show in Las Vegas, Madrid and the UK tour and just completed casting the Brazilian production in Sao Paolo.

The Broadway score features Elton John and Tim Rice’s music from "The Lion King" animated film along with three new songs by John and Rice; additional musical material by South African Lebo M, Mark Mancina, Jay Rifkin, Julie Taymor and Hans Zimmer; and music from "Rhythm of the Pride Lands," an album inspired by the original music in the film, written by Lebo M, Mark Mancina and Hans Zimmer.  The resulting sound of "The Lion King" is a fusion of Western popular music and the distinctive sounds and rhythms of Africa, ranging from the Academy Award-winning song “Can You Feel the Love Tonight” to the haunting ballad “Shadowland.”