International relations expert to lecture on the end of American exceptionalism

American power around the world is facing new challenges, and our government is often paralyzed by gridlock. How did we get here, and how do we fix it?

Andrew Bacevich, a former Army officer, best-selling author and professor of international relations and history at Boston University, will address these questions in his free public lecture, “The Limits of Power: The End of American Exceptionalism.” 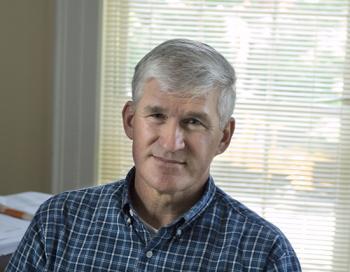 The lecture, part of the Center for the Study of Religion and Conflict’s Alternative Visions Lecture Series, will take place at 1:30 p.m., Oct. 23, in Old Main’s Carson Ballroom.

Time has called him, “one of the most provocative – as in thought-provoking – national security writers out there today.” Bacevich’s best-selling books have offered critical insights into America’s military industrial complex, decades of foreign policy and the way ordinary citizens relate to the military.

“Professor Bacevich brings a unique combination of experience and knowledge to his analysis of American foreign policy,” says Linell Cady, director of the Center for the Study of Religion and Conflict and professor of religious studies. “His reflections on American exceptionalism couldn't be more relevant to current debates over the role of the United States in international affairs.”

Bacevich sees the political, military and economic issues that face America as deeply interconnected. He suggests we can address these issues by respecting power and its limits, suppressing claims of American exceptionalism and by being skeptical of easy solutions, especially those involving force.

In this lecture, Bacevich will discuss how various presidential administrations have led America on an increasingly unsustainable path, as well as the long term effects of the United States involvement in recent conflicts around the globe.

“The Iraq War didn’t end when the last U.S. troops departed in 2011. It just continued without American participation.” Says Bacevich. “Now, the U.S. has resumed its role in this ongoing struggle. The question is why we have learned so little from our experience thus far.”

A graduate of the U.S. Military Academy, Bacevich received his doctorate in American diplomatic history from Princeton University. With the U.S. Army, he served during the Vietnam War, held posts in Germany and the Persian Gulf, and retired with the rank of Colonel. Since retiring, Bacevich has taught at both West Point and Johns Hopkins, and he was a Berlin Prize Fellow at the American Academy in Berlin. He has also held fellowships at the Paul H. Nitze School of Advanced International Studies, the John F. Kennedy School of Government, and the Council on Foreign Relations.

His books include "Washington Rules: America’s Path to Permanent War" and "The Limits of Power: The End of American Exceptionalism." He is a regular contributor to The New York Times, Washington Post, Wall Street Journal and Financial Times, among many other news outlets. His latest book, "Breach of Trust: How Americans Failed Their Soldiers and Their Country," is a critique of the gulf between America’s soldiers and the society that sends them off to war.

The lecture is part of the center’s “Alternative Visions” lecture series. The series brings nationally and internationally recognized experts such as Peter Bergen, Elaine Pagels and Reza Aslan to campus to address the sources of conflict and strategies for resolution.

The series is supported by a grant from philanthropist John Whiteman. For more information or to register for the lecture, see the event page.

With election season upon us – not only for the state and federal government, but for tribal nations such as the Navajo Nation – ASU Libraries are highlighting campaign material from their donated political manuscript collections.

The Chicano/a Research Collection and the Labriola National American Indian Data Center spotlight historic political firsts in their new exhibit, "Political Trailblazers on Campaign." The exhibit will be on display through fall 2014 and can be seen at the Hayden Library Rotunda, the Labriola Center (Level 2), and the Luhrs Gallery (level 4). 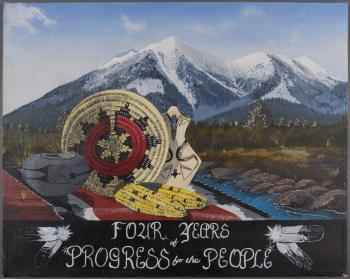 "Political Trailblazers on Campaign" celebrates the political drive and campaigns of local leaders and politicians. The exhibit also presents a brief history of American Indian voting rights in Arizona and highlights the first female Chief of the Cherokee Nation, Wilma Mankiller.

The exhibit spotlights “trailblazers” such as:

Senator Manuel “Lito” Peña, a veteran and civil rights advocate, served three terms in the House of Representatives and 12 terms in the State Senate District 22. When his brother Rudolph "Danny" Peña was elected to office in 1972, they became the first brothers to simultaneously hold office at the state level.

Roberto Reveles, a passionate advocate for worker and immigrant rights, was a congressional staffer for five congressmen between 1956 and 1980. In 1972, he ran a strong but unsuccessful campaign for a seat in the U.S. Congress District 4.

Senator Alfredo Gutierrez, former legislator, Vietnam veteran and community activist, has played a prominent role in Chicano/a and Arizona history. Between 1972 and 1986, he served in the State Senate, where he was both the majority and minority leader. At 27 years old, he was the youngest person ever elected and rapidly became one of its most distinguished leaders.

Senator Joe Eddie and Rose Marie Lopez, community activists and leaders, were the heart and soul of the Chicano/a Movement in Arizona. Senator Lopez began his political career in 1972 when he was elected to Maricopa County Board of Supervisors. Then, in 1991 and 1996, he served on the House of Representatives and State Senate until 2013. In 1999, Rosie ran a passionate but unsuccessful campaign for Phoenix City Council in District 7.

Congressman Ed Pastor became Arizona's first Mexican American to be elected into U.S Congress in 1991. After 23 years of serving the people of Arizona, Congressman Pastor will be retiring from office in November 2014.

Senator Virginia Leticia Yrun, an advocate for health care reform and women’s rights, became Arizona’s first Mexican American woman to run for U.S. Congress in 1991. She ran a strong but unsuccessful primary campaign against fellow Democrat Congressman Ed Pastor. In 2001, she was appointed by Pima County Board of Supervisors to fill the vacant seat of Arizona Senator Andy Nichols in the State Senate.

Peterson Zah served as chairman of the Navajo Tribal Council from 1983 to 1987, and in 1990 he became the first elected president in the new Navajo Nation.

Wenona Benally Baldenegro ran in the 2012 election for the U.S. House to represent Arizona's 1st District. She's a member of the Navajo Nation and her campaign was historic, as her election would have made her the first Native American woman to serve in Congress.

The ASU Libraries is hosting an opening reception from 5:30 to 7 p.m., Oct. 9, in the Luhrs Reading Room, Hayden Library (level 4). The event is free of charge and open to the public. At 6 p.m., opening remarks will be made by Daniel R. Ortega, Jr., of the Ortega Law Firm, Inc., and Michelle Hale, of ASU American Indian Studies, an expert in Indigenous governance.