“We are the only species on earth to possess the ability to explore, discover and speculate about its own past.”

Written in a newsletter nearly 30 years ago by Donald Johanson, founding director of ASU’s Institute of Human Origins, this idea sparked Johanson’s lifelong study of anthropology, which he sealed in the history of science in 1974 as the founder of the 3.14 million year-old fossil bones of Australopithecus afarensis, popularly known as “Lucy.”

The 30-year history of the Institute of Human Origins has its foundation in Johanson’s earnest pursuit to understand the evolutionary process by which we became human. The institute’s future continues that mission as the leading research organization in the United States devoted to the science of human origins.

The Institute of Human Origins was founded as a nonprofit in Berkeley, California, in March 1981 as an independent human evolution think tank to implement, according to its mission, a “multidisciplinary strategy to discover and interpret the evidence for human evolution.”

Early in its formation, Johanson and fellow institute scientists knew that only by combining their individual expertise in biology, geology, anthropology and geography could new knowledge be gleaned from the research sites and fossils searching for answers to our origins. The institute moved to Arizona State University in 1996, bringing Johanson, the institute’s current director, William Kimbel, and professor Kaye Reed to faculty positions with the Department of Anthropology. The institute is now a research center in the School of Human Evolution and Social Change in the College of Liberal Arts and Sciences.

To celebrate the institute’s anniversary theme, “Becoming Human: 30 Years of Research and Discovery,” a full year of events has been planned to bring renowned scientists and experts in human origins to the ASU campus for a series of lectures; a fall 2011 exhibition in the Museum of Anthropology; an essay competition – “Letters to Lucy” – for elementary, middle and high school students; and a final symposium and gala in April 2012.

The first two lectures beginning spring semester 2011 are “Primates and Human Origins” with William McGrew from the Leverhulme Centre for Human Evolutionary Studies, University of Cambridge, UK, on Thursday, March 24, and “Climate and Human Evolution” with Peter deMenocal, Department of Earth and Environmental Sciences at Columbia University, on April 29.

The culminating symposium in April 2012 will explore topics on the future of human origins research. Both top international scientists and institute faculty, including Johanson, Kimbel, Reed, and Associate Director Curtis Marean and professors Gary Schwartz, Mark Spencer and Chris Campisano, will participate in the one-day symposium that will close with a gala fundraising dinner with Founding Director Don Johanson as its keynote speaker.

In addition to the on-campus events, a special trip is being organized for January 2012 to travel to Ethiopia, where a small group of adventurers will be led by Professor Johanson to visit sites of interest across the country. While there, the travelers will visit a working field school where institute director Bill Kimbel will be leading a group of ASU undergraduate students for six weeks at a site in Hadar close to where the fossil bones of the “Lucy” skeleton were found in 1974. The Hadar project is the longest running paleoanthropology field program in the Ethiopian rift valley, now spanning more than 38 years.

From the beginning, the institute’s board of directors—individuals with a burning interest in human origins from science, academia, business and other arenas—has been a key component in the institute’s funding and support structure. Their participation and commitment to the institute over the years have been key to the success of its research program and international reputation in the study of human origins. The current board is comprised of twenty members (external to ASU), several of whom have been with the institute since 1981.

From childhood sweetheart to quantum electrodynamics, the life and scientific contributions of the legendary Richard Feynman, a physicist of mythic hero status, are given a new and stimulating perspective in a book by Arizona State University professor Lawrence M. Krauss.


In the new scientific biography, “Quantum Man: Richard Feynman’s Life in Science,” due out March 21, Krauss depicts the Nobel Prize winning Feynman as more than “just” a brain. He paints a picture of Feynman, a sprightly and multifaceted man of varied talents and intellectual pursuits ranging from percussion to Mayan hieroglyphs, by exploring the essence of the man as seen through his scientific contributions. 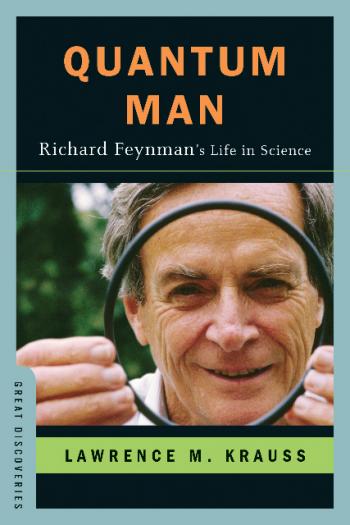 
“There has been a lot of interest in his life. But what I wanted to do is convey why he is an icon for scientists; I wanted to convey his scientific legacy and describe his science as seen through the arc of his life,” said Krauss.


“I wanted to use his fascinating life as a hook to get people to explore the key ideas of 20th and 21st century physics because Feynman’s work encompasses many of the profound ideas we are still grappling with today. Some of his ideas have literally changed our view of the universe and ourselves,” said Krauss, who also is the founding director of the ASU">http://origins.asu.edu/">ASU Origins Project.


Feynman’s work affected the understanding of essential concepts in quantum electrodynamics, the superfluidity of supercooled liquids, and particle physics, as well as the fields of computing, nanotechnology, and the study of gravity. Among his other achievements are work on the Manhattan Project and his service on the panel that investigated the disaster of the space shuttle Challenger.


Krauss wrote in the book that Feynman “in one sense” had been preparing for his work at Los Alamos his whole life. “All his talents were to be exploited during (these) two years: his lightning computational abilities; his mathematical wizardry; his physical intuition; his clear appreciation for experiment; his disrespect for authority; his breadth of physics knowledge, from nuclear physics to the physics of material; and his fascination with computing machines.”


A free and inquisitive spirit, Feynman’s innately calculated disregard for commonly accepted scientific approaches and the ways in which this characteristic led to his scientific legacy are artfully captured in the biography.


Even if an idea had already been proven, Feynman chose to ignore convention and distrusted any idea unless he had worked it out from first principles using his own methods; this unique approach and thoroughness expressed Feynman’s strong emphasis on the journey of doing science in and of itself rather than the end result. “Accomplishment was not his purpose,” wrote Krauss in the epilogue of the book. “It was learning about the world. He felt the fun lay in discovering something, for himself, even if everyone else in the world already knew it.”


This unorthodox technique to solving problems and genuine love for science persisted throughout Feynman’s life until his death in 1988.


“I wanted to show in this story how Feynman changed our view of quantum mechanics. It took a man who is willing to break all the rules to tame a theory that broke all the rules,” said Krauss. “I realized that Feynman’s physics provides, in microcosm, a perspective on the key developments in physics over the second half of the 20th century, and many of the puzzles he left unresolved remain with us today.”


The biography works to not simply track the evolution of different scientific theories and Feynman’s work on them, but to also illustrate how his work, relationships and carefree persona are all intertwined.


Krauss cited letters between Feynman and Arline Greenbaum, his childhood sweetheart, to illustrate the power of their relationship on his work. “Her spirit provided her husband with the vital encouragement he needed to keep going, to find new roads, to break traditions, scientific and otherwise,” said Krauss.


From the early evidence of Feynman’s extraordinary ability to concentrate all of his energy on a single problem to the strength that domestic stability provided him to focus on his work, Krauss merges science and biography in such a way that “presents a whole new paradigm for scientific biography.”


Krauss is the author of seven other books, including “Hiding in the Mirror: The Mysterious Allure of Extra Dimensions, from Plato to String Theory and Beyond,” “The Physics of Star Trek,” and “Quintessence: The Mystery of the Missing Mass.” His ninth book, “A Universe from Nothing,” is scheduled to appear in January 2012.


What others are saying about “Quantum Man”


“‘Quantum Man’ is a masterpiece.” – Walter Isaacson, author of “Einstein: His Life and Universe.”


“Richard Feynman was one of those larger-than-life characters that the popular imagination associates with artists and writers rather than ‘coldly rational’ scientist. Such a charismatic figure deserves a charismatic, knowledgeable, and literate physicist as his warts-and-all-biographer. Lawrence Krauss fits the bill admirably.” – Richard Dawkins, author of “The God Delusion” and “The Greatest Show on Earth.”


“Krauss’s account is both entertaining and masterly. A great read.” – Brian Greene, author of “The Hidden Reality” and “The Elegant Universe.”


“A lively and engrossing biography of a lively and engrossing man. Krauss recounts the life and ideas of one of the century’s greatest scientists with a deep understanding of both the physics and the man, presented with great lucidity and charm.” – Steven Pinker, Harvard, author of “How the Mind Works” and “The Stuff of Thought.”


“Krauss excels in his ability, like Feynman himself, to make complicated physics comprehensible. ... This book is highly recommended for readers who want to get to know one of the preeminent scientists of the 20th century.” – Publisher’s">http://www.publishersweekly.com/978-0-393-06471-1">Publisher’s Weekly.


“Krauss shares with his subject that rare affinity for making science appealing to all manner of audiences.” – Raya Kuzyk, Library">http://www.libraryjournal.com/lj/home/888841-264/editors_spring_picks.ht... Journal.