Watching Alexandra Ncube onstage today, starring in the smash hit “The Book of Mormon,” you would never know she suffered from stage fright.

But the Tempe native, who will be part of the touring performance of "Mormon" coming to ASU Gammage on Oct. 20,  says her fear was so severe in her early years of performance that she would try to “just get through” by pretending the audience wasn’t there. 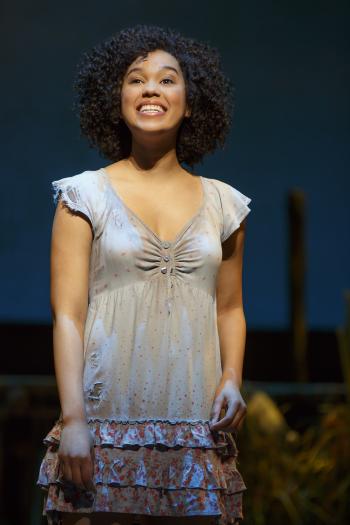 Alexandra Ncube, who returns to ASU Gammage in "The Book of Mormon" this fall, graduated from the Herberger Institute's School of Film, Dance and Theatre in 2012. Photo by: Joan Marcus Download Full Image

Ncube credits ASU's Herberger Institute for Design and the Arts, from which she received a bachelor’s in theater in 2012, with helping her learn to think of the audience as “another character in the scene, that needs to be noticed.”

She says it was “Big Love,” a show presented in the School of Film, Dance and Theatre her junior year at ASU, that “solidified” her love of the program.

“The program was far beyond the curriculum for me,” Ncube says. “It was the relationships with my colleagues and professors, the frustration, the breakthroughs.”

One of the most important things she learned, Ncube says, is that failure is “a gift.”

“I highly respect my professors for creating an environment for me to fail safely and encourage growth in my performance with their direction,” Ncube says. “Failure is the birthplace of new ideas, creation, success.”

This fall sees the launch of another season at Herberger Institute, with more opportunities for rising stars — the future Alexandra Ncubes of the world — to both hone their craft in front of an audience and learn from established stars of the performing arts.

“The Herberger Institute season creates the space for a profound and enriching exchange among students, faculty and the wider community,” says Steven J. Tepper, dean of the institute. “The season is the culmination of our unique laboratory environment and represents hours and hours of experimentation, revision and creativity. The audience gets to experience the final product and feel the immediacy, passion and excellence that have been forged by the collaboration of brilliant students, renowned faculty and visiting artists."

The season showcases students’ talents in vehicles that run the gamut from Stephen Sondheim’s dark, groundbreaking "Company," presented by ASU’s Lyric Opera Theatre, to “Lasso of Truth,” a recent play by Carson Kreitzer that she describes as “a sexy gender power kaleidoscope.”

The School of Music’s esteemed Visiting String Quartet Series brings the Brentano String Quartet to campus for three concerts in Katzin Hall, as well as workshops and master classes; in addition, the Sonoran Chamber Music series will offer four concerts in Katzin Hall, featuring such stars of the chamber-music world as pianist Gil Kalish and violinist Martin Beaver. The school will also present the world premiere of “Guadalupe,” an opera composed by School of Music professor and Arizona Governor’s Arts Award winner James DeMars.

Northlight, ASU’s photography gallery, has moved from Tempe to join the Step Gallery at ASU’s Grant Street Studios in downtown Phoenix. The first show in the new location, “Nascent Site: Sight,” features works from ASU photo alumni celebrating the more than 40 years that the Northlight Gallery has been offering distinctive exhibitions.

The Design School offers a series of talks by luminaries in the design world, which are free and open to the public, as well as exhibitions showcasing the work of the school’s students in architecture, industrial design, interior design, landscape architecture, urban design, visual communication design and environmental science. And the Digital Culture Showcase, a twice-yearly event in the School of Arts, Media + Engineering, highlights the innovative projects that result when students work outside the conventional boundaries that separate art and science.

Visit season.asu.edu for a full listing of season events, and create your own season from the hundreds of events on offer. Patrons who buy tickets to three or more performing arts events before Oct. 1 save 25 percent on the total price.

ASU research team digs up the dirt on microscopic biodiversity

A team of researchers from Arizona State University and Lawrence Berkeley National Lab has discovered that thousands of bacteria living in soil are connected by a complex metabolic relationship.

ASU research team digs up the dirt on microscopic biodiversity

A team of researchers from Arizona State University and Lawrence Berkeley National Lab has discovered that thousands of bacteria living in soil are connected by a complex metabolic relationship. Thanks to new analytical technology and the help of undergraduate students, the team dug deeper into compounds created by the microbial life living in the Earth’s crust.

Although scientists have known about the incredible biodiversity in soil for decades, there was no clear cause for the biodiversity or its role in ecology. According to Ferran Garcia-Pichel, ASU School of Life Sciences professor, understanding that role could be critical to maintaining ecological stability. 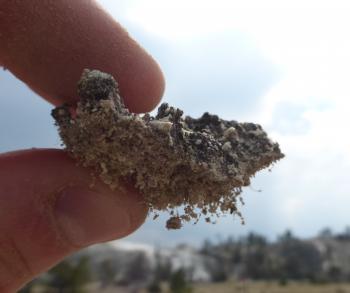 Scientists have long known that there are thousands of bacteria species in soil samples this size, but they did not begin to understand their roles until recently. An ASU research team has discovered that the bacteria produce hundreds of metabolic compounds, linking the species together and providing clues for their function in the environment. Photo by: Sergio Velasco Ayuso Download Full Image

“One of ecology’s major tenets is diversity begets stability, but scientists don’t know if that saying holds true with microbiology,” Garcia-Pichel said. “If we don’t understand what the role is, how can we predict what’s going to happen with global change or pollution? Do we have to worry about it?”

Modern advances in the field of exometabolomics — the study of how cells change their environments — allowed the research team to map the connections between the hundreds of metabolic compounds created by seven bacterial species. The samples used for this study represent only a small portion of the thousands of bacterial species living in soil.

A paper describing the discovery appears Tuesday in the journal Nature Communications.

Garcia-Pichel said that analyzing the food web created by these metabolic compounds could provide the answers environmental microbiologists have been seeking for years. He added, though, that the next step also involves seeing what happens when that food-web is manipulated.

“What happens if you push these relationships in certain directions, like raising the temperature to simulate global warming,” Garcia-Pichel said. “Do some of them break? How much does it take for the whole system to collapse?”

Once they answer those questions, scientists may understand how microbial biodiversity helps the environment and also how to protect it from serious environmental changes.

School of Life Sciences professor Hinsby Cadillo-Quiroz, another faculty member involved in the project, said the research couldn’t have been done without the help of ASU students.

“Microbial diversity and interactions are vast, and the number of interested undergraduates is vast also,” Cadillo-Quiroz said. “So pairing both can make a big difference on what is achieved by a project and on the education of the achievers. The students were truly a cornerstone to this research.”

Through the “Microbial Education and Teaching Out-Reach at ASU” program, undergraduates isolated more than 700 microbes in soil samples from the American Southwest. This collection helped form the basis of the project’s most recent paper and was even the subject of its own publication in 2014. Students also conducted a number of experiments that contributed to the most recent article under the supervision of ASU faculty and post-doctoral researchers with the Lawrence Berkeley National Lab.

According to Cadillo-Quiroz, also a researcher with the ASU Biodesign Institute, the students claim to have learned more during one semester of research than in most of their classes — and not just in terms of microbiology. Students also learned how to work in or lead a research team of diverse peers.

“It is critical to involve undergraduates in research,” Cadillo-Quiroz said. “Not just because it gives the right perspective to those wishing to have a graduate-studies career, but because involving undergraduates enriches the life of the project and the lives of the students regardless of the professional path they may choose.”