Arizona State University's School of Historical, Philosophical and Religious Studies has hired Jonathan Barth as an assistant professor of history of capitalism and political economy.

Barth has been a postdoctoral fellow in history affiliated with the Center for Political Thought and Leadership since August 2014. His manuscript, “Money and Empire in Early America: How Currency Shaped the Seventeenth Century,” explores the relationship between England and its colonies through a currency lens, looking at money as the principal factor in the crisis that led to our nation’s independence. 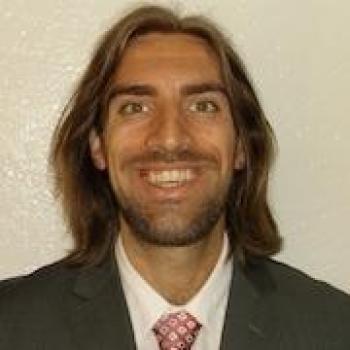 “Money was not simply a medium of commercial exchange, it was a medium of imperial exchange, and trade and empire cannot be comprehensively understood apart from it,” explains Barth. “My second book will examine the rise of colonial paper money in the eighteenth century.” He earned his doctorate at George Mason University.

Matt Garcia, director of the school, states, “Jon Barth builds on current strengths in our history program. He will be joining faculty who have initiated important research and classes on the topics of money, business and capitalism. His emphasis on early America completes our curricular and research endeavors.”

“Jon’s research and teaching interests fit perfectly into the curriculum we have developed in our undergraduate program focused on political thought,” says Donald Critchlow, director of the center. “This is an exciting appointment for us.”

Barth will join the School of Historical, Philosophical and Religious Studies faculty in the fall of 2015.

In 1995, NASA’s Hubble Space Telescope released an iconic image that changed people’s perception of space. Appearing in movies, TV shows and on items from T-shirts to a postage stamp, the photo of the so-called “Pillars of Creation” offered a glimpse at what the origins of our own solar system’s sun might have looked like.

The awe-inspiring photo revealed never-before-seen details of three staggering columns of cold gas bathed in the scorching ultraviolet light from a cluster of young, massive stars in a small region of the Eagle Nebula, or M16. 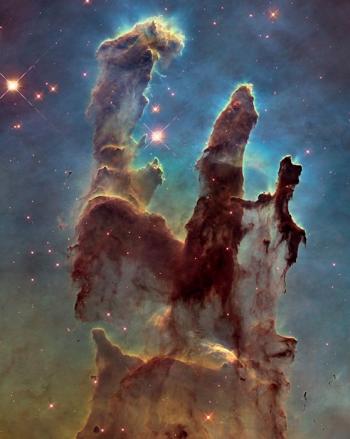 Paul Scowen, associate research professor in the School of Earth and Space Exploration at ASU, and former ASU astronomer Jeff Hester conducted the original observation of the nebula.

In celebration of its upcoming 25th anniversary in April, Hubble has revisited the famous pillars, photographing them in both visible and near-infrared light, creating an image far more detailed than the previous one. The high-definition version of the iconic image was possible thanks to upgrades made to the Hubble Space Telescope over the past 25 years.

“It allows us to demonstrate how far Hubble has come in 25 years of observation,” Scowen said during a news conference at the 225th meeting of the American Astronomical Society.

Along with releasing the sharper new photo, the Hubble team revealed an image of the Eagle Nebula in the infrared wavelength, which cuts through the dust and gas, transforming the pillars into eerie, wispy silhouettes seen against a background of myriad stars.

The new image of the pillars illuminates the constantly shifting face of the universe. In addition to showcasing a region giving birth to new stars, the pillars are also being destroyed by the very star light they are bathed in.

“I’m impressed by how transitory these structures are,” said Scowen. “They are actively being ablated away before our very eyes. The ghostly bluish haze around the dense edges of the pillars is material getting heated up and evaporating away into space. We have caught these pillars at a very unique and short-lived moment in their evolution.”

The infrared image reveals that the pillars still exist after two decades but also show changes that have taken place in the nebula over the past two decades.

“These pillars represent a very dynamic, active process,” Scowen said. “The gas is not being passively heated up and gently wafting away into space. The gaseous pillars are actually getting ionized, a process by which electrons are stripped off of atoms and heated up by radiation from the massive stars. And then they are being eroded by the stars’ strong winds and barrage of charged particles, which are literally sandblasting away the tops of these pillars.”

Our sun probably formed in a similar turbulent star-forming region. There is evidence that the forming solar system was seasoned with radioactive shrapnel from a nearby supernova. That means that our Sun was formed as part of a cluster that included stars massive enough to produce powerful ionizing radiation, such as is seen in the Eagle Nebula.

“That's the only way the nebula from which the sun was born could have been exposed to a supernova that quickly, in the short period of time that represents, because supernovae only come from massive stars, and those stars only live a few tens of millions of years,” Scowen explained. "What that means is when you look at the environment of the Eagle Nebula or other star-forming regions, you're looking at exactly the kind of nascent environment that our sun formed in.”