Arizona State University professor of English Maureen Daly Goggin has been awarded a 2015-2016 Fulbright U.S. Scholar grant for teaching and research on historical needlework practices in Austria and the Czech Republic.

Goggin, whose specialty is the study of rhetoric and material culture in the Department of English, will spend spring 2016 as a visiting professor in cultural studies at Karl Franzens University of Graz, Austria. From there, she will conduct her main research on the Graz Volkskundemuseum’s (Folklore Museum) collection of needlework samplers. 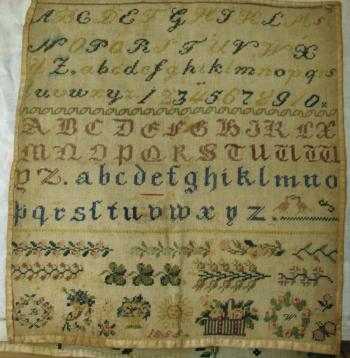 A “sampler” is an embroidered specimen representing a needle worker’s specific skill and style. It often features an alphabet or other decorative text, and sometimes the stitcher’s name and date.

Goggin has published widely on samplers as expressions of alternative literacies.

“The phrases and verses served as a pedagogical tool meant to shape the young stitcher’s virtue as she shaped her stitches,” she explained.

Her Fulbright work is part of a larger project she has tentatively titled “Women and the Material Culture of Writing with Pens of Steel and Inks of Thread.”

Since needlework has historically been undertaken by women, it has functioned – sometimes defiantly – as a gendered mode of communication and activism. Using this approach, Goggin’s work examines so-called “handicraft” work, such as knitting, crocheting and embroidery, in such movements of resistance and representation.

Goggin intends to catalogue and digitize records and images of the Volkskundemuseum’s samplers, so that they are available to other scholars, fiber artists and students. She anticipates the work to culminate in a bilingual English-German book.

“Studying everyday objects made by ordinary people offers a nuanced history of people, places and things that are often overlooked or ignored,” said Goggin. “This project will offer a tantalizing look at some of the women who plied their needle in the nineteenth and early twentieth centuries in Graz.”

Goggin will teach two courses in cultural studies as part of her Fulbright year – one at the graduate level on women and material culture and the other at the undergraduate level on a topic to be determined by the American Studies Department at the University of Graz.

She will also undertake an in-depth analysis of a specific piece of needlework housed in Sts. Cyril and Methodius Cathedral in Prague, Czech Republic. The specimen was stitched by a woman named Františka Albrechtová while a prisoner of war in the Terezin Small Fortress, part of the Theresienstadt concentration camp.

Albrechtová and her husband were executed on Jan. 26, 1943 for reportedly aiding in the 1942 assassination of Nazi leader Reinhard Heydrich. The chairman of the infamous Wannsee Conference, where much of the Holocaust was orchestrated, Heydrich was chillingly called by Adolf Hitler “the man with the iron heart.”

While most needlework that Goggin studies has been produced by women, she has also published on World War II samplers by male POWs. She locates these textiles in the movements to reveal prison artifacts – as part of assembling a complete historical picture of POW experience – and to degender needlework.

With professor of English and director of ASU’s writing programs Shirley Rose, Goggin is co-organizer of an upcoming national conference on this and other material culture topics, the Tenth Biennial Feminisms and Rhetorics Conference: “Women’s Ways of Making.” The conference will be held at ASU this Oct. 28-31.

ASU computer scientist Paulo Shakarian wants to learn why some information goes "viral" on social media – and why some does not.

For years Arizona State University computer scientist Paulo Shakarian has been trying to figure out what makes information go “viral” on social media – as well as what keeps it from happening.

One possible answer occurred to him on a visit with his young son to the Hall of Flame Fire Museum in Phoenix, which is dedicated to the historical preservation of fire fighting equipment used around the world. 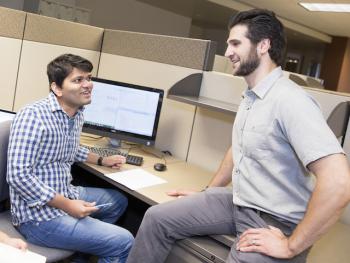 “I was reading about an exhibit on the firefighters who fight rural fires by creating firebreaks, and it gave me an idea. Perhaps information spreading in social media is not able to reach viral proportions because it reaches a ‘firebreak,’” said Shakarian, an assistant professor of computer science and engineering in the School of Computing, Informatics, and Decision Systems Engineering, one of ASU’s Ira A. Fulton Schools of Engineering.

The potential firebreak in this instance would be in the form of a group of people who are not well connected to others in a social network, or are part of a community that is simply not interested in the message. Thus, they inhibit information from spreading.

His interest and initial investigations into the area has led Shakarian to recently be awarded a grant of $354,000 from Young Investigator Research Program of the Air Force Office of Scientific Research. His research proposal, titled “Toward Anti-Inhibitory Influence of Online Social Networks,” was one of only 57 selected from more than 200 proposals for funding from the program.

The Air Force is funding Shakarian's research because of its interest in gaining a better understanding of how information propagates in social media.

The ability to identify social network inhibitors interests researchers, industries and governments in many ways. Marketers, for instance, want to identify the inhibitors so they can take steps to work around them and reinvigorate their campaigns with a new plan. It can also be useful in identifying what inhibits content when, for example, government wants to limit or stop messages being spread by potential terror groups.

Shakarian found that many other scientists noticed different things that act as inhibitors, but the topic was typically discussed only as side notes in research papers. So he began compiling a list of things that might inhibit the spread of information in a social network, and has been working to find a way to navigate around each of these obstacles.

While protecting the privacy of social media users, he and his research team have been looking at anonymous data from Twitter, Instagram and Weibo (a Chinese microblogging site with more than 500 million users). With all of the content created on social media, the percentage that goes viral is very small, offering only a limited amount of examples to work with.

“Very rarely does a post on social media gain traction beyond immediate friends,” Shakarian said. “We want to understand why that is and build algorithms and software to overcome these obstacles.”

Shakarian is a 2002 computer science graduate of the U.S. Military Academy at West Point. He held various military positions with the Army’s First Armored Division and had two deployments to Iraq.

He earned master’s and doctoral degrees in computer science from the University of Maryland, College Park, and then returned to West Point as an assistant professor in 2011, before joining the ASU faculty in 2014.