Creators, makers, and performers invite the public to experience the merger of the practical and the visionary from 6 to 10 p.m., April 6, in an evening including experimental art, mechanisms, music, and dance at the Icehouse in Downtown Phoenix.

Called Apparatus Sculptoris, "the sculptor's studio" after a constellation discovered in the 18th century, the event is a collaborative exhibit organized by ASU students from the schools of Art, Dance and Arts, Media + Engineering in the Herberger Institute for Design and the Arts that celebrates the interdisciplinary potential of the arts. 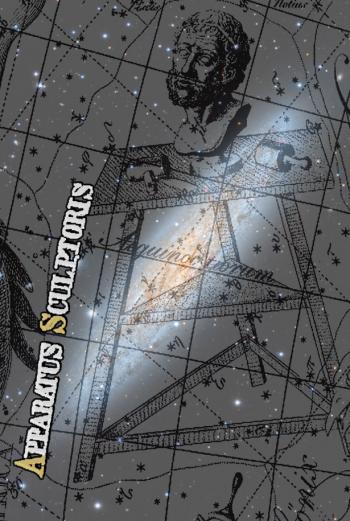 The exhibition represents the intersection of the rational and the radical. Through a variety of strategies, such as illumination, fabrication, installation, and new media, artists create both traditional and adventurous works of art. The  School of Dance presents three original dance performances, rotating throughout the evening. In addition, makers and inventors in Arts, Media + Engineering will display interactive systems and cutting edge technologies.

The Icehouse is a raw, industrial space, making it a perfect venue for art of a highly imaginative nature. This exhibition not only highlights the range of three-dimensional work in the School of Art, but also the diversity of approaches within the Herberger Institute.

The Icehouse is located in the heart of Downtown Phoenix at 429 W. Jackson St. For more information contact Mary Neubauer at mary.neubauer@asu.edu.

ASU MainStage presents 'The House of the Spirits'

ASU MainStage presents 'The House of the Spirits'

The haunting debut novel of "The House of the Spirits" by Isabel Allende comes to the ASU MainStage April 5-15, in an adaptation that explores the struggles of four generations of women from a privileged family as they face a powerful patriarch and 20th century dictatorship in an un-named South American nation.

Rachel Bowditch, assistant professor in the ASU School of Theatre and Film in the Herberger Institute, directs the final production of the MainStage Season. Bowditch says that the play, "The House of the Spirits,"  captures the spirit and the atmosphere of the book, but stands as a new work in its own right. 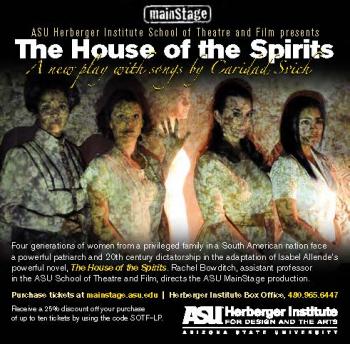 Caridad Svich's adaptation won the 2011 American Theatre Critics Association Francesca Primus Prize and has received numerous other awards in previous productions staged in theatres across the country and internationally.

It includes original music and lyrics by Svich, who writes in the program notes: “I am indebted to Allende for her story, and the inspiration it has offered me in turn to create a new piece for the theatre: a response, a mirror image, a conversation, an ‘after-Allende.’”

“I am struck by Allende’s language,” Bowditch says. “One sentence in the book: ‘Slowly but surely she (Clara) transformed the empty rooms into a labyrinth of secret nooks,’ inspired our set design. The set is a multi-leveled, layered structure that allows the actors to move within a labyrinth of memory and time like a faded sepia photograph.”

To convey the 50-year journey through history that occurs in the play, a multi-media production of documentary-style images convey a Junta and the devastation of an earthquake as well as the poetic, visual world of the characters and supernatural landscapes of Allende’s imagination, Bowditch says.

"The House of the Spirits" is part of a weekend of events devoted to the first Arizona NoPassport conference April 13-15. NoPassport is a gathering of theatre artists and scholars devoted to "dreaming the Americas" together that was founded by Caridad Svich in New York City. For more info, see www.nopassport.org.