Grad's drive to learn sets her on PhD path at 18

At age 18, McBurnett has already completed her undergraduate degree in civil engineering from Arizona State University. She got off to her quick start with time spent in public schools, charter schools and homeschooling until at age 13 she pursued dual high school/college enrollment opportunities at Chandler-Gilbert Community College. 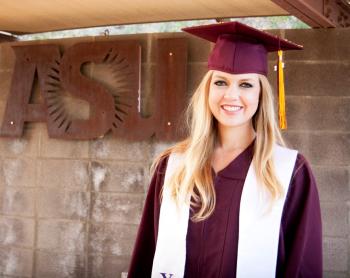 McBurnett tried a lot of different approaches to education as she searched for the best way to overcome her struggles with dyslexia. She found that homeschooling and the one-on-one approach enabled her to create the learning strategies that worked best for her.

“My mother has homeschooled all three of my siblings at one point or another, but it was different for each of us. Mainly she always promoted what we as learners wanted,” says McBurnett. By the time she transferred to ASU at age 16, McBurnett was a math- and science-loving engineer with a lot of motivation.

A straight-A student in community college, McBurnett admits that she experienced “a typical transfer student GPA drop,” but it was only temporary. She says that the resources that ASU provided more than made up for any of the challenges she faced and she quickly regained her top grades.

“When I came in as a transfer student, I felt more driven than ever as a learner and a student,” says McBurnett. She credits a portion of this drive to Fulton Engineering’s Motivated Engineering Transfer Students program – called METS – a program that offers courses, resources and scholarships for transfer students at ASU.

Through METS, McBurnett received a transfer student scholarship and took a course that taught her how to study at a university level.

“It’s a different feel on a big campus, but in the end all of the same opportunities are available if you seek them out, plus many more,” says McBurnett. “Your teachers don’t come to you all the time – you have to go to them. When you do, they have the skills, patience and expertise to give you all the help that you need.”

McBurnett also encourages transfer students to form small study groups in each class and to look into engineering programs and clubs offered at ASU. She is a member of Chi Epsilon, the civil engineering honor society, and the ASU branch of the American Society of Civil Engineers (ASCE).

For McBurnett, her involvement in engineering activities took her all the way to Kenya, something she “never expected to be doing by age 18.” This trip came through her involvement with the ASU chapter of Engineers Without Borders, a national organization that focuses on utilizing engineering skills to solve problems across the globe. McBurnett spent two years on her Engineers Without Borders team working to implement better rain water collection strategies in Bondo, Kenya.

This project included designing a collection system that fit the community’s needs, abilities, and financial restraints, and then submitting a proposal to the larger Engineers Without Borders organization for approval. McBurnett’s team expanded upon current technologies and came up with the idea to store rainwater from school roofs into a large, cost-effective tank in the ground. With approval, McBurnett and several other team members flew to Kenya to build, implement and teach the community about their solution – a solution that can be replicated and easily understood, helping Kenyans solve water infrastructure deficiencies across Bondo and neighboring communities.

In the spring, McBurnett will begin her doctoral program at ASU and hopes to continue serving local and global communities with her knowledge of water resources and engineering. McBurnett is expected to graduate with a doctorate at age 22.

McBurnett is quick to explain that she’s not a "child prodigy" or a genius by any means.

"I’m just one of those students that studies really, really hard and seeks help from teachers, tutors and fellow students at every chance I get,” she says. McBurnett says she’s grateful that ASU allows a student in her situation to not only succeed, but excel.

And, don’t worry, McBurnett wants everyone to know that she had time to make it to a prom.

Three Sun Devils scored in double figures to lead ASU, highlighted by Felix's double-double. He scored a team-high 17 points and anchored the Devils with 13 rebounds. Jahii Carson struggled from the field most of the night, but made crucial shots that tied the game in regulation and won it in overtime. Carson finished with 15 points. Jordan Bachynski added 14 points, many of which kept ASU in the game in the beginning of the second half.

Utah held Arizona State scoreless for over four minutes early in the first half, and used a 9-0 run to lead the Sun Devils, 9-6, at the second official timeout. Bachynski made two of his first three shots to give ASU the early 4-0 lead, but the Sun Devils went cold quickly thereafter, making only one of their next 10 shots from the field.

Felix accounted for 10 straight ASU points and recorded a block during the Devils' 12-2 run, putting the Sun Devils on top, 21-17, at the final official timeout in the first half. At halftime, ASU held onto a 25-24 lead, after the Utes controlled the final minutes of the half. Felix led all scorers with 10 points at the break, while Jason Washburn nearly had a double-double at the break for the Utes, with eight points and nine boards. Neither team shot particularly well from the field, with ASU shooting a 39.3 percent clip and Utah being just below at 35.7 percent.

Despite the continued shooting struggles for Arizona State to begin the second half, Bachynski kept pace with the Utes, scoring all eight ASU points, allowing the Devils to maintain a 33-31 lead at the first official timeout of the half.

The teams traded baskets through the middle of the half until Utah was able to overtake the Sun Devils, 42-41 with 6:22 remaining in the game, as a result of a 6-0 run that kept ASU scoreless for just over three minutes late in the half.

Felix finally broke the run with a free throw, followed by a layup on the next possession, and the Sun Devils regained the lead at the final official timeout, 44-42, with 2:47 remaining in the game.

Utah jumped back on top of the Devils, following a 7-2 run, but Carson drained a crucial three with a minute to play, knotting the game, 49-49. Neither team was able to get anything going offensively on their final possessions, sending the game to overtime.

Bachynski put the first points on the board in overtime, draining a jumper a minute into the period to give ASU a 51-49 lead. Utah countered with a layup to tie the game for the eighth time of the night, but Ruslan Pateev broke the tie with a layup on the Devils' following possession. Sloppy ball handling kept the score stalled into the final minute of overtime, before Jarred DuBois hit a deep three pointer to give the Utes a one-point advantage with 41 seconds remaining. Carson delivered a hard-fought layup on the following play to give the Sun Devils the lead, and Utah the last shot. Arizona State's defense held strong in the final seconds of the game, denying the Utes on four opportunities to deal a devastating blow.

Both squads struggled shooting from the field, with ASU shooting slightly better, recording 37.1 percent on 23-62 from the field. Utah shot 34.5 percent on 20-58 from the field. The Utes outrebounded Arizona State, 44-39, but only had seven second-chance points compared to 15 for the Devils. ASU also had 30 points in the paint, while Utah had 20.

Utah was led by the efforts of Washburn, who had a game-high 19 points and 18 rebounds. Jordan Loveridge also anchored the Utes on the glass, pulling in 11 rebounds to go along with nine points. DuBois added 12 points for Utah.

The Sun Devils will return to action on Sunday, hosting Colorado at 6 p.m MT, to conclude their home stand.