Jeff Holmes, a doctoral student in the Department of English at Arizona State University, plays video games for a living. However, it isn’t the typical World of Warcraft game play that you are thinking about. (Although that is his favorite.) 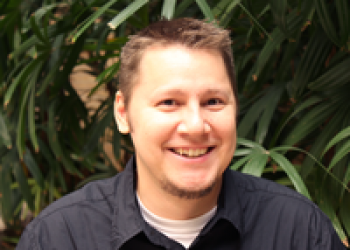 Holmes has spent his more than 10-year academic career analyzing gamification. In fact, part of his research includes analyzing the ins-and-outs of how video games act as learning technologies and the problems they seek to address in the larger context of global society.

The Chicago native proudly describes himself as lifelong gamer. His affinity began out of frustration with the original ET game for the Atari 2600 that was widely criticized for broken features.

“There was a hole that you fell down and could never get out of. As a four-year-old I remember thinking, 'Why can’t I make this work?' It was the first time I was ever being critical of something I was doing. You are supposed to be able to solve a problem in a video game and I remember the tragedy of crying when I couldn’t,” he said.

Instead of letting the depression set in, Holmes played on. During his undergraduate time at ASU, he took a special topics course that discussed the rhetoric of video games. It was the first time that he was actually studying the thing he loved. The experience propelled him to realize that a real discipline and career existed in the world of gaming beyond being a player. It wasn’t just about video games as texts, but rather how people engage with them.

In a symbolic turn of events, he is now teaching a similar version of the course that focuses on the digital rhetoric of games. His thesis examines game-based learning technologies in classroom settings. An example of such is the Mary Lou Fulton Teachers College that uses Quest Atlantis, a game that allows future teachers to act in a classroom setting with lesson plans.

The Center for Games and Impact at ASU is also reaching out to local middle schools to test how games can be incorporated into lessons plans. One class was asked to play Mystery of Tiga River, a game that has students virtually act as scientists trying to uncover the source of pollution in the river. They must conduct research, analyze tests and use critical thinking to determine a solution.

“These games are putting students in a position to experience first-hand the thing that they are studying. You can also use these games to open a discussion about problems in the world like pollution, poverty or labor issues,” said Holmes. “The great thing about games is that you are providing a safe space for students to fail.”

In a normal classroom setting, one mistake can mean a failed test. However, Holmes says that in a virtual world, students can make mistakes as they go through the process and it will only result in starting the game over. They can run through the games until they get it right, something he believes enhances the experience.

“Games get students excited about things they otherwise may not be interested in," he says."Telling a student to read a textbook can be one-dimensional. Asking them to play a game like iCivics is an interesting way of positing learning. They are having fun but also learning about civic participation.”

Through his work, Holmes has found that games are directly teaching students valuable skills, such as critical thinking, problem-solving, data gathering, analysis and decision-making.

“The evidence suggests that these are great gateways into social practices that are valued skills in the 21st century. They are part of a large movement that calls on games for change,” he said.

Not many people understood just how sluggish the recovery from the Great Recession was going to be, but Dean Maki of Barclays correctly predicted one of the toughest times in U.S. economic history.

Not many people understood just how sluggish the recovery from the Great Recession was going to be, but Dean Maki of Barclays correctly predicted one of the toughest times in U.S. economic history. For his incredible forecast, Maki will receive the prestigious Lawrence R. Klein Award for economic-forecasting accuracy in New York on Oct. 29. He will also deliver his highly regarded 2014 forecast.

“I am deeply honored to receive this award on behalf of my team, which includes Michael Gapen, Peter Newland and Cooper Howes,” says Maki, a managing director and chief U.S. economist at Barclays. “The challenge in forecasting during this recovery has been to account for both cyclical and structural trends, and we hope our clients have benefitted from our analysis.” The W. P. Carey School of Business at Arizona State University sponsors and judges the Lawrence R. Klein Award, one of the best-known and longest-standing awards in the economic profession. The annual award, named for Nobel Prize winner Dr. Lawrence R. Klein, goes to the individual or team with the most accurate economic forecast among the Blue Chip Economic Indicators survey participants for a multi-year period. The Blue Chip newsletter, edited by Randell Moore, has been published for almost 40 years and is regarded as the “gold standard” of business forecasts.

Maki earned this year’s award for his 2009 to 2012 predictions, beating out about 50 of the nation’s other top economic forecasters.

“Dean Maki’s overall projections handily beat the consensus for those four years, and his unemployment and inflation figures were particularly accurate, the best of the group,” says research professor Lee McPheters of the W. P. Carey School of Business. “His 2012 forecasts really set him apart. He predicted GDP would rise and unemployment would decrease, and his numeric estimates for those indicators were spot on.”

Maki is responsible for analyzing and forecasting the U.S. economy and monetary and fiscal policy at Barclays. Bloomberg News named him the most accurate forecaster of U.S. gross domestic product (GDP) for 2009 and the most accurate forecaster of consumer price index (CPI) and producer price index (PPI) inflation for 2008 to 2010. Prior to joining Barclays in 2005, Maki was a vice president of economic research at JPMorgan Chase, a U.S. economist for Putnam Investments and a senior economist at the Federal Reserve Board. He holds a doctorate from Stanford University and has had research published in a number of academic journals.

At the awards event, Maki will deliver his 2014 forecast, which includes these predictions:

• Continued growth in the housing market, despite higher mortgage rates.

Top industry professionals and others will be on hand for the invitation-only ceremony, beginning at 6 p.m., Oct. 29, at the University Club in New York.

Some VIPs in attendance will include Randell E. Moore, executive editor of the Blue Chip Economic Indicators; Amy Hillman, dean of the W. P. Carey School of Business; Hannah Klein, daughter of the award namesake; and Francis J. Carey, chairman of the W. P. Carey Foundation, which is sponsoring and hosting the event. Senior executives from W. P. Carey Inc. (NYSE: WPC) will also be in attendance. Larry Kantor, a managing director and head of research at Barclays, will officially present Maki with the award.