How can we tackle resource security, global health, changing climate, economic and political instability, and other emerging challenges that are complex, interconnected and interdependent? Driving positive outcomes to these problems will take collaboration among a diversity of experts, not just within one university or country, but across the globe.

To address this need, Arizona State University has announced a new Global Security Initiative (GSI), to be led by Nadya Bliss, as director of the initiative and professor of practice in the School of Computing, Informatics, and Decision Systems Engineering. 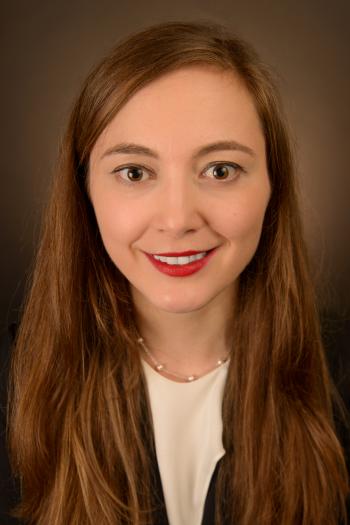 The new initiative will serve as a university-wide interdisciplinary hub for global security research, and is the evolution of ASU’s Security & Defense Systems Initiative.

“GSI was born from the observation that global security is really national security, and that our current challenges require imagination, collaboration, and exploration,” says Sethuraman "Panch" Panchanathan, senior vice president for Knowledge Enterprise Development at ASU. “ASU as a New American University is well positioned to provide these capabilities.”

The initiative was developed with a focus on openness, inclusiveness and connections to the global defense, development and diplomacy communities. It will address the types of challenges characterized by complex interdependencies and conflicting objectives, where there may not be obvious solutions.

The initiative will also have the benefit of working from the foundation the Security & Defense Systems Initiative (SDSI) helped develop, says Kyle Squires, director of the School for Engineering of Matter, Transport and Energy, who served as interim co-director for SDSI.

“SDSI was ASU’s entry as a university initiative into the sphere of security and defense,” Squires says. “That was an important launch for us. It begins to make you identifiable in this space, it begins to coalesce a lot of activities of the faculty, and gets you thinking about what large research initiatives you can tackle.”

The Foresight Initiative, funded by a $20 million National Geospatial-Intelligence Agency cooperative agreement, serves as the foundation for the Global Security Initiative. The Foresight Initiative is a five-year effort to develop research products, tools and processes for decision-making in the context of environmental change and national security dynamics. It will also enable the development and assessment of sustainability and resilience strategies. This challenge requires multidisciplinary cooperation and global partnerships, which GSI will be capable of facilitating.

Cyber security and digital identity is another key challenge cutting across many application domains. Addressing this concern will require the expertise of computer scientists as well as individuals from the business community and the field of law. In addition, it is essential to incorporate the humanist perspective.

“A lot of our lives are spent online and this creates all types of vulnerabilities,” Bliss says. “Ethically, what does it mean to have all of this data out there for everyone to see?”

GSI will allow the interdisciplinary partnerships necessary to see the full picture of a complex challenge.

In dealing with issues of national and global security, there is a significant need for open, inclusive research that draws from the broader scholarly community in addition to closed and classified research. With this new initative, the university is ready to address that need, leveraging the best of both worlds.

Research efforts to address these emerging and enduring challenges will also provide insights on new learning approaches to create and sustain the national security workforce needed to maintain a competitive edge in the global knowledge economy. The Global Security Initiative is representative of ASU’s willingness to be driven by global needs, Bliss says.

“We are addressing these emergent challenges, and as a university and a dynamic environment, it is our calling to do that," she adds.

The initiative will leverage the ASURE (ASU Research Enterprise), an off-campus entity started by the Security & Defense Systems Initiative, to do different types of research that, in the past, university faculty have not pursued.

“That’s very important in the security space, because a lot of the work that is out there for funding will be of a nature where faculty won’t necessarily think of it first,” Panchanathan says.

Can humans, through our pluck, cleverness and indomitable spirit, somehow avoid the fate that has befallen 99 percent of the planet’s species before modern-day Homo sapiens ever arrived on the scene (i.e., extinction)? Or will our actions, the emergence of another species or even smart robots lead to our ultimate downfall? These questions were among the topics explored in a stellar panel dis...

Can humans, through our pluck, cleverness and indomitable spirit, somehow avoid the fate that has befallen 99 percent of the planet’s species before modern-day Homo sapiens ever arrived on the scene (i.e., extinction)? Or will our actions, the emergence of another species or even smart robots lead to our ultimate downfall?

These questions were among the topics explored in a stellar panel discussion moderated by Arizona State University physicist Lawrence Krauss, director of the ASU Origins Project. 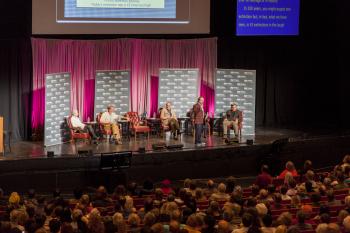 Krauss kicked off the Origins Project Great Debate "Extinctions: Tragedy to Opportunity,” held Feb. 7 in front of a captivated crowd at ASU Gammage, by framing the debate as “a subject of great current interest, because we might already be involved in another” mass extinction event. Now, for the first time in Earth’s history, it is the consequences of human activity that may be propelling us to a new precipice.

According to Krauss, who serves on the Bulletin of the Atomic Scientists, “We’ve pushed the doomsday clock up by two minutes, so we are now at three minutes to midnight, which means we are three minutes away from doomsday. In principle, this is the closest it’s been since the height of the Cold War. So there are a lot of concerns about what humans may be doing to the planet, and to ourselves.”

Panelists for "Extinctions" included poet and naturalist Diane Ackerman; paleoanthropologist and curator emeritus of the American Museum of Natural History Ian Tattersall; ASU President Michael Crow; ASU planetary scientist Lindy Elkins-Tanton; professor and director of MIT's Center for Bits and Atoms Neil Gershenfeld; and Max Planck Institute professor and sequencer of the first Neanderthal genome Svante Pääbo. The audience also got an opportunity to mingle with several of the panelists at a book signing after the event.

Through her research, Elkins-Tanton, an ASU Foundation Professor and director of the School of Earth and Space Exploration, explores the links between present and past from an catastrophic event about 250 million years ago called the end-Permian extinction.

“This was much bigger than the extinction of the dinosaurs," Elkins-Tanton said. "Seventy percent of the terrestrial life became extinct and 90 percent of species in the ocean went extinct. It was almost the end of multicellular life on Earth.”

At the exact same time, a huge volcanic event occurred, creating Siberian flood basalts, where lava flowed freely for a million years, enough to cover the entire U.S. in a crust almost a mile deep.

Humans were also the culprits about 40,000 years ago in some “Pleistocene hanky- panky,” as Tattersall dubbed it. As modern humans migrated out of Africa, they first encountered Neanderthals living in Europe. Remarkably, they began interbreeding with Neanderthals. That intermingling caused their downfall, and yet, because of their interbreeding, still makes us all part Neanderthal.

Paabo’s research team was the first to complete the Neanderthal genome, and has catalogued 30,000 changes that make us uniquely human. And vice versa.

“Neanderthals are not totally extinct,” said Paabo. “They live on a little bit in many of us today, and sometimes, in rather important ways.” One tantalizing tidbit Paabo discovered was a variant of type 2 diabetes found only in Neanderthals that seemed to make them uniquely adapted to surviving during starvation conditions.

President Crow, who recently had some of his DNA sequenced, quipped, “I was 3.2 percent Neanderthal, which was unbelievable. You can pinpoint where your ancient, ancient ancestors came from, and the mating that was so politely referred to earlier was very vigorous in my neck of the woods.”

What was it that gave us the edge to become the top hominid, and most dominant species on the planet? Tattersall believes it had to be the unique way in which our species processed information.

“The burgeoning modern human spirit had been exhibited for some time, expressed in the cave wall art," Tattersall said. "It had its downside as well. We appear to be totally intolerant of competition, and once more, we are capable of enforcing this intolerance. We are the very first hominid species to be able to do that.”

While nature evolves very slowly, the present day human age continues advancing at a breakneck pace, driven by cultural, social and technological innovation. Or, as Ackerman so aptly described: “Creating big hives of megacities that spiral up into the sky, that would be impressive enough. But to generally vex and bother every plant and every animal on every continent and in every ocean; that’s a level of mischief that the planet has never seen before.”

Ackerman pointed out that during the last century, it took us only 60 years to go from traveling by horse-drawn carriage to the moon rocket.

“Our culture has become a very powerful force of biological change," she said. "Throughout our history, our inventions have always reinvented us. All of the inventions of today’s everyday life came about in the last 200 years. We’ve been extending our senses in that time and what it means to be a human being.”

Among today’s innovations, Gershenfeld is leading a global research effort called digital fabrication, which goes beyond the hype of 3-D printing to “turn data into things and things into data. We will turn it into the 'Star Trek' replicator, literally. It’s about a 20-year research roadmap to get there.”

President Crow pointed out that the rapid evolution of social technical systems that we manufacture, live in and co-evolve with all force extinctions.

“Humans are the product of a great extinction," he said. "Earth is life’s incubator, but it’s a slow process. Much faster are our society’s social and economic upheavals.”

This was most famously identified with economist Joseph Schumpeter’s business cycle theory of innovation, called creative destruction: “The pace is accelerating. Three hundred years from the first printed book to a billion books. Twenty-five years from 100,000 Internet sites to more than a billion sites. Now, I am an optimist. Only opportunity lies ahead through social and technical extinction.”

This sea cultural change is also having a profound influence on individual learning and higher education, where Gershenfeld believes one half of today’s universities will go extinct, replaced by digital technologies to make learning more personal, distributed and global.

Crow embraces these technologies in the evolution of ASU: “Finally, through technologies, personalized learning. The birth of a new kind of knowledge creator. The death, or extinction, of the sage on the stage, and the extinction of class-based learning systems.

“It is likely that all of those systems combined will allow us to create, for the first time as we move forward, in an opportunity way, the concept of living and learning and adapting across our entire civilization, in real time for a person’s entire life,” he added.

The evening ended with a question-and-answer session from the audience, hitting upon themes of artificial intelligence, evolving senses, the ethics of attempting de-extinction by biobanking DNA or even, though technically not feasible today, bringing species like Neanderthals back from their dead-end of the gene pool.

The panelists were ultimately optimistic about the human capacity to learn from past extinction and bring societal forces together to better our lives and the planet.

“We may have the wisdom to know how to actually manage our own very, very, very strong footprint on the rest of this planet, to both the planet’s benefit and ours,” said Crow.