A team of 14 scientists led by David Williams of Arizona State University's School of Earth and Space Exploration has completed the first global geologic and tectonic map of the asteroid Vesta. The work reveals that Vesta's history has been dominated by impacts from large meteorites.

The mapping was carried out using images from NASA's Dawn spacecraft, which orbited Vesta between June 2011 and September 2012. The images let scientists create high-resolution geological maps, revealing the variety of Vesta’s surface features in unprecedented detail. 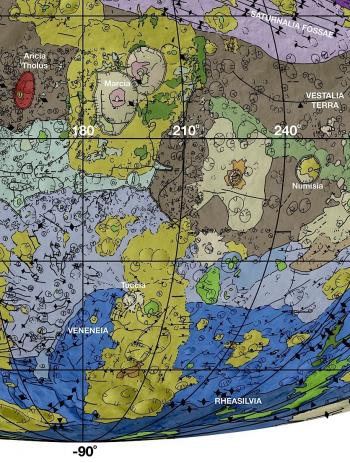 "The geologic mapping campaign at Vesta took about two and a half years to complete," says Williams. "The resulting maps enabled us to construct a geologic time scale of Vesta for comparison to other planets and moons."

The geologic map and timescale appear in a paper by Williams and others in the December 2014 issue of the journal Icarus. The issue also has 10 other papers reporting on Dawn's investigation of Vesta. In addition to Williams, the mapping effort was also led by R. Aileen Yingst of the Planetary Science Institute, Tucson, Arizona, and W. Brent Garry of NASA's Goddard Spaceflight Center, Greenbelt, Maryland.

The mappers found that Vesta’s geologic time scale has been shaped by a sequence of large impact events. The biggest of these were the impacts that blasted the large Veneneia and Rheasilvia craters early in Vesta's history, and the Marcia crater late in its history.

But how long ago did specific events happen? An age in years is quite difficult to determine because the samples scientists have from Vesta – a family of basaltic meteorites called HEDs, for howardite-eucrite-diogenite – do not show a clear formation age (as dated by laboratory methods) that can be linked to specific features on the asteroid.

"So figuring out an actual date in years is a step-by-step-by-step process," explains Williams. "We work with rock samples from the moon, mostly from Apollo missions decades ago. These give actual dates for large lunar impacts." The tricky part, he says, lies in creating a model that links the lunar impact time scale to the rest of the solar system.

In the case of Vesta, scientists have developed two different models to estimate surface ages. One is based on the lunar impact rate, the other on the frequency of asteroid impacts. Thus scientists can use two approaches with crater statistics to date Vesta's surface, but these yield two different age ranges.

"Vesta's last big event, the Marcia impact, has an age that's still uncertain," says Williams. "But our current best estimates suggest an age between roughly 120 and 390 million years." The difference, he explains, comes from which cratering model is used.

The geologic mapping relied on images taken by the framing camera provided by the Max Planck Institute for Solar System Research of the German Max Planck Society and the German Aerospace Center (DLR). This camera takes panchromatic images and seven bands of color filtered images. Overlapping images provide stereoscopic views that create topographic models of the surface to help the geologic interpretation.

The objective of NASA's Dawn mission, launched in 2007, is to characterize the two most massive objects in the main asteroid belt between Mars and Jupiter. Vesta was thought to be the source of a unique set of basaltic meteorites (the HEDs), and Dawn confirmed the Vesta-HED connection. The Dawn spacecraft is currently on its way to the dwarf planet Ceres, the largest object in the asteroid belt. The spacecraft will arrive at Ceres in March 2015. The Dawn mission is managed by the NASA Jet Propulsion Laboratory in Pasadena, California.

Nearly 700 college students from Mexico are visiting the West campus from November to January for an English language immersion workshop.

The goal is to significantly increase the number of Mexican students who are proficient in English so that they may participate in foreign-exchange learning opportunities, as part of a collaborative initiative between the United States and Mexico. 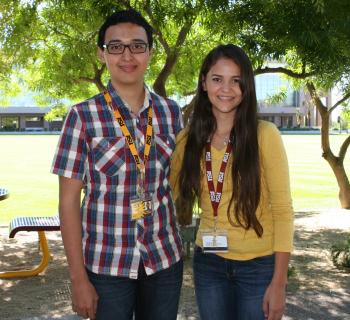 The first cohort of approximately 375 students is currently in residence at ASU’s West campus for an intensive four-week program involving English reading, writing, speaking and listening. Two additional groups, totaling approximately 300 students, will come to campus during December and January.

The students are fully participating in student life, including residing in one of the residence halls on the West campus, eating in Verde Dining Hall, using the library and fitness center, and participating in various campus and university wide co-curricular programs.

“We are very pleased to collaborate with Mexico’s Ministry of Foreign Affairs’ Proyecta 100,000 Program," said Paola Garcia, director of Mexico and Latin America Initiatives in the Office of University Affairs. "This is a historic effort that the government of Mexico is making to support 7,500 students in improving their English proficiency and becoming familiar with the American culture.

“Proyecta 100,000 aims to increase student mobility between the U.S. and Mexico, and through this effort help to achieve the similar goals of the 100,000 Strong in the Americas initiative, led by our presidents,” Garcia said. “We are enthusiastic to contribute to achieving this binational vision by welcoming several hundred Mexican students at ASU.”

The United States and Mexico established the Bilateral Forum on Higher Education Innovation and Research in 2013. The two governments identified limited English proficiency among Mexican students as a main barrier to increasing academic exchanges. As a response, the Mexican government adopted the Proyecta 100,000 program, which supports Mexican students going to the U.S. to learn English.

“We share a border and many common interests with Mexico,” said ASU President Michael Crow. “It’s natural that we seek stronger ties through education, research and innovation so we can help each other prepare for the challenges and the changing nature of the advanced workforce of the 21st century.”

Additional students from Mexico are completing English immersion programs at other U.S. universities as part of Proyecta 100,000, with ASU hosting by far the largest contingent.

“I think most people agree on a policy level that ties between the U.S. and Mexico can and should be stronger, but this program brings these lofty ideals to life,” said Linda Hill, program coordinator for AECP. “Something really beautiful happens when ordinary citizens of a different country, culture and language come together with a mindset simply to learn and grow from one another.

"I believe it’s often true that the real ‘political’ change people are hungry to see happen between the nations of our global community – deeper levels of appreciation, understanding and cooperation – are often realized one person at a time, one exchange at a time. This is the profound value and power of international student exchange.”

Juan Manuel and Diana Elizalde are two of the students who recently arrived in Phoenix. For both it is their first visit to the United States. Manuel is a petroleum engineering major at the Instituto Politécnico Nacional (National Polytechnic Institute, IPN) in Mexico City, while Elizalde is studying mechatronics engineering at Instituto Tecnológico de Hermosillo (Institute of Technology in Hermosillo, ITH) in the state of Sonora.

“Improving my English skills will help me have a better career,” said Elizalde, 22. “My goal is to go back home at the end of this class able to speak English fluently.”

Elizalde lives with her family back home in Hermosillo, so living in the Las Casas residence hall on ASU’s West campus is a new experience for her. “I am enjoying dorm life and making many new friends,” she said.

Manuel aspires to go to graduate school in the United States after completing his bachelor’s degree at IPN. He is looking to improve his communication skills in English through the AECP experience.

“I have some knowledge of English, but I need to improve my speaking skills,” he said. “I don’t feel I know how to express myself and my feelings well, which can be frustrating when you are trying to have a conversation.”

The students are becoming well-acquainted with the campus, as well as the surrounding community, through a series of events that are supplementing their studies.

“Hosting this large AECP cohort at West provides a wonderful opportunity for both the visiting students and for our campus,” said Marlene Tromp, vice provost at the West campus and dean of ASU’s New College of Interdisciplinary Arts and Sciences.

“The students are getting a real taste of American culture with an ASU football game, Black Friday shopping, and camping and s’mores on the quad,” Tromp said. “Of course, they’ll get to connect with American students as well. We have arranged engagement, for example, between the AECP students and both our college peer mentors program and students from Barrett, the Honors College. The synergy that exists between AECP and our academic and social programs will create exciting opportunities for all the students and faculty, and ASU West is the perfect landscape for that rich and genuine interaction.”

AECP has been offering specially designed intensive English language instruction at ASU since 1974. The program served more than 2,200 students from 59 countries in the most recent academic year.

“I recently ate breakfast with some of the Proyecta participants, all of them young women and future engineers,” Hill said. “As I listened to them share their dreams, their hopes, their excitement to study at ASU, I felt truly proud to work for a university that embraces the vision and understands the value of the Proyecta 100,000 initiative.”