In Paolo Bacigalupi’s most recent science fiction novel, “The Water Knife,” Phoenix is dried up and California and Nevada are not too far behind. The millions of people who rely on the Colorado River to survive are not only thirsty, but fighting for their lives.

It’s a compelling story that captures a not-so-distant future. Will Phoenix eventually collapse? Will the river dry up? 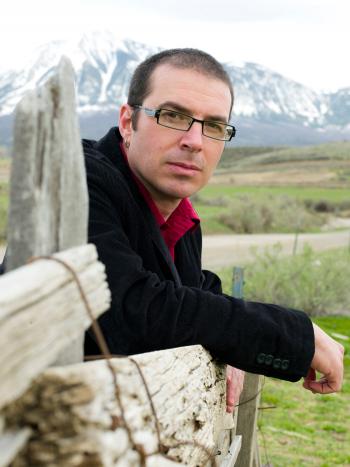 Paolo Bacigalupi is an award-winning science fiction writer whose latest novel, "The Water Knife" was released earlier this year. He will appear at ASU on Sept. 17. Download Full Image

As part of Arizona State University’s Imagination and Climate Futures Initiative, a partnership between the Walton Sustainability Solutions Initiatives, Virginia G. Piper Center for Creative Writing and Center for Science and the Imagination, Bacigalupi will visit ASU on Sept. 17, to share the inspiration behind “The Water Knife” and discuss how he uses creative writing to imagine the future of the Southwest.

Bacigalupi's visit will include a free public lecture titled "The Imagination Drought: Speculative Fiction as a Tool of Warning and Empowerment" at the Tempe Center for the Arts, and will feature a reception and book signing after the the writer's talk. Tickets for this lecture are available beginning Aug. 25.

“We are very excited to have Paolo Bacigalupi come to the setting of his latest novel and talk with students, faculty, researchers and residents about the state’s environmental challenges and how they relate to his gripping tale,” said Patricia Reiter, executive director of the Walton Sustainability Solutions Initiatives. “ASU’s Imagination and Climate Futures Initiative seeks to develop multiple narratives surrounding climate change. Bacigalupi is a perfect example of how the arts and sciences combine to help us visualize our future.”

After being exposed to environmental issues as High Country News’ online editor, Bacigalupi has become a leader in the emerging climate-fiction genre. His first novel, “The Windup Girl,” explores a world where fossil fuels are depleted and big corporations bioengineer food and people.

“Bacigalupi’s work exemplifies the broader mission of the Imagination and Climate Futures Initiative to open up our thinking about what might be possible,” said Ed Finn, director of the Center for Science and Imagination. “His arresting, deeply imaginative visions of the planet’s future are both soaring and gritty, anchored by deeply compelling characters struggling and thriving in the aftermath of climate change. Stories like his are vital to understanding what kind of world we’d like to live in and help us reinvent the present to reach that future.”

“In writing for teenagers as well as adults, Bacigalupi shows us that an awareness of environmental issues must be cultivated across generations,” said Jewell Parker Rhodes, Piper Endowed Chair and founding artistic director of the Virginia G. Piper Center for Creative Writing. “His fearless and intelligent novels are compelling, not only for their adventurous plots, but for their artistry in evoking raw and complex emotions for their deeply human characters.”

Journalism or justice? For Ramos-Mata, they'll each get him toward his goals

Houston native Joey Ramos-Mata is enraptured by journalism and has a goal of becoming a Supreme Court justice. He believes ASU's academics and reputation will help him reach his dreams.

Journalism or justice? For Ramos-Mata, they'll each get him toward his goals

The meticulous duels of court or the impassioned clarion call of journalism? 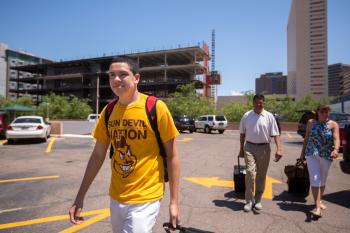 Joey Ramos-Mata (with his family's help) moves into Taylor Place on the Downtown Phoenix campus Aug. 14. The Barrett scholar is majoring in journalism, with the intention to pursue a law degree afterward. Photo by: Charlie Leight/ASU News Download Full Image

Incoming freshman Joey Ramos-Mata isn’t sure which lies ahead of him, but he is sure of one thing: He misses home.

The journalism major who is also a student in Barrett, The Honors College was “definitely” nervous about moving so far from his native Houston to attend ASU.

“I’m one of those weird kids who enjoys spending time with my family, but it’ll be good for me to learn how to function as an adult,” he said. “I think it’ll be good.”

Ramos-Mata fell in love with journalism when he took a class in the subject his freshman year of high school. The following year he joined the student newspaper.

“I’ve been there ever since,” he said. “I love to write in general, whether it's fiction or nonfiction. I find it relaxing; it’s a lot of fun. I got to write editorials for the rest of my year as a senior.”

Ramos-Mata writes short stories in his free time, as well as playing football and soccer with friends and fanatically watching movies.

He has big plans for his time at ASU, with an eye looking toward both working at the State Press and joining student government.

“My sister did that at community college, and it was exciting,” he said.

Asked what he’d like to cover in the news business, he said he doesn’t plan to go into it.

“I’m using it as a foundation for pre-law,” he said. “I’d love to be a part of making big decisions. We learned about the Supreme Court, and I was fascinated with how much power they have.”

Ramos-Mata believes ASU has what it takes to get him to the corridors of power.

“It’s one of the biggest universities and it’s widely renowned for many things,” he said. “I‘ve heard a lot about the journalism program and I’ve heard it’s really good. ... With a good law school and a good journalism school, I thought ASU was the perfect choice for me.”