An ecologist with Arizona State University, Elser and colleague Esteban Balseiro of the Universidad Nacional del Comahue will partner and study 30 to 50 alpine lakes close to San Carlos de Barliloche in Argentinian Patagonia. Climbing 3,000 to more than 10,000 feet, the duo will characterize regional lake nutrient chemistry and examine the lakes’ planktonic inhabitants. 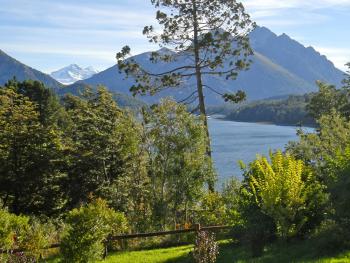 
“Esteban Balseiro has been performing some of the first comprehensive studies of this kind in this region and together we will extend his excellent work,” says Elser. “Studying nutrient limitation and plankton in lakes that are not yet influenced by human activities, even in their airsheds, makes Patagonia likely the best place in the world to establish a baseline for understanding lake nutrient supplies in as close to ‘ancestral,’ pre-development conditions as possible.”


Elser has pioneered the study of ecological stoichiometry, the examination of the balance of energy and chemical elements – most especially carbon, nitrogen and phosphorus – in ecosystems. Stoichiometric theory is becoming increasingly important in light of the multiple, and disproportionate, ways that humans are altering Earth’s biogeochemical cycles, Elser says.


For example, a study by Elser and his colleagues, published in the journal Science in 2009, showed that reactive nitrogen in the air stream, elevated by urbanization and agricultural intensification, literally rains down on terrestrial and aquatic ecosystems thought outside the touch of humans. The impacts his team documented were much greater than previously recognized, shifting the fundamental ecology of alpine lakes in the Colorado Rocky Mountains and in seemingly pristine watersheds in Norway and Sweden. Such findings make studying Patagonia’s lakes doubly important, Elser says, in view of the predicted population expansion and increased industrial and agricultural activity expected in South America in the coming decades.


“While nitrogen deposition impacts on terrestrial systems have been well studied, we are just learning how or if such human-induced nitrogen shifts affect biodiversity in aquatic systems,” Elser says.


How energy and materials flow in ecosystems, and how the ratio of key elements drive ecological dynamics, also underlies Elser’s focus on another element: phosphorus and its impact globally as a key component of fertilizer. Phosphorus helped fueled the “Green Revolution” in agriculture; however, scientists are beginning to note that quantities and qualities of this mined resources are limited, and that the bulk of the world’s supply resides in Morocco. And while more than 40 countries experienced food riots in 2008 due to rising food prices – due in part to a 700-percent spike in phosphorus fertilizer costs – phosphorus is commonly overused in the developed world, with run-off from agricultural areas tied to algal blooms and expanding oceanic dead zones in coastal areas.


In response to his and other scientists’ concerns, Elser, a professor in the School of Life Sciences in ASU’s College of Liberals Arts and Sciences, founded the ASU Sustainable Phosphorus Initiative at ASU in 2010 with colleagues Dan Childers, a professor with ASU’s Global Institute of Sustainability, and Mark Edwards, a professor with the W.P. Carey School of Business. The initiative spurred the launch of the international Sustainable Phosphorus Summit in 2011, coordinated by ASU doctoral student Jessica Corman, which brought together more than 100 scientists, engineers, teachers, students and entrepreneurs to discuss how to recycle, reclaim, reuse and more sustainably manage this limited resource.


South America is one of the regions of the world that has limited access to high grade phosphorus mines, and whose growing population means a heightened reliance on imported fertilizer for food. While experts cannot agree on the magnitude of the world’s reserves, Elser hopes to share the concerns raised at the summit to increase awareness among colleagues and policy-makers in Argentina, Chile, and Uruguay.


“This Fulbright award opens new doors for me. It means meeting new colleagues and engaging in research with Dr. Balseiro that I couldn’t have done anywhere else in the world,” says Elser. “Who knows? Patagonia’s aquatic habitats may be one last place to glimpse how lakes function without human perturbation, an essential baseline if we want to understand the impacts of human activities on water resources and create better outcomes for our future.”

A new series of books allows readers to "eavesdrop" on conversations held by noted writers at ASU's Pipers Writers House.

How would you like to pull up a comfortable chair by the fireplace (unlit, unfortunately), relax, and listen to an author describe his or her craft? And be able to ask questions as well?


Thanks to a new series of books inaugurated earlier this year by the Virginia G. Piper Center for Creative Writing, you can do just that. 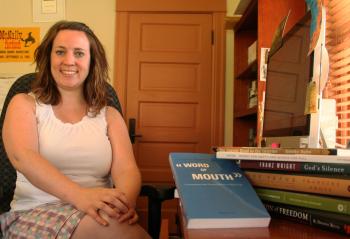 
Volume One of the series, “Word of Mouth: Conversations with Visiting Writers on Their Craft,” contains transcripts of conversations held at the Piper Writers House at Arizona State University with eight noted writers.


Copies of the first volume are available for $10. Credit card orders can be placed over the phone by calling the Piper Center at (480) 965-6018, or sending a check for $10 to: Arizona State University, Piper Center for Creative Writing, PO Box 875002, Tempe, Ariz., 85287-5002. Make check payable to “ASU Foundation” and note “Word of Mouth” on the check. Online ordering is forthcoming.


The paperbound book is small – roughly 4-1/4 by 7 inches, with 222 pages. It’s just the right size to tuck in a pocket or purse for waits at the doctor’s office or hair salon, or on the light rail.


The idea for “Word of Mouth” came from Peter Turchi, director of the Piper Center, which is housed in a historic home on the Tempe campus. “This past year, after poet and fiction writer Stephen Dobyns spoke eloquently to a full house, we realized an opportunity had been missed,” Turchi said. “We began recording the conversations, and posting brief clips on the Piper Center’s website; and that led to this.”


Before the advent of creative writing programs, and the books of interviews with writers they have spawned, writers learned their craft partly by talking with other writers, Turchi notes in his introduction.


“Oh, to be a fly on the wall of 27 Rue de Fleurus in the 1920s, when Gertrude Stein hosted Hemingway, Ezra Pound, Thornton Wilder and Sherwood Anderson, among others.”


Turchi adds that “though we can’t take you back in time to Gertrude Stein’s salon, we can make you a metaphorical fly on another wall: this one in the Virginia G. Piper House, the former president’s cottage, very nearly in the middle of the Tempe campus of Arizona State University.”


The Piper Writers House is an appropriate place for such literary conversations to take place, Turchi said, because the house does have a literary bent in its history: Robert Frost once slept in one of the upstairs rooms.


So, he concludes, “Imagine you’re walking past Old Main, under central Arizona’s consistently clear blue sky, to a wood and brick house at the center of a grassy oasis in the desert. A well-intentioned undergraduate is encamped in the shade of a tree, drowsing over required reading; a cat rustles in the bushes; a young couple huddles on a bench by the murmuring fountain…but you’re headed up the sidewalk, onto the wide porch, and through the front door. Just in time – quick, grab a seat…”


Since the conversations truly are back-and-forth exchanges between writer and readers, they are informal and easy to read.


Here is a sampling of what some of the authors had to say in Volume One.


Harold Schechter, author of “The Devil’s Gentleman: Privilege, Poison, and the Trial That Ushered in the Twentieth Century”:


Q: Do you think you’ll write anything about current crime?


A: Well, I’ve done these encyclopedic books like “The to Z Encyclopedia of True Crime and “The Serial Killer Files” and those include contemporary stuff. But I’m not really interested in dealing with victims or, especially, actual criminals. I sometimes get fan letters from people in prison, and there was a time when I would answer them, but then I discovered that’s often not a great relationship to establish. I’m a 19th century Americanist. My background is as a literary scholar. That’s what I teach. That’s what I did my dissertation on. I love doing the research into these older crimes – the one that I’m hoping to do next happened in the 1870s. And I like spending time in the library. That’s why I became a college professor.”


Francine Prose, author of “Anne Frank: The Book, The Life, The Afterlife”:


Q: What is your reaction when people see things in our fiction that you neither intended nor even thought?


A: Well, it’s in a mirror, you know. I mean, if you’re writing, it’s a mirror. People see themselves or they see their own problems. Unless it’s insulting in some way, which it hardly ever is, that’s fine with me. One of the things that I love is going into high schools. Now that I’ve started writing so called YA novels, I go into high schools, and that’s what they’ve read, and it’s not that much fun. I mean, it is still fun. But what’s really fun is going to high schools when they’ve read a short story. I can’t tell you how many times they’ve said, “Do you know that you have stars in the first sentence and stars in the last sentence?” And I go, “No.” They have these fresh open minds with all these brain cells, so they can pick it up.


R. Dwayne Betts, a poet and the author of the memoir “A Question of Freedom: A Memoir of Learning, Survival, and Coming of Age in Prison”:


Q: “When did you actually think about sitting down and starting to write this memoir? How long after you left (prison)?


A: I always wanted to be a poet and a professor, and I’ve been teaching poetry since I’ve been out of prison. For free, for $200, for fifty cents, for lunch, and I was teaching in prison, too. I always wanted to be a teacher, a professor. And I wanted to write a memoir just because I didn’t like a lot of prison memoirs that were written. But I wasn’t sure if I was emotionally ready, and I always had a lot of stuff going on: family, school, work.


(After being interviewed by a reporter, and realizing that the reporter was going to write about his whole life, and not just the book club, Young Men Read, that he started after prison, he signed a contract with Penguin in


…I wanted to write a book that engaged with those questions and prompted the kind of conversation that might save a life, as opposed to writing a book in which it was like: before prison, prison, hero. So that’s the back-story. I think it’s a miracle, too, because I don’t think stuff like that usually happens.


(Betts was an honors student in high school, and at age 16, he took part in a carjacking, was tried as an adult, and spent nine years in jail. He graduated from the University of Maryland.)