As one of this year’s Fulbright Scholars, ASU computer science professor Arunabha Sen will have an opportunity to work with some of Europe’s leading experts in his field to advance research on wireless sensor networks, robot networks and radio-frequency identification (RFID) devices. 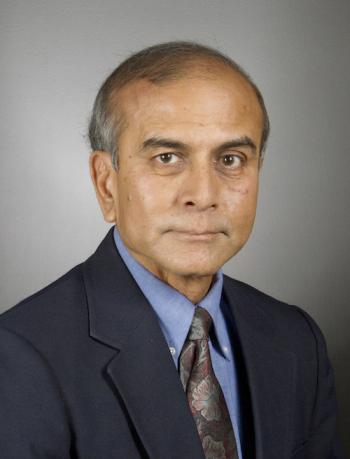 Sen is a professor of computer science and engineering in the School of Computing, Informatics, and Decision Systems Engineering, one of ASU’s Ira A. Fulton Schools of Engineering.

Each year, the U.S. Fulbright Scholar Program awards about 800 highly sought after teaching and/or research grants to selected U.S. faculty and experienced professionals, enabling them to engage in collaborative studies and research in more than 125 countries. Award recipients are chosen for exemplary achievements and proven leadership in their fields.

Sen conducts research in resource optimization problems in communications, power distribution and social networks. In recent years, his research has been funded by the Army Research Office, the Air Force Office of Scientific Research, the Office of Naval Research, the Defense Threat Reduction Agency and the National Science Foundation.

Computer science and engineering make extensive use of discrete mathematics, which Sen found especially stimulating. “Mathematics is said to be the language of engineering. I became interested in my research specialties primarily because they are based on discrete structures, and discrete mathematical techniques can be used to find their solutions,” he said.

During his time in France, he will be collaborating with scientists and engineers of the Future Ubiquitous Network (FUN) research group for the design of resource-efficient algorithms for radio-frequency identification (RFID) device tagging in a mobile environment.

Describing his research as use-inspired rather than curiosity-driven, Sen said the work excites him most because it is “intellectually challenging and at the same time immensely useful.”

Aside from having the opportunity to work with some of the leading French scientists in his field, Sen hopes his Fulbright experience will ultimately benefit his students at ASU. “The acquired knowledge will be passed on to graduate and undergraduate students at ASU through our curricula,” he said.

In almost three decades at ASU, Sen has mentored more than 60 graduate students. He served as the associate chair of graduate programs and research in computer science and engineering from 2001-2007. He started the International Workshop on Network Science for Communication Networks, sponsored by the Institute of Electrical and Electronics Engineers (IEEE) in 2009, and he will be co-general chair of the workshop in 2015.

Sen also served as an associate editor of the IEEE Transactions on Mobile Computing research journal and on the program committees of various IEEE and Association for Computing Machinery conferences and workshops.

The ASU Alumni Association is accepting nominations for its annual Founders’ Day Awards, which will be presented at the Arizona Biltmore Resort & Spa on Thursday, March 5, 2015.

The awards will be presented at the Founders’ Day 2015 celebration, scheduled to take place at the Arizona Biltmore Resort & Spa on Thursday, March 5, 2015.

First celebrated in 1960 on the eve of the institution’s 75th anniversary, Founders’ Day salutes the enterprising spirit of those who helped the university’s predecessor, the Tempe Normal School, become a reality on March 7, 1885.

The focus of this year’s event will be sustainability, and the awards will honor alumni, faculty and university supporters who are actively engaging in innovation to create a more sustainable world.

Potential honorees may be nominated from any field that touches upon sustainability, including basic science, innovation, technology, business, law and public policy.

The nomination deadline is 5 p.m., Friday, Dec. 5. Nominations are being accepted in the following categories:

Faculty Achievement – This award is presented to faculty members who have demonstrated exemplary contributions related to sustainability in any of three categories: Teaching, Research and Service.

In addition to the awards presented by the Alumni Association, the ASU Foundation For A New American University will present its Philanthropist of the Year award at the Founders’ Day event. This award, first given in 2010, allows the Foundation and the university to recognize community-minded citizens who have made a difference by supporting ASU-affiliated organizations and institutions.

To make a nomination for the 2015 Founders’ Day Awards, visit: asu.edu/foundersday.