From field to lab: Exhibition covers 30 years of research

The scene is immersive: a dirt hill strewn with “fossil” fragments – a jaw bone, a piece of arm bone (both well-painted casts) – and the tools of the trade – a shovel, sections cordoned off with string, trowels and dental picks, backpack perched in the corner. An engaging foreground set against a backdrop of the arid striations of the hills of Hadar, Ethiopia, the installation is as detailed and “life-like” as any major museum vignette in the country. However, it resides in a gem of an exhibition space in the School of Human Evolution and Social Change, known as the Museum of Anthropology.

The exhibition is “Becoming Human: 30 Years of Research and Discovery,” one of the feature events of ASU’s Institute of Human Origins 30th anniversary. The “founding fossil” Lucy, called “queen of hominin skeletons” in a recent issue of Science, bookends the entrance wall of the exhibition – on the left, a well-known cast of the original fossil skeleton, and on the right, a “life-size” cutout illustration of what an Australopithecus afarensis may have looked like. The body of the exhibition, though, expands to the breadth and depth of the institute’s anthropological research that has spread into many disciplinary branches from that initial discovery. 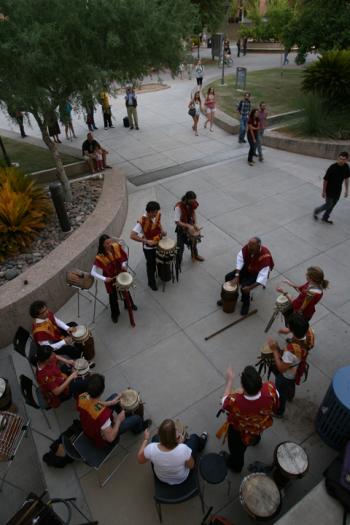 As two sides of the same coin, the front museum wall features a 3D timeline of institute scientists’ research from the last 30 years, and the reverse side features the family tree of evolution with institute scientists speaking about their research from iPads on each branch of the tree. Heavily illustrated with original photographs from field research sites across Africa, the exhibition takes you to caves at the southern tip of Africa where a last, small group of humans may have survived on shellfish and tubers; to Olduvai Gorge and Tanzania where you learn the importance of geology and animal communities to the study of anthropology; to the lab, where the fruits of all that field research are analyzed to make connections to known knowledge and to create new theories and ideas.

Highlighting one corner of the exhibition is “Don’s Den,” a comfortable place to pick up one of nine books written by famed ASU paleoanthropologist Donald Johanson or peruse scientific papers published in Science, Nature, or Scientific American by one of the institute’s scientists, all faculty in the School of Human Evolution and Social Change in ASU's College of Liberal Arts and Sciences. A slideshow featuring images of travel and research by institute board members, scientists, and students animates the back wall.

The exhibition has more technology than any previous undertaking by museum staff. Seven computers or DVD players and seven iPads make this an ever changing, interactive tableau for the museum visitor. “This exhibition was a challenge on many levels, but the Museum of Anthropology has been charged with taking faculty research and making it real to our visitors, showing them why it’s important in their lives,” says museum director Judy Newland.

At one computer, school-aged visitors can even learn about writing a “Letter to Lucy” for an essay competition to answer the question “What makes us human?” that will send professor Johanson to the winning student’s school. Educational outreach is one important component to the museum’s mission and a group of 120 fifth and sixth graders are expected to visit this week.

The exhibition opened September 8 with a greeting “drummed” by an African drumming student group from the School of Music led by professor Mark Sunkett, which welcomed over 200 people to a ribbon cutting ceremony by institute director William Kimbel and founding director Johanson and School of Human Evolution and Social Change executive director Alexandra Brewis Slade.

The museum is open from 11 a.m.-3 p.m., Monday-Friday, and the 30th anniversary exhibition will remain through Dec. 16. The museum will also be open for this year’s Homecoming celebration, Oct. 29 and will open for an hour after Institute of Human Origins lectures on Oct. 6 about the origins of the genus Homo and Dec. 1 about the origins of technology. The lectures are from 5:30 to 7 p.m. at the Carson Ballroom, Old Main and are free and open to the public.

The exhibition is sponsored by the Institute of Human Origins, Museum of Anthropology, and School of Human Evolution and Social Change. For museum hours, guided tours, and special events in association with this exhibition, go to http://asuma.asu.edu, email anthro.museum@asu.edu, or call 480.965.6224.

Shade – we all crave it during sun-scorched days, and the shade that trees provide creates an escape from the heat. So where are all the trees?

The Sustainable Cities Network at Arizona State University’s Global Institute of Sustainability is aware of this need for more trees in our urban world. Partnering with the cities of Glendale, Mesa, and Phoenix, the Network hosted the Valley’s first Regional Tree and Shade Summit on March 9, in Phoenix. The summit brought together public officials, municipal staff, nonprofit organizations, and professional associations to identify strategies for increasing tree and shade and green infrastructure, and creating a healthier, more livable and prosperous Arizona. 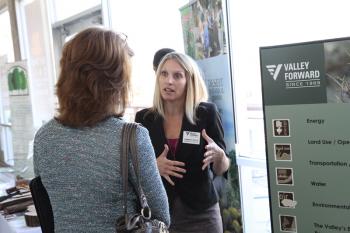 Funded by the State of Arizona Forestry Division and the U.S. Department of Agriculture Forest Service, the Regional Tree and Shade Summit stressed the importance of collaboration in cultivating green infrastructure. By bringing together those who have the power and skills to address the problem, the Summit set out to increase awareness about tree and shade issues, and promote practices to maintain trees and shade.

Local and national experts spoke on the importance of coordinating efforts to increase green infrastructure in Arizona. They addressed the importance of increasing the tree canopy, overcoming obstacles with local codes, increasing the quality of life in neighborhoods, reducing water consumption, and promoting sustainable landscape design and maintenance. These topics inspired lively discussions and diverse perspectives of how to address these challenges.

The City of Phoenix’s Shade Phoenix 2030 plan was presented in order to provide attendees with a working model that could be built upon for future success in expanding the region’s urban forest. By providing community leaders with the blueprints for the City of Phoenix’s plans, these communities can build and adapt their own plans to increase urban forestry in their cities.

Scholarships were awarded to eight arborists in valley cities to protect the future of our urban forests, increasing the number of certified arborists working for government agencies. This part of the program is meant to  help minimize long-term costs associated with tree planting and maintenance, contribute to water conservation efforts, aid in educating additional city staff on the importance of green infrastructure, and promote and expand regional urban forestry efforts.

In order to continue the success of the Summit, ASU’s Sustainable Cities Network is hosting Green Infrastructure Workgroup meetings. These meetings aim to continue discussions, networking, and collaboration in order to increase awareness and understanding of green infrastructure.

The award-winning Summit was held in downtown Phoenix at the Civic Space Park, providing a location that exemplifies some of the sustainable techniques featured during the Summit. Participants were given a tour of the park and educated on how it is possible to blend trees and landscape to create sustainable public spaces.