The universe is home to a variety of exotic objects and beautiful phenomena, some of which can generate almost inconceivable amounts of energy. ASU Regents’ Professor Sumner Starrfield is part of a team that used the Large Area Telescope (LAT) onboard NASA’s Fermi Gamma-ray Space Telescope satellite to discover very high energy gamma rays (the most energetic form of light) being emitted by an exploding star. The surprising discovery dispels the long-held idea that classical nova explosions are not powerful enough to produce such high-energy radiation.

In March 2010, scientists using the LAT reported a surprising discovery: detection of gamma rays that appeared to come from a nova, V407 Cygni. The LAT, in orbit around the Earth, views -20 percent of the sky instantaneously, and the entire sky every three hours. It is the most sensitive gamma-ray space telescope ever flown. 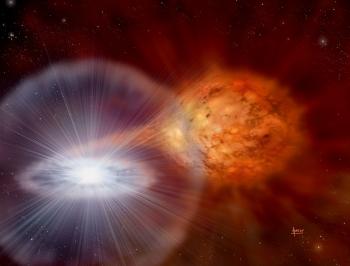 A nova is observed as a sudden, short-lived rapid increase in the brightness of an otherwise inconspicuous star. It results from runaway thermonuclear explosions that typically take place in a binary system on the surface of a white dwarf, fueled by mass from a companion star. The outburst occurs when a white dwarf erupts in an enormous thermonuclear explosion. The explosion is equivalent to about 100,000 times the energy that the sun gives off every year. Unlike supernovas, novae do not result in the destruction of their stars.

Although novae produce bright optical events, they had not previously been considered as potential sources of high energy gamma rays since they are not predicted to accelerate particles to the required energies (very nearly the speed of light). Few cosmic marvels can accelerate particles to the energies required to generate gamma rays, billions of times more energetic than the type of light visible to our eyes. Researchers had expected and seen X-rays from the resulting waves of expanding gas in prior novae.

The finding overturned the notion that novae explosions lack the power to emit such high-energy radiation. Subsequently, in June 2012, two more novae were detected with the LAT, Nova Sco 2012 and Nova Mon 2012, thus heralding novae as a new gamma-ray source class.

These findings are published in the Aug. 1 issue of the journal Science with Teddy Cheung, an astrophysicist at the Naval Research Laboratory in Washington, as the lead author.

“This was a completely unexpected discovery and we still don’t understand the cause,” says computational astrophysicist Starrfield, a professor in the School of Earth and Space Exploration at ASU. “No one suspected novae were violent enough to be emitting at these very high energies. However, it now seems possible that a signification fraction – near 100 percent – of novae are gamma ray sources.”

The white dwarf star V407 Cyg lies 9,000 light-years away, in the plane of our Milky Way galaxy. It erupted in a rare type of nova called a recurrent symbiotic nova, in which the companion star is a pulsating red giant star (about 500 times the size of the sun) blowing out a strong stellar wind. The explosion of the white dwarf occurs inside the atmosphere of the companion star.

Researchers suggested that the gamma rays in the nova were generated when the blast waves from the nova collided with the very dense winds from the red giant, something that doesn’t appear in classical novae.

Although the LAT followed up on later optically bright classical novae, it saw nothing for two years, and the theory that V407 Cyg was a special case seemed confirmed. Then, in June 2012, two separate novae were seen in gamma rays: Nova Sco 2012 and Nova Mon 2012 both emitted detectable levels of gamma rays.

But Nova Sco 2012 and Nova Mon 2012 are classical novae accreting from small, nearby companions. There’s no thick stellar wind to produce a shock like there is in V407 Cyg. So where are the gamma rays coming from?

The answer at the moment is: We don’t know.

Although researchers can’t yet explain how and why, what we do know is that novae can be gamma ray emitters, and they are not as rare as originally suspected.

“We are puzzled, and ongoing studies of possible causes are underway via computer modeling of the events,” says Starrfield. “This exciting discovery is telling us something important about the explosions of classical novae, but we don’t, as yet, know what it means.”

Public can drop off unused prescriptions at ASU Police Department

The Arizona State University Police Department will join police agencies across the Valley in a new program that provides collection containers for people to drop off unused prescription medicines.

Public can drop off unused prescriptions at ASU Police Department

The Arizona State University Police Department will join police agencies across the Phoenix area in a new program that provides collection containers for people to drop off unused prescription medicines.

The partnership between the Arizona Crime Prevention Association, Inc., the Arizona Attorney General’s office, and in cooperation with the Arizona Prescription Drug Misuse and Abuse Initiative, has enabled 10 new drug collection containers to be placed in police department lobbies in an effort to curb the misuse and abuse of prescription drugs.

“ASU’s Police Department is committed to the safety of the university community, and this service is available for any citizen to use. Dropping off unused prescription drugs for safe disposal by police ensures that dangerous substances won’t be used for illicit purposes,” said Michael Thompson, ASU Police Department interim chief.

An interactive map at www.acpa.net lists permanent collection sites where residents can search for the nearest collection site by entering their address or reviewing the map. The site also provides hours of operation, as well as guidance on what can and cannot be dropped off.