University presidents and faculty, international leaders and experts in the field convened at Arizona State University to discuss the role that higher education and research institutions play in advancing quality of life, education, sustainability and economic development in the Arizona-Sonora region.

The Arizona-Sonora Colloquium at ASU's McCord Hall on May 20-21 kicked off with a keynote address by ASU President Michael M. Crow, who noted that the university’s brand-new charter establishes the importance of the institution’s local impact and social embeddedness. 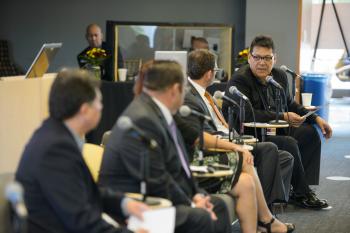 One way of ensuring that is through the development of collaborations among the many universities and centers for research and innovation within the Arizona-Sonora region.

“We need to complement each other, to help each other. I think we need to have a global vision with a local focus,” he said.

Speakers at the colloquium’s closing roundtable discussion pointed out how such issues as water scarcity and immigration affect the entire region, regardless of where the “real border” between the U.S. and Mexico is, which only highlights the importance of working together.

“This all has to do with the well-being of the region overall,” said Heriberto Grijalva Monteverde, rector of Universidad de Sonora.

Jim O’Brien, senior vice president of University Affairs and chief of staff to President Crow at ASU, laid out some simple steps to achieve that overall well-being: identify project areas, create an agenda of issues important to the region, and hold each other accountable for working toward those goals together.

“We can do more when we work with others than when we try do it alone,” O’Brien said. “It’s too big a task to take on water issues alone, to take on education alone, to take on social issues of the region alone. We need partners, and we’re committed to taking advantage of this opportunity to build new partnerships.”

After the closing roundtable discussion, Francisco Lara, associate professor in ASU’s School of Transborder Studies, fielded questions from attendees on topics such as health and involving the private sector in collaborations.

“We have to try new things,” Lara told the crowd. “We should not be afraid of failure. We have to work together. We have to think of the region.”

The Arizona-Sonora colloquium is coordinated by the ASU Program for Transborder Communities (PTC) of the School of Transborder Studies and the College of Liberal Arts and Sciences, in collaboration with the Universidad de Sonora (UNISON), the Centro de Investigación en Alimentación y Desarrollo (CIAD) and El Colegio de Sonora (COLSON). The colloquium is also supported by ASU’s Mexico and Latin America Initiatives at the Office of University Affairs.

ASU alum Samyak Shertok will launch a "Healing Through Poetry" project in Nepal this summer to help those affected by the recent earthquakes.

Samyak Shertok dialed the familiar pattern of numbers over and over as the sun came up in Tempe. Each time the result was the same: no answer.

He told himself the phone lines were down, or busy. Finally, several hours later, his mother answered. The connection lasted only a few minutes, but it was enough. 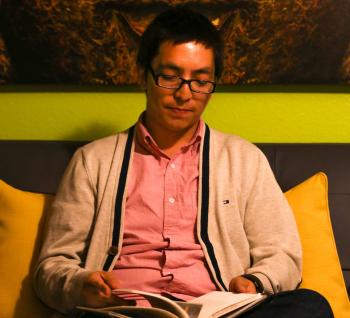 After five hours of trying, when the call

finally goes through & I hear

my mother’s voice, I learn

how to unash my lungs.

For many people with loved ones in Nepal, the morning of April 25 brought tremendous anxiety and uncertainty.

More than 8,000 people died as a result of the temblors, and more than twice as many have been injured. Recovery efforts remain underway.

Shertok, an Arizona State University graduate living in Tempe, did eventually confirm that his immediate family had escaped harm. But others in his circle were not so fortunate.

“My niece lost her daughter in the house next to the one I grew up in," he said. "The entire family of our next-door neighbor got caught when the house collapsed on them."

Shertok’s mix of emotions after the quake – his anguish at not being able to reach his mother, his nearly sickening relief when he did – overwhelmed him. So he did what he usually does at times like these.

He started to write.

Dear Himalayas, this morning I have nothing

to offer you. Not even a butter lamp

for your unwinged Garuda

now cursed to an exhale.

Shertok published the poem “Aftershocks” on May 6 in the Nepal-based La.Lit magazine, an English-language literary journal.

He also read the poem aloud at a vigil held by ASU’s Nepalese Student Association. Many in attendance – Nepal-born and otherwise – said that it had affected them deeply. One woman said the poem gave her goosebumps.

Shertok now knew what he needed to do.

Shertok was born in the small Nepalese community of Phalam Sangu in the Sindhupalchok district. The village had no electricity, and growing up, the children created their own fun without the aid of video games and televisions.

That creativity may have led to Shertok's way with words. He attended Brigham Young University in the U.S., majoring in English. From there, he was accepted into ASU’s competitive, highly ranked creative writing program, where he earned his Master of Fine Arts in fiction writing in 2014.

Since then Shertok has been volunteering with Poesía del Sol, the ASU creative writing program partnership with Mayo Clinic. Each week he interviews palliative-care patients and then crafts poems for them based on those interviews.

The program uses what it calls “lyric medicine” to enrich patients’ lives using storytelling. It is premised on the notion that we all have stories to tell, and that in sharing them we can begin coming to terms with difficulties, even disasters.

The concept of using writing – especially poetry – in healing is more than a theory; its efficacy has been demonstrated in multiple studies. Several prominent schools of medicine, including Yale and Mount Sinai, now incorporate poetry into their programs.

Writing seems to be especially effective in dealing with trauma. That has been the case for Shertok. He penned "Aftershocks," he said, as a "love letter" to his country.

“This was just another way of saying: ‘Dear Nepal, I'm not sure if I can do anything for you, but I feel your pain and want to sit next to you as you grieve.’ "

He said that when he completed the poem, he “felt a great sense of visceral release.”

Inspired by the response to his “Aftershocks” poem, Shertok will launch a project he’s calling “Healing Through Poetry” in Nepal this summer. He’s hoping to crowdfund the effort through a Kickstarter campaign.

To set his vision into practice, Shertok plans to literally go house to house, starting in his home district of Sindhupalchok, talking to the people. He will begin collecting stories and writing poems based on them, similar to what he has been doing for ASU’s Poesía del Sol.

He is also proposing to run poetry workshops for young people, whom he’ll encourage to work through their experiences by writing about them. The project will feature workshop students and community participants in poetry readings at local venues, perhaps even at sites of earthquake destruction.

He then hopes to publish the resulting poems in a book.

“While it won't initially provide the victims with tangible aid, it will serve their emotional and psychological well-being in the long run," Shertok said. "Healing Through Poetry strives to help Nepal heal and rebuild through poetry that at once embraces, documents, and transcends this historic tragedy as it is happening."

The Kathmandu sky sliced with unlive

or a body. The Vishnu Temple: a pile

of sandalwood beams & too many prayers.

I sit at my desk & stare at the paper

white as the song of the earth

as it splits to womb so many Janakis.

Unable to find words, I write

until prayer becomes my body.