Arizona State University has expanded its Furnace Technology Transfer Accelerator program to the U.S. Department of Defense. As another extension, ASU students will now have the opportunity to start businesses based on technologies from the San Diego-based Navy Department of Defense lab.

The expansion of Furnace

ASU’s Furnace accelerator program forms, incubates and launches startups based on technologies developed in research labs that partner with the university. The program, which was first launched in Arizona, expanded to Rome, New York, in 2014 through a first-of-a-kind partnership with the U.S. Department of Defense.

Since launching in 2014, ASU has supported the development of the entrepreneurial ecosystem around the lab in Rome, New York. This work includes identifying local economic development partners and investors, and assisting with startup team and technology matching.

On Feb. 21, an ASU-sponsored launch event in New York showcased the new companies.

“We saw community members, economic development partners and investors come together in New York to mark the start of an intensive six-month accelerator experience,” said Jeff Abbott, ASU’s program manager for the Furnace Program. “This indicates great community involvement of the eight startup companies that were selected through a competitive application process.”

Over the next six months, ASU will support the development of the startups through a partnership with early-stage venture capital firm, Wasabi Ventures. The program will provide each startup up to $25,000 in seed funding, which will be disbursed to teams as they achieve important acceleration milestones. Teams will also receive office space and entrepreneurship mentorship.

ASU entrepreneurs are invited to participate in the next round of startup formation based on San Diego Navy lab technologies.

“As we reviewed the great progress in venture creation in New York, it became clear that we could offer our students the opportunity to form teams around these technologies and empower them to start ventures right here in Arizona,” said Garret Westlake, associate dean of student entrepreneurship at ASU. “Giving our students access to existing technology and intellectual property available in the Furnace program may prompt creative ideas and engage more of our students and faculty in entrepreneurial endeavors. It will be exciting to see what the ASU community can do to commercialize Department of Defense technology and grow the Arizona economy.”

How it will work

Students and faculty are invited to preview the available San Diego technologies at furnaceaccelerator.com.

The W. P. Carey School of Business and the Office of Entrepreneurship and Innovation will host a Co-founder Mixer and Lean Launch info Session from 5:30 to 7 p.m., March 26 to answer questions and help interested individuals form teams around select technologies. RSVPs are strongly encouraged.

Teams are invited to attend an open pitch competition that will be held on the ASU Polytechnic Campus Launch Day on April 8.

Winning teams will be offered an all-expense-paid trip to San Diego to meet the inventors and visit the San Diego Navy lab. Winners will be accepted into the Furnace accelerator program with Wasabi Ventures, which includes office space, mentoring and a dedicated venture manager at SkySong to assist students in scaling their ventures.

Please contact tracy.lea@asu.edu in the ASU Office of Entrepreneurship + Innovation if you have any questions about the technologies and the application process.

ASU’s Furnace Technology Transfer Accelerator program is an innovative startup accelerator designed to form, incubate and launch new companies by helping them license technology and intellectual property from a participating research institution. Information regarding the program is available here.

Infrared and visual images of the Martian surface taken by Arizona State University's THEMIS camera are mapping dust and rocks at the landing site for NASA's upcoming InSight mission to Mars.

NASA's next Mars space probe, a lander named InSight, is due to touch down on the Red Planet in September 2016 with a mission focused on the planet's internal properties. Its landing place has been chosen with help from a Mars-orbiting, heat-sensitive camera designed and operated at Arizona State University.

Working at nine infrared and five visual wavelengths, the Thermal Emission Imaging System (THEMIS) on NASA's Mars Odyssey orbiter has been in operation since early 2002. Its data have let scientists create a near-global map of Martian surface properties. 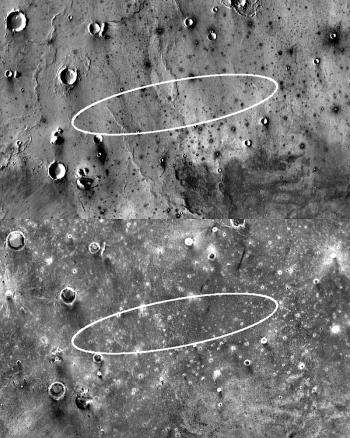 More recently, THEMIS has been surveying the rocks, sand, dust and surface materials across InSight's four candidate landing areas. NASA has now picked as the prime landing site one location in Elysium Planitia, a region where ancient lava flows cover the ground.

"To land a probe safely on Mars, you need to come down in a flat, smooth place," said Jonathon Hill, of Arizona State University's Mars Space Flight Facility, part of ASU's School of Earth and Space Exploration. A staff member and doctoral student in planetary science, Hill has a day-to-day role in targeting specific areas of Mars for THEMIS to image.

"Picking a safe place," he said, "means the landing site can't be full of big rocks or covered in a thick layer of dust."

By measuring how quickly the ground cools at night or warms in sunlight, THEMIS can tell the proportion of rocks and dust on the ground and thus help paint a picture of what awaits the lander at the surface.

InSight (short for Interior Exploration using Seismic Investigations, Geodesy and Heat Transport) carries two main instruments, a heat-flow probe and a seismometer, both being deployed using a robotic arm. The heat probe requires that the ground within reach of the arm be penetrable by the probe, which will hammer itself into the soil to a depth of three to five yards, or meters.

"InSight's mission planning team worked closely with us to find places with a suitable surface for the spacecraft to go," says Hill. Additional data and imaging came from the High Resolution Imaging Science Experiment (HiRISE) on NASA's Mars Reconnaissance Orbiter.

While THEMIS' main contribution to NASA's site choice was its infrared data, THEMIS is also currently taking visual images of the entire landing site ellipse, which represents the target zone. The visual images each cover a smaller area, but have about five times sharper resolution than the infrared ones.

Scouting ahead is old story

Checking out a Martian landing site ahead of touchdown is a now-familiar role for THEMIS, said ASU's Philip Christensen. A Regents' Professor of geological sciences in the School of Earth and Space Exploration, Christensen is the designer and principal investigator for the THEMIS camera.

"Before NASA's Curiosity Mars rover landed in Gale Crater in 2012," he said, "THEMIS surveyed the surface materials at dozens of candidate landing areas scientists were evaluating." And earlier, he noted, "THEMIS selected the landing site for NASA's Phoenix Mars probe, which landed in 2008, by mapping the rocks and dust at numerous potential sites to find the safest one."

Unlike NASA's recent Mars landers, InSight is not a rover. Built using the same flight platform as the Mars Phoenix lander, InSight will touch down in one place and stay there for its entire mission, projected to last two Earth years.

But immobility means that if InSight came down in a location that's too dusty or rocky, it wouldn't be able to drive away from the landing site and find a better location. This raised the stakes on where it lands, and that's where THEMIS has played its part.

Said Christensen, "We're delighted to help find a good landing spot for InSight. And also to be helping scientists learn more about Mars, and deepen our picture of this intriguing world next door to Earth."

The School of Earth and Space Exploration is a unit in ASU's College of Liberal Arts and Sciences.