Every year, dozens – sometimes hundreds – of migrants from Mexico and Central America die of exposure, thirst, violence or natural causes in the deserts of southern Arizona.

Few of these people are immediately or easily identified. Assigning names and stories to the unnamed majority becomes the responsibility of investigative teams that include forensic anthropologists who draw clues from the physical remains. 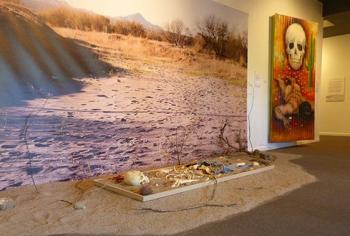 The realities of these deceased migrants and the science that reveals details of their lives and deaths are at the heart of the latest exhibit at Arizona State University’s Innovation Gallery.

In a sense, the exhibit is about the human skeleton, primarily as it is used by researchers and investigators. Although bones figure prominently, and realistic hands-on displays invite guests to feel and study them while practicing identification techniques, no actual human remains are used.

Much of the exhibit’s lab-themed insight was provided by Laura Fulginiti, adjunct faculty in the School of Human Evolution and Social Change, and forensic anthropologist at the Maricopa County Office of the Medical Examiner.

Fulginiti, like all forensic anthropologists, uses physical anthropology and human biology to generate a profile of the deceased. She can ascertain the height and age of a person at time of death based on a study of their bones. She can also determine sex, certain physical characteristics and life ways, and detect signs of trauma and disease.

Many of the tools of her trade – from scalpels, dental mirrors and evidence bags to Elmer’s glue and an air puffer – are shown in “Dr. Fulginiti’s Cabinet of Curiosities.” The display isn’t meant to make light of Fulginiti’s work but rather to demonstrate the complexity and oddly creative nature of her tasks.

As she explains in a video interview that plays in a loop, she is charged with “speaking for the dead.” Whether determining an identity or a cause of death or both, it is her duty to examine a human’s skeletal remains and solve a mystery. Homicide and missing persons cases often hinge on her findings and her testimony.

Other video presentations play throughout the exhibit, giving a more expansive view of forensic anthropology. The documentary “Following Antigone: Forensic Anthropology and Human Rights Investigations” delves into how forensic anthropologists help identify victims of genocide and remains from mass graves.

Also featured are interviews with bioarchaeologists Christopher Stojanowski and Kelly Knudson, associate professors in the School of Human Evolution and Social Change in the College of Liberal Arts and Sciences. Stojanowski, who teaches a forensic anthropology class at ASU, discusses the use of DNA analysis and the latest technologies in the emerging field of bio-history. Knudson, director of the Archaeological Chemistry Laboratory, talks about her work doing isotopic analysis of teeth, which can reveal what people ate and where they lived.

Exhibit coordinator Marco Albarran spent many hours exercising his own creativity in building out the exhibit. An artist and a Latino community and culture advocate, he is the founder of the CALACA Cultural Center and the Arizona Latino Arts and Cultural Center. He recruited several of his colleagues to produce or loan work for the exhibit.

One of the largest installations is an ofrenda, or altar-shrine, for the border victims that challenges visitors to consider the memories of the deceased, the loss to their loved ones, the human potential extinguished. Other pieces include paintings and sculpture, each designed to make a political statement as well as pull viewers into the desperation and hopes of those who choose to undertake a dangerous border crossing.

Reminders of those dangers are everywhere. The placement of art and objects target an emotional impact. That is apparent from the moment one enters the gallery.

Bookending a life-size skeleton half-buried in sand, placed before a photo blowup of an arroyo marked with footprints, are huge paintings representing the fatal end of migrant journeys. Near one is a Humane Borders-produced map of southern Arizona peppered with more than 2,400 red dots, each signifying a migrant death between 1999 and 2013. By the other is a poster – the type distributed in public locations near the border – warning in Spanish “Don’t Do it! It’s Hard! There’s Not Enough Water!”

The idea behind “Speaking for the Dead” came from a recommendation by the School of Human Evolution and Social Change’s Museum Committee. It is the latest exhibit in the gallery – part of the school’s Center for Archaeology and Society – planned around faculty research.

The center’s co-director, Richard Toon, who also directs the school’s museum studies program, conceptualized the exhibit over the last few semesters in concert with his graduate students. He says the main goal was to illustrate that forensic anthropology is very different than portrayed on television.

“We ended up choosing the topic of migrant border deaths to show an issue of relevance to people in Arizona,” he explained. “We thought artists could express the humanitarian issues involved, while our hands-on activities could demonstrate some of the scientific work.”

Toon hopes that visitors will take the time to absorb and personally interpret the material. He believes the exhibit is suitable for most audiences. Originally, he suggested that it might not be appropriate for younger children, but even with the warning, several parents have brought through youngsters who reportedly appreciated the displays and activities.

Visitors are asked to complete a survey upon exit. No complaints have been received. “In fact, our evaluation shows it is overwhelmingly thought sensitive and compelling,” Toon said.

The exhibit runs 11 a.m.-3 p.m., Tuesday-Friday, through May. It will close for the summer and re-open in October. Admission is free.

The Innovation Gallery is located in the School of Human Evolution and Social Change building at the northwest corner of Tyler and Cady Malls on the ASU Tempe campus. For more information, call Celeste Scott, assistant director of the Center for Archaeology and Society, at 480-965-6224.

An innovative partnership between ASU and the Heard Museum in Phoenix is giving Native American students the opportunity to gain professional experience before they graduate by interning at the museum.

An innovative partnership between Arizona State University and the Heard Museum in Phoenix is giving Native American students the opportunity to gain professional experience before they graduate by interning at the museum.

ASU graduate student Mahalia Newmark is one of three students selected for the internship this spring. She has spent at least 10 hours a week planning events, learning about educational program development and delivery, and networking as part of her internship. 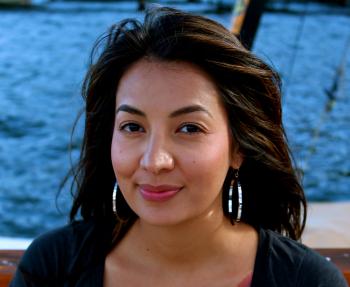 “I’ve always known I’ve had a love and passion for the arts and culture and education, and when this internship came up it was the perfect opportunity for me,” said Newmark, who is pursuing a master’s in public administration with a concentration in American Indian studies.

The Heard Museum Guild, the volunteer wing of the Heard Museum, partnered with ASU’s American Indian Student Support Services on creating these paid internships to help retain Native American students at ASU and give them hands-on experience in a project-based environment at the museum.

Newmark, a citizen of Tulita Dene (First Nation), is working as the education and public program intern. After graduation, her dream job is to work at a Native cultural institution like the Heard Museum that is dedicated to Native American arts and cultures.

“I love it,” Newmark said. “I love the opportunity to be a part of a place in Phoenix that has supported Native people for so long and that really supports Native artists and students and is really committing to conveying the culture in a sensitive and appropriate way.”

It is hoped that the pilot internship program this semester is the first of many, according to Laura Gonzales-Macias, assistant director of ASU’s American Indian Student Support Services (AISSS).

“This partnership is aligned with what with AISSS stands for and the vision that American Indian students graduate to become contributors to themselves, their family and their community,” Gonzales-Macias said. “The combination of pay and professional development and learning that we can provide our students goes to the value of ultimately contributing to their families.”

Truman Peyote, an ASU graduate student majoring in English literature with an emphasis in American Indian writing, is the curatorial and collections intern at the Heard Museum.

Before the internship, Peyote, a citizen of the Chickasaw Nation, already had a deep interest in the American Indian culture and volunteering in a space that would allow him to work hands-on with exhibits.

“The ability to see American Indian people that span generations and age and culture and tribes come together as if they are just family, and that’s pretty unique and crazy and that’s really personal for me,” Peyote said.

Peyote said he feels the responsibility as one of the pilot students in this partnership to excel in his work and represent ASU and AISSS to the best of his abilities.

“I would hope that the experience is going to be so great on both ends of the spectrum that I hope the Heard Museum will be super impressed by me and others and I know that I am already thinking how great it is, and maybe if those two things are in convergence then we can do it again,” Peyote said.

In addition to the paid-internship aspect of the program, the students participating may also earn class credit towards their respective degrees.

ASU senior Isaiah Nelson, a citizen of the Navajo Nation, is earning three credits for his internship.

Nelson, the marketing and public relations intern for the museum, is majoring in museum studies and earning a minor in American Indian studies.

“Going to ASU and especially going to the downtown campus, when I talk to ASU professors and mention the Heard Museum, their eyes light up and they say, ‘Wow that’s such a good museum and opportunity,’ ” Nelson said.