A team of researchers from Arizona State University has found that releasing excess heat from air conditioners running during the night resulted in higher outside temperatures, worsening the urban heat island effect and increasing cooling demands.

“We found that waste heat from air conditioning systems was maximum during the day but the mean effect was negligible near the surface. However, during the night, heat emitted from air conditioning systems increased the mean air temperature by more than 1 degree Celsius (almost 2 degrees Fahrenheit) for some urban locations,” said Francisco Salamanca, a post-doctoral research scientist at Arizona State University’s School of Mathematical and Statistical Sciences. 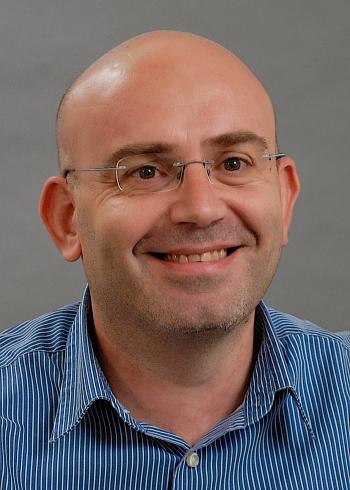 The research is presented in the paper, “Anthropogenic Heating of the Urban Environment due to Air Conditioning,” published in the March 6 issue of Journal of Geophysical Research Atmospheres.

The research is funded by a grant from the National Science Foundation, Multiscale Modeling of Urban Atmospheres in a Changing Climate, with principal investigator, Alex Mahalov.

The paper focuses on the anthropogenic contribution of air conditioning systems on air temperature, and examines the electricity consumption for the rapidly expanding Phoenix metropolitan area, one of the largest metropolitan area in the US. Phoenix is located within the semiarid Sonoran desert and because of its harsh summertime conditions makes considerable use of air conditioning systems.

To keep people cool, air conditioning (AC) systems can consume more than 50 percent of total electricity during extreme heat and put a strain on electrical grids. Cooling demands for rapidly expanding urban areas like Phoenix are likely to increase considerably during the next several decades. To address future energy needs in a sustainable manner, the researchers determined it was essential to study current AC demand and assess AC waste heat.

For this investigation, researchers used a physics based modeling system to evaluate the impact of heat emission from air conditioning systems on air temperature. This physically based dynamic approach has the advantage of taking into account both urban scenarios, such as the size and shapes of buildings, and climatic factors, such as temperature and wind speed, when the energy consumption is calculated. This approach is necessary given the inherent feedbacks associated with AC systems. For example, hot summer nights will lead to increased air conditioning demand, which in turn will output additional waste heat into the environment, leading to further increase in AC demand, resulting in a positive feedback loop.

The authors simulated a 10-day period, covering ten extreme heat days from July 10 to 19 of 2009. They used the non-hydrostatic version of the Weather Research and Forecasting (WRF) model coupled to the Noah land surface model to analyze the contribution of AC systems on air temperature. To evaluate the ability of WRF to reproduce the near-surface climatology, eleven weather stations maintained by the National Weather Service and the Arizona Meteorological Network were used.

“Our work demonstrates one Celsius degree (almost 2 F) local heating of urban atmospheres in hot and dry cities due to air conditioning use at nighttime. This increase in outside air temperature in turn results in additional demands for air conditioning," Salamanca said. "Sustainable development and optimization of electricity consumption in cities would require turning ‘wasted heat’ from AC into ‘useful energy’ which can be utilized inside houses for various purposes including, for example, water heaters. Implementing this mitigation strategy would achieve several objectives: successfully reducing the urban heat island temperature by one-Celsius degree at night, reducing AC electricity consumption on a city scale and providing a real example of urban climate mitigation.”

With regard to economic impacts, it is estimated for the Phoenix metropolitan area that successfully reducing the urban heat island temperature with this strategy would result in at least 1200-1300 MWh of direct energy savings per day alone.

According to the US Department of Energy, summertime extreme-heat days are projected to become more frequent and intense as a result of climate change, presenting significant challenges for the energy sector and electric grid. Reliable methods are needed for forecasting energy demands that can help to inform and assist in the future planning of sustainable energy needs of rapidly growing urban areas.

ASU archaeology professor Michael E. Smith has received an Excellence in Diversity and Inclusion Award in the academic professional/faculty category for creating a sanctuary of learning for all of his students.

“When you have life experiences where you are often treated differently because of some aspect of your identity, a place where you are treated equal to everyone else – and that treatment is positive – is a sanctuary.”

Those words from Arizona State University anthropology graduate student Juliana Novic speak to the spirit and value of the ASU Committee for Campus Inclusion’s Excellence in Diversity and Inclusion Awards. 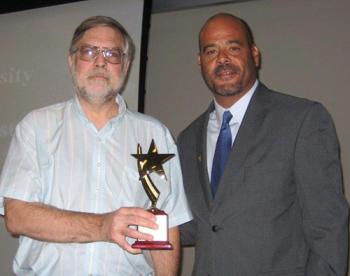 Novic nominated her faculty advisor, Mesoamerican archaeologist Michael E. Smith, for creating a sanctuary of learning for all of his students. Last month, Smith accepted the 2014 award in the academic professional/faculty category at a breakfast ceremony on the Tempe campus.

“Mike treats everyone with the same respect and offers everyone the same opportunity,” Novic says. “The only thing that matters is your interest and education. Your social status, position, gender, race, ethnicity, religion, sexuality, age, immigrant or disability status doesn't matter or impact how you get treated or what opportunities you are offered in his research lab.”

Smith, a professor in the School of Human Evolution and Social Change in the College of Liberal Arts and Sciences, is known for his dedication to his students and for offering undergraduates and graduates alike field, lab and classroom experiences that build skills and boost résumés.

Former Smith student and advisee Jeanette O’Neil-O’Callaghan said that she is impressed by the diversity of Smith’s undergraduate and graduate students, as well as the fact that Smith fosters open and honest dialogue.

According to her, “All points of view, regardless of academic level, are encouraged in his lab and classroom.”

She adds that Smith goes above and beyond to help his students find their own scholastic paths without forcing his own preferences on them. He also encourages them to read widely and get to know as much as possible about the world and its peoples – past and present.

When O’Neil-O’Callaghan moved on to the art history program at ASU, Smith offered her an available desk in his lab and continued to include her in discussions with current students.

“Dr. Smith knows implicitly that archaeology does not exist in a vacuum. It needs the input of many diverse fields and people to accomplish its goals and advance its course,” she explains. “He didn’t care that I was no longer a student in his school. I was an Aztec scholar in training, and my point of view was welcome.”

Novic is proud of Smith’s win and the message it sends. “I think it is important for our school that one of its faculty was honored for something meaningful like this,” she says.

The recipients of the ASU Committee for Campus Inclusion’s 2014 Excellence in Diversity and Inclusion Awards are: