Let’s face it – everywhere we turn we are surrounded by popular culture. Whether it is on TV in a coffee shop, magazines in a grocery store or music on the radio, we just can’t seem to get away from it.

This realization has caused Project Humanities at Arizona State University to ask: Is pop culture a direct representation of the views of society? 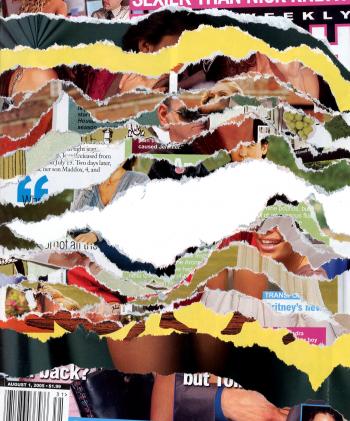 To answer this, we must first define popular culture. At its most basic level, popular culture is a collection of ideas, values, actions, goods and services that can be bought and sold to the mainstream masses. High-level industry professionals and celebrities generally deem these goods as valuable in magazines and on TV, which increases sales and worth.

Joseph Benesh, director of the Phoenix Center for the Arts, shares his opinion about this process.

“There are hundreds of magazines that sell only pop culture, e.g. the Vogues, GQs, People, teen mags. People are spending money to be brainwashed on where to spend their next dollar and pay more for whatever that is. It's genius,” he said.

Under this psychology, society is, in turn, creating a culture that expresses our deepest yearnings and desires. Matthew Whitaker, director for the Center for the Study of Race and Democracy at ASU, weighed in on the phenomenon.

“It’s interesting, because in doing this, pop culture often becomes a manifestation of what we want. Sometimes, however, what we want isn’t good for us,” he said.

Characteristics of race, class and gender are often constructed on television shows to help us understand who we are as people. Sexuality has become a topic due to artists like Miley Cyrus and Lady Gaga. It’s unclear, though, whether these artists are expressing their creative freedom or are pawns in the media machine.

“In some ways Miley is a genius because she knew that in order to succeed exponentially and be accepted by adults, she had to kill Hannah Montana. Cyrus had her career in mind, not necessarily her art,” said Whitaker.

“Most people would argue that someone like Kelly Clarkson is a great vocalist, but she won’t give you the drama. Whether you view it as a train wreck or the evolution of an artist, we as a society, for better or worse, gravitate toward spectacle.”

As society moves toward a more progressive and accepting outlook, executives are looking for ways to use music and TV as a means for change. Whitaker applauds "Modern Family" for the way that comedy is used to portray these ideas in a positive light.

“I see this as an educational tool that allows us to be taught through humor," he said. "Humor can be disarming if it is done right. We are in the midst of a massive movement to challenge us to think differently by using pop culture in subtle and non-subtle ways.”

Some would argue that this movement has created information overload.

“In my home we don't have network TV or cable, just an online streaming provider," says Benesh. "So my exposure to the mainstream is pretty much just my online account. To anyone who's reading this: remember you have choices of what to buy, where to buy it and what to watch. Turn off your TV for one year and it will change your life forever.”

Others, like Whitaker, feel that society should not dismiss it categorically.

“It can be a beautiful representation of the human experience," Whitaker says. "There are so many wonderful things in pop culture that can feed the mind, heart and soul – like spoken-word poetry, dance and uplifting religion expression that can engender positive change within us. Ignoring it could cause you to miss out."

What do you think? Join the conversation on the Project Humanities Facebook page.

Arizona State University, the Phoenix Public Library and the City of Phoenix will celebrate the grand opening of the hive @ central, the newest location in ASU's Alexandria Co-working Network.

The event is free and open to the public, and is scheduled to take place from 2 to 3 p.m., Jan. 17, at Burton Barr Central Library. To RSVP, visit hiveatcentral.eventbrite.com.

The Alexandria Co-Working Network is an ASU initiative that brings people together in collaboration spaces in public libraries across Arizona. The new space at Burton Barr Central Library will support the entrepreneurs, inventors, problem-solvers and small-business owners across the Valley who need help to advance their ideas but don’t currently have access to the necessary tools.

Named for the world’s first library in Alexandria, Egypt, the initiative, which is led by ASU's Entrepreneurship and Innovation Group, is designed to create a statewide network of places for people to connect, collaborate and find valuable resources. The spaces, which are free and open to the public during normal library hours, provide access to co-working space, as well as resources that people can use to move their ideas forward, including:

• physical and digital assets from the libraries