Kathleen “Kassie” Lamp is not your stereotypical English teacher.

Instead of holing up in a library, she goes on archaeological digs. You can’t find her hanging out at the Globe Theatre in London – she’s in Rome, studying art. And while she certainly respects the written word, she’s on a quest to legitimize visual media – art, sculpture, and architecture – as a form of communication. 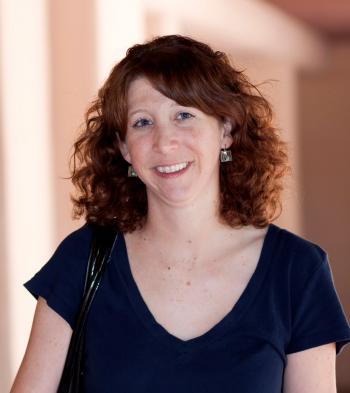 An assistant professor in the Department of English, College of Liberal Arts and Sciences, Lamp challenges the boundaries of her field – historical rhetorical studies – by arguing that visual media is and was an important persuasive device. Lamp’s goal is to gain new insight into the past by examining this previously unrecognized method of rhetorical strategy.

Many are familiar with the concept of “rhetoric” as it was practiced in Ancient Greece.  While not exactly household names, Socrates, Plato, and Aristotle are recognizable as rhetoricians, their legendary oral debates and writings accepted as record of political and cultural values of the time. Lamp suggests that the art and architecture of ancient Rome functions in the same manner as these canonical writings.

“We have fundamentally misunderstood the early Roman empire by not seeing the visual as rhetorically important,” Lamp explains.

Lamp’s ground-breaking paper on the topic, “Imitation and Parody: Rhetorical Theory and Augustan Rome” received the top paper award from the American Society for the History of Rhetoric in 2011.

Lamp will give a presentation from her paper at the November 2011 National Communication Association Convention.  In 2010 she also received a top paper award in the Visual Communications division.

Lamp’s paper is part of her current book project about the Augustan age. Augustus, the first emperor of Rome and the adopted son of Julius Caesar, helped lay the foundations for the rise of the Roman Empire.

Lamp suggests that while unpopular, Augustus’ reign could not have been very tyrannical because Roman citizens were comfortable having art openly mocking Augustus in their homes. According to Lamp, “models of citizenship were chiefly conveyed to the populace through visual and material rhetoric – and then the populace could reject that.”

Interested?  Lamp is currently preparing her manuscript for publication and will also be teaching rhetorical studies in the spring 2012 semester.

ASU head coach looks ahead to big conference match-up against the Bruins.

ON UCLA:
“UCLA has a lot of talent on their football team. They totally dominated that Cal game, which Cal is an awfully good football team. They have a lot of talent. They’re good on defense and offense, when they get the ball running. (Kevin) Prince is playing extremely well right now. I think he ran for 170 yards last week. If they can run the football, they can create a lot of problems for you. They eat the clock up; they forced some turnovers last week against Cal. They’ve been talented all year. They’re sitting there in a situation, like us, where they have a chance to win our division. They have to beat us to do it. On the road, it’s a real important game for all of us. “

ON ASU PLAYERS BEING FROM SOUTHERN CALIFORNIA:
“I think it can be a distraction if you let it be. We won’t let it be because we’re not going down there in time for it to be a distraction. We understand what’s at stake. Every time we go to L.A., we get in there a little later. We’ve played pretty well down in Los Angeles for the most part, other than against them two years ago. I think it’s a positive because our players get a chance to go down and play in front of their friends and families.“

ON Clint Floyd:
“Clint is having a good year. He’s tackling better. It’s a matter of having played and being a senior and having experience and seeing different things in different situations. That’s how it is with a lot of our senior group that have been the leaders of our football team, and Clint is a prime example. I know he’s excited like all of those guys from L.A. to go back home. He’s played well, interception-wise. He’s an outstanding athlete. He has a good feel for the game. He’s tackling well, so he’s having a good year. “

ON DEVERON CARR’S INJURY:
“I don’t have anything on Carr right now. He’s not cleared to practice now, so we’ll see how it is tomorrow. In talking with our trainer, I feel like he’ll be okay.”

ON THE UCLA FILM:
“They have tremendous athletes. They have two great running backs in (Derrick) Coleman and (Johnathan) Franklin. (Kevin) Prince has been playing real well. Their offensive front has been playing for a while. They have all of their receivers back this week. They play well. I have a great deal of respect for Rick (Neuheisel) and the things he has gone through and for those guys to step up like they’ve stepped up after that tough game against Arizona. They played a great Cal team and won it convincingly. As I’ve said, they have good football players. We’re going to have our hands full. Defensively, they run around, they’re down four. They’ve got seven or eight guys that play that have been heavily recruited—we tried to recruit some of them ourselves. They’ve got talent and they’ve got confidence now, and they’ve done a great job in keeping a flow in where they’re at right now. If they beat us then they’re ahead of us in the division. That’s what it boils down to. “

ON KEVIN PRINCE RUSHING AS MUCH AS HE DID IN THE CAL GAME:
“That’s a read. It’s what they do offensively. It’s triple option football is basically what it is. They’ve got ways to get him out that are called, but they also have ways that if he reads certain things, then he’s going to keep the football and he did an extremely good job of it last week against Cal. That’s a big part of their offense is running the football. “

ON Junior Onyeali:
“(He looked) rusty, but he was healthy. You think you’re in shape, but you’re not in shape until you start playing. He made some plays, but like I said, he hasn’t played for a long time. He’ll be better this week. “

ON YOUNGER PLAYERS PLAYING IN THE COLORADO GAME:
“I thought at linebacker, Anthony Jones played to the expectations that we had for him ever since he got here. I thought he did a real good job. I thought the second group in the offensive front did some good things. Obviously, the quarterbacks were limited as to what they could do, so it’s kind of hard to tell. The biggest thing is that they had an opportunity to play. That’s the most important thing. They bust their rear-ends off all the time. We were fortunate enough to get a lead. I’m a real believer in that. A lot of guys will keep their guys in until the end. I don’t believe in that. I believe in those guys getting better all of the time. That helps them get better. Playing in a quarter of a game is probably better than playing in all of spring ball, experience-wise. “

ON Evan Finkenberg:
“He’s got a chance to be back. Our plan really is he’ll be a backup. We’ll start (Dan) Knapp and Aderious (Simmons) and, hopefully, he’ll be able to come in if something were to happen or if we decide to play him.”

ON BEING BOWL-ELIGIBLE:
“Obviously, that’s the first goal of many that we’re trying to achieve this year. It’s kind of not even in my mind to be honest with you. We have our goals set and what we want to accomplish. Being bowl-eligible is being bowl-eligible, that’s good. That’s the first one. We have other goals that we’re trying to reach that are very important to us right now. “