Building a concrete canoe might seem counterintuitive. But the Concrete Canoe Competition between college engineering teams is a time-honored test of design, technique and creativity, using construction’s most ubiquitous material.

ASU’s team from the School of Sustainable Engineering and the Built Environment, one of the Ira A. Fulton Schools of Engineering, is in the midst of building this year’s canoe for the April 3-5 competition in San Diego. 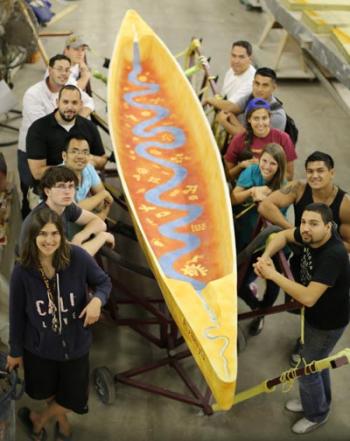 “The competition measures many facets of aesthetic and design,” said Chris Lawrence, a lecturer at the school. “The canoe has to look good. It has to float, even when swamped with water, one of the tests, which is hard when it’s made out of concrete. And then they have to race it.”

The competition, sponsored by the American Society of Civil Engineers, is designed to promote the dynamic and innovative profession of civil engineering, as well as raise awareness of the versatility and durability of the material used to make our sidewalks, home foundations, buildings, bridges, roads and dams.

Kamil Kaloush, an associate professor at the School, is a second faculty adviser, and engineering alumni Derek Boland and Steven Gojic are practitioner advisers.

The scoring captures all job skills students will need, including design, construction, and technical and oral reports, Lawrence said.

“The competition really puts it all together,” he said. “It’s intense, difficult and rewarding.”

Since then, there have been yearly gatherings. ASU has participated for more than 14 years, and about 10 years ago, hosted the competition on Tempe Town Lake.

The competition is billed as a practical application for the skills students are learning in class.

But Miriam Woolley, this year’s co-captain, did it backwards, working on the team as a freshman, before she had taken any civil engineering courses.

“I didn’t know anything about concrete or its properties, but I learned about additives, aggregate and curing,” Woolley said. “So when it came up in class, I really understood it.”

Woolley, who grew up in the small town of Concho in northeastern Arizona’s White Mountains, is now a junior majoring in civil engineering and a recipient of the Arizona Society of Civil Engineers scholarship. This year, she is second in command for the team headed by senior Eric Johnson. Next year, Woolley will be in charge.

Her long-term dream is to work for NATO, designing pavement for aircraft carriers. She’s not sure if she’ll try to go directly into a job after graduation, or if she’ll first pursue a master’s degree.

“I want to travel, and a lot of companies, like Kiewit Corporation, will have you work at a mining site in the Midwest, then send you to Toronto for a new project. I’d love to do that, at least for awhile.”

She said it’s been great being a female in a mostly male environment.

“There’s a lot of girls out there who are awesome engineers,” she said, pointing out Mackenzie Hagan, who is in charge of aesthetics for this year’s canoe competition. “She is so creative and organized. She knows exactly what to do.

“When I was a freshman, I was the only girl at a conference I attended,” Woolley said. “It made me feel special. I feel like I’m paving the way for others coming after me.”

Woolley will paddle in the races for the first time, and has been building up her muscles traversing Tempe Town Lake with a previous year’s canoe.

“I’ve been practicing since December,” Woolley said. “I’ve never paddled a regular canoe, but I have to think it would be easier than a concrete one. This seems like it is a lot harder because of how heavy it is. It’s not easy to steer.”

Constructing the canoe is a big job, and about 30 people showed up for “the pour,” augmenting the team of 10 regulars.

The 3-foot-wide, 20-foot-long canoe will weigh between 150 and 200 pounds when finished. It doesn’t fit in the curing chamber at the Interdisciplinary Science and Technology Building 2, so it sits outside, with team members regularly spraying it with water to keep it constantly damp.

Recently, the team unwrapped the canoe to apply a finishing layer, one that doesn’t include any fibers and leaves a cleaner surface to stain and eliminating drag in the water.

They measured and mixed the concrete and spread it across the canoe with trowels, taking samples in different areas to ensure a uniform thickness. Then they smoothed it with their palms.

This year, ASU’s team chose Arizona as a theme, and will stain their canoe with a design of a Native American water spirit. The display table and canoe stands will also reflect the theme.

“I’ve learned a lot of things about civil engineering, but this year, I’ve also learned about being a leader,” Woolley said. “I’m learning the responsibility of being the last person in line, that if you’re not doing the job, the project won’t get finished.”

Information sessions on the Tempe and Downtown campuses will introduce the nationally-recognized Preparing Future Faculty program for graduate students thinking about finding a faculty position.

Arizona State University Graduate Education will host information sessions on the Tempe and Downtown campuses, April 7 and 10 to introduce you to the nationally-recognized Preparing Future Faculty program at ASU. 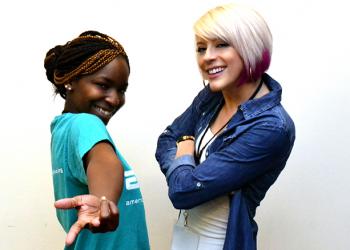 Preparing Future Faculty (PFF) is a professional development program and interdisciplinary for-credit seminar class that allows students to explore the many roles of a faculty member. It is open to doctoral and master of fine arts students, as well as postdocs.

Faculty and administrators provide an inside look into the world of higher education, including research, grant writing, how to be successful in the profession and how faculty roles differ at various types of institutions, from large public research to small private colleges.

“What PFF has done for me is give me the tools that I need to become a faculty member at the collegiate level,” says Chareka Daniel, who is earning a master of fine arts degree in dance from ASU’s Herberger Institute for Design and the Arts. “It has provided the resources I need to prepare for graduation, like writing skills, resume and CV-building, and how you market yourself when you’re looking for a job.”

For more information on the program, visit: graduate.asu.edu/pff.

View the event flyer. The info session will include light refreshments. Registration: asu.edu/gcregistration.