Nikhilesh Chawla and Nongjian Tao are members of separate research teams that recently earned grants from the Air Force Office of Scientific Research through the U.S. Department of Defense Multi-University Research Initiative (MURI). Chawla is the Fulton Professor of Materials Science and Engineering in the School for Engineering of Matter, Transport and Energy, one of ASU’s Ira A. Fulton Schools of Engineering. Tao is a professor in Fulton Engineering’s School of Electrical, Computing and Energy Engineering, and director of the Center for Bioelectronics and Biosensesors at ASU’s Biodesign Institute.

Chawla will work on a project to develop advanced methods of predicting the onset of cracking and other damage to the primary materials used in the construction of military aircraft and sea craft. The team will also seek ways to improve the resiliency of the materials.

The MURI grant provides $7.5 million for the five-year project. ASU is to be allotted $1 million.

When final funding figures are approved, the MURI grant for the entire project could provide as much as $12.5 million over five years for the project. ASU may be allotted as much as $1 million. Competition for MURI grants is intensive, with multi-university teams of members from the science and engineering programs of leading research institutions typically vying for support.

Chawla’s role on his team will involve quantifying how and where fractures and other forms of material degradation originate at the microstructural level. He’ll use advanced X-Ray tomography to get a microscopic view of the characteristics of materials behavior, a method designed to yield information on which to base mathematical predictions of when and where materials will incur damage under varying conditions.

The focus will be on the kinds of metal alloys used for military vehicles and equipment, and other defense-systems hardware. The work will be done in Chawla’s 4-D Materials Science Laboratory, a facility operated under the umbrella of ASU’s Security and Defense Systems Initiative (SDSI).

Chawla has extensive experience doing materials research for defense systems. He has worked on projects funded by Department of Defense programs to develop advanced methods for protecting military ships and other craft from corrosion and other types of damage due to environmental and battlefield impacts.

The research is designed to reveal new knowledge of the spatial aspects of electron-transfer dynamics in real time on the nano-scale. Advanced understanding of those dynamics can help enable development of improved chemical analysis, sensor technology and electroplating processes (used to create metal coatings for corrosion-resistance), as well as more effective energy and fuel devices.

Tao’s work for the project will be performed in his Center for Bioelectronics and Biosensors. Electrical engineering post-doctoral research associate Xiaonan Shan will assist Tao, along with two graduate students.

The Pac-12 has released its annual video highlight preview of the upcoming football season.

The Pac-12 has released its annual video highlight preview of the upcoming football season.

The video highlights all Pac-12 schools and harnesses the intense competition exhibited by all of the conference schools. 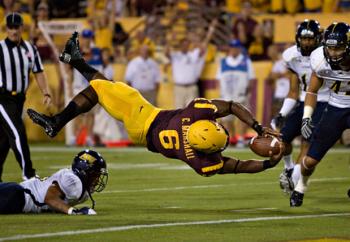 “The universities we are allied with are just as intensely focused on the competitive success of their knowledge enterprises and their athletic teams,” says ASU President Michael Crow. “This competitiveness and its spirit of ‘do your best’ is an important ingredient for our overall success here in Arizona and around the country.”

To watch the video, vist thesundevils.com.