Professor Richard Farmer, who taught electrical engineering at Arizona State University for most of the past 45 years and was elected to the National Academy of Engineering, died at his home in Phoenix on March 26.

“Professor Farmer was a tireless contributor to our electrical engineering programs and the electric power industry for more than four decades. During his service at ASU, he made a positive impact on thousands of our students,” said Stephen Phillips, a professor and director of the School of Electrical, Computer and Energy Engineering, one of ASU’s Ira A. Fulton Schools of Engineering. 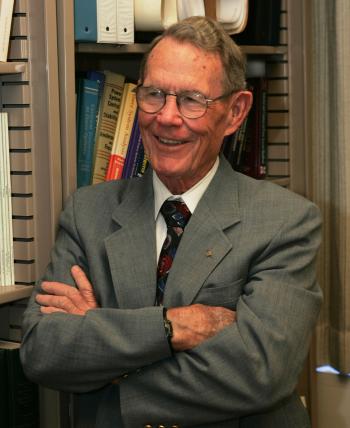 A U.S. Navy veteran, Farmer earned his master’s degree in engineering from ASU in 1964. The next year he began work at Arizona Public Service Co. (APS), the state’s largest electricity utility company, where he would eventually become principal engineer.

In 1966 he began teaching one course each semester at the university. After retirement from APS in 1994, having spent almost 30 years with the company, he began teaching additional courses and later attained full professorship.

In his time at APS, Farmer led projects that developed technologies to improve the efficiency and reliability of electrical power generation and transmission systems.

He was elected to the National Academy in 2006. The honor is among the highest distinctions in engineering, as it recognizes outstanding contributions to engineering research and education, advancement of engineering fields and pioneering of new technology.

In 1986 Farmer was elected to the status of Fellow of the Institute of Electrical and Electronics Engineers (IEEE), the world’s largest professional association for the advancement of technology.

In 2007 the IEEE’s Power Engineering Society gave him the highly prestigious Charles Concordia Power Systems Engineering Award for “innovation in the development, analysis, measurement and mitigation techniques for subsynchronous resonance and leadership in the area of power system dynamic analysis.”

Subsynchronous resonance was a problem for electric utilities in the early days of series compensated transmission lines. Farmer “was one of the core group of investigators who recognized, explained and provided solutions,” said his APS colleague Douglas Selin.

Farmer wrote and co-wrote several books and other publications on power systems engineering, and was a sought-after conference speaker.

He also was a valued mentor to both students and younger colleagues.

ASU associate engineering professor Dan Tylavsky recalled how Farmer drew on his decades of industry experience and “breathed life into a wide range of courses with extremely technical and intricately complex subject matter. And invariably he has inspired students by creating vivid images from lifeless content.”

Farmer brought “a rare blend of academic excellence and wealth of industry experience” to his teaching, said former student Siddharth Suryanarayanan, now an assistant professor of engineering at Colorado State University. “He truly left a deep impact on his students. His mentoring led many of them to success.”

“It was not unusual for students to be in his office at all hours to seek practical advice on a homework assignment, a thesis, or just for advice on a job offer,” Heydt said.

Farmer’s devotion to students and their esteem for him, Heydt said, was expressed poignantly in a note left with a bouquet of flowers outside Farmer’s door shortly after news of his death. It read: “Thank you Professor Farmer for showing me what kind of man I really want to be.”

An ASU team is vying for a place in the world's premier student technology competition.

A team of four ASU students is headed to Seattle, April 20, to compete in the Microsoft Imagine Cup U.S. finals, which is a step away from the Imagine Cup Worldwide finals – the premier international student technology competition.

The FlashFood team will be among 10 teams competing in the Design Software category. Another 12 teams are finalists in the Game Design category. Hundreds of teams from throughout the United States vied for a place in the Imagine Cup finals. 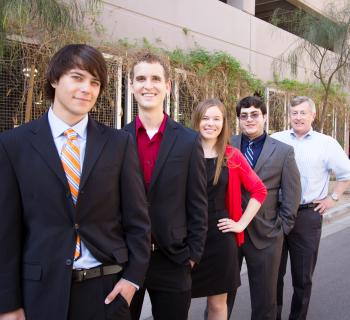 The team is forming a network of restaurants and banquet halls to donate leftover and surplus food to Flashfood operations, which would then take it to drop-off points at or near local community centers, churches and schools for distribution to families and individuals.

The students are working on a mobile-phone application to help manage their food pickup and distribution system. The app would be used for communications between the providers, collectors and recipients of the food.

The Flashfood project’s goal is to operate every day of the week, particularly on evenings when conventions, parties and other events may have available food that would otherwise be thrown away, Lehnhardt says.

Flashfood's leaders are also organizing a training program for other student volunteers to participate in the service.

“Most of us have worked in the food industry and have experienced the frustration of having to throw away perfectly good food,” Lenhardt says. “We are serious about the impact we think our idea can have in multiple communities.”

“We are not aware of anyone else in the United States doing this,” Filley says. “FlashFood is using technology to connect multiple people in a short amount of time to fill a niche in the hunger landscape that no one else is addressing.”

The Imagine Cup competition challenges students to use technology to develop innovative solutions to some of the world’s biggest problems. The competition began in 2003 with about 1,000 students working with various teams. Last year more than 358,000 students from 183 countries and regions around the world participated as part of teams trying to move through the stages of the competition.

At the U.S. finals, the top four teams in each of the two categories will win prize packages that include funding to support their ventures. First-place winners in each division will move on to the Imagine Cup Worldwide finals in Sydney, Australia in July, plus receive additional funding for their projects.

“It’s gratifying that an issue that is important to us, and a solution we think will make such a difference, is important enough to others that they would be willing to give us this opportunity,” Lehnhardt says.

Competing in the Imagine Cup U.S. final will give Flashfood members motivation to more thoroughly develop their plan and articulate their goals, he says, and will help publicize the project to the local communities in which they hope to establish their system.