John W. Reich, an ASU emeritus professor of psychology, recently published his second book, “Radical Distortion: How Emotions Warp What We Hear,” which focuses on research surrounding the decision-making processes of those who endorse extreme beliefs. The book seeks to make “a crucial first step toward creating a more civil society in which the value of a wide spectrum of views can be considered and appreciated.”

In a recent email interview, Reich discusses his background, the subject of his new book, and how Americans might benefit from this research. 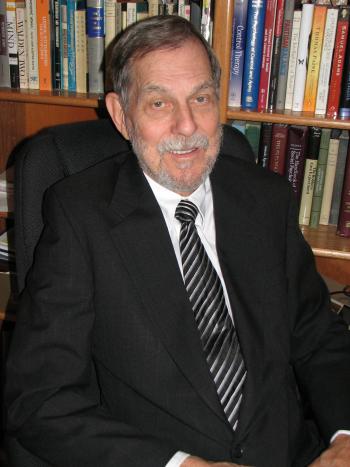 Q: Tell me a bit about your background, and how that brought you to this topic.

A: My professional specialty is social psychology, which I taught in the ASU Psychology Department for 41 years before retiring a few years ago. The book summarizes some of the major theories and research findings in social psychology, applied to the issue of social divisiveness, hostile intergroup attitudes, and cognitive distortions as seen every day in our polarized and hostile American public discourse (and around the world as well, unfortunately).

Q: What was your primary motivation for writing this book?

A: [I wanted] to bring to the public’s attention a body of tested and reliable research information on biases in human communication processes; the biasing of our communications lies at the very core of this society’s divisiveness. I did my undergraduate and graduate doctoral training with the founders of this field of research within social psychology, so I have firsthand experience working in the field.

Q: In your book, you talk about something called “toxic speech.” What do you define as “toxic speech,” especially in today’s world?

A: By “toxic speech,” I mean one of two classes of speech/communication. Some speech may be highly prejudiced and even extremist, but that represents no societal problem at all if someone is expressing their own stand on some hot-button issue (such as politics, religion, social issues). I call that type of speech “radical supporting speech,” because the speaker is supporting his/her own particular point of view. For instance, we expect Ford dealers to praise, even extravagantly, Ford cars. Ditto for insurance companies. Naturally expect people to claim superiority for what they believe. That may be noisy, perhaps irritating, but it is not a social problem.

But there is a second and much more dangerous form of hot-emotional advocacy, and that is when the radical speaker is attacking someone else’s beliefs. I call this “radical attacking speech.” An example would be what media people are calling “negative advertisements” when reporting on political speech, particularly during election time. The minute a “radical speaker” starts stating negative things about their “opponent,” then they will be attacked in turn, and then they will retaliate, and so on and on. To attack is to invite retaliation, as we see in hot-button issues. It becomes “toxic” because the entire realm of discussion and discourse becomes poisoned by attack, counter-attack, and retaliatory counter-attack. We are seeing our public discourse degraded by endless hostility in our communications because of the seemingly inevitable exchange of hostilities.

Q: You go on to say in your book that such radical speech can affect the public’s ability to form objective judgments. How does this happen?

A: This radical and hostile negativity is poisoning the public because such polarizing speech receives widespread coverage by the media. Research is showing that the public is not as polarized as the leaders of the public media and the political parties who thrive on polarization. But the extremism broadcast by the national media gets adopted by the individual exposed to it.

This occurs through what I call in the book “the endorsement process.” It is a step-wise process: The individual is exposed to radical speech by impressive, colorful and well-paid public media “experts” and becomes influenced by it.  Once they endorse that speech as their own, then they become “radical hearers” – my term for people who adopt the extremist opinions expressed by the public figures they want to emulate.

Q: It seems like the book is pretty timely, especially as the United States is leading up to an election. How can the nation benefit from the research that you present in this book?

“Radical Distortion: How Emotions Warp What We Hear” is available now from Prometheus Books at http://www.prometheusbooks.com/.

“The Activity of Sound” in Art

“The Activity of Sound” in Art

Artists affiliated with the ASU Herberger Institute School of Art and School of Arts, Media + Engineering, the ASU New College Interdisciplinary Arts and Performance program and invited guests will come together to honor legendary experimental composer John Cage.
This exhibition, partially funded by the City of Tempe, is a tribute to visionary American musician, writer, and visual artist John Cage on the 100th anniversary of his birth and the 20th anniversary of his death. 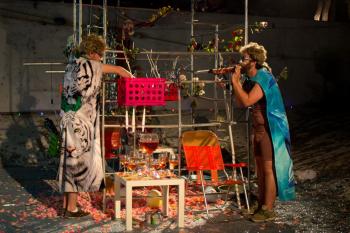 "When I hear what we call music, it seems to me that someone is talking. And talking about his feelings or about his ideas of relationships. But when I hear traffic, the sound of traffic—here on Sixth Avenue, for instance—I don't have the feeling that anyone is talking. I have the feeling that sound is acting. And I love the activity of sound [...] I don't need sound to talk to me."

Known for his pioneering use of chance operations in the production of art works, Cage’s work has been so influential on all of the arts, especially dance and the visual arts, that he is considered one of the forefathers of interdisciplinary and intermedia approaches. Although many of his most important works were completed more than 50 years ago, his ideas remain fresh and provocative. His continued influence is celebrated in this lively exhibition, which will close out a year of worldwide celebrations of the John Cage centennial.

The Night Gallery is a community outreach gallery displaying works by ASU School of Art graduate students, faculty and alumni that embraces the role a university can play in the off-campus community. Night Gallery is a constantly changing, 3,800 square-foot exhibition and experimental art space made possible through a partnership between Vestar Development Company and the Herberger Institute for Design and the Arts. Unique performances including music, dance, readings, theater and video also are staged at the Night Gallery.

The Night Gallery is located at the Tempe Marketplace, 2000 E. Rio Salado Parkway, Tempe, AZ. The gallery is on the west end and south side of “The District” between Barnes & Noble bookstore and Aeropostale. 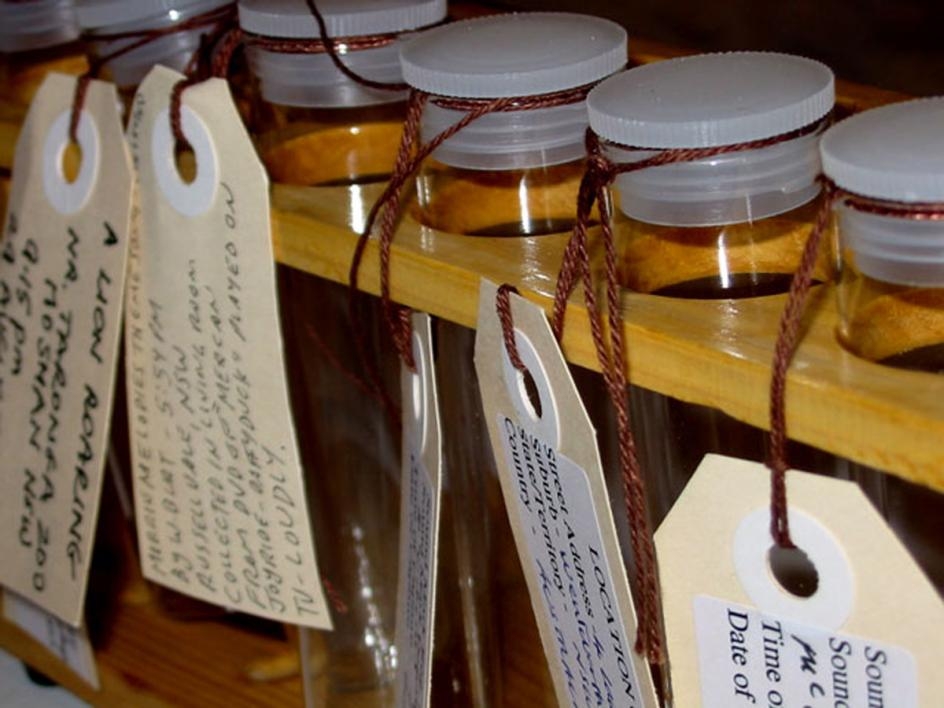 From Nov. 30 through Dec. 30, at the Night Gallery at Tempe Marketplace, see "Endangered Sounds," by Garth Paine, an art/sound project that first lists and then collects evidence of the presence of protected sounds. This picture represents some of the Sound Marks collected by volunteers. 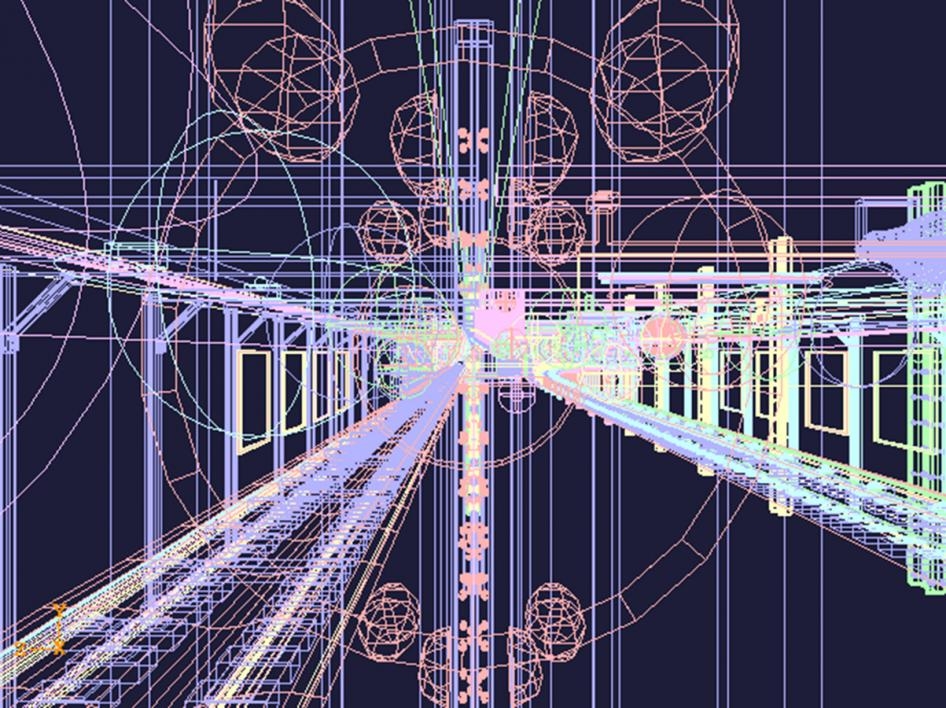 "Subway Sonata 3," by Muriel Magenta, is among the installations in “The Activity of Sound” exhibition. Still frame from the video depicting sound vibrations from wireframes of a 3-D animation.