Key discoveries were that delayed hospitalization increased the risk of death nearly threefold, and administration of antiviral therapy almost halved the risk.

The research team used data from a surveillance system created by the Mexican Institute for Social Security for the purpose of tracking the 2009 pandemic.

During the spring wave, Tamiful or Relenza was recommended to all clinic or hospital patients with influenza-like illness and severe symptoms or those with mild symptoms in high-risk groups.

Use of the antivirals dropped from 48.6 percent of confirmed cases in the spring wave to only 8.7 percent in the fall wave.

The case-fatality rate during the spring was 4.6% and fell to 0.7 percent in the summer. However, it jumped to 2.5 percent in the fall wave, when the use of antivirals was low.

According to the report, the drop in antiviral use during the fall may have been attributed to conservative administration of the drugs when the perceived severity of the pandemic diminished.

Chowell-Puente, an assistant professor in the School of Human Evolution and Social Change in the College of Liberal Arts and Sciences, looks at the connection of mathematical and computational models to real epidemic scenarios to make inferences on transmission dynamics and the effects of public health intervention strategies.

The April 2012 issue of meteorology's most prominent journal, the Bulletin of the American Meteorological Society, features ASU research on Phoenix's urban heat island as its lead story, and a second article by ASU researchers as well.

The April 2012 issue of meteorology’s most prominent journal, the Bulletin of the American Meteorological Society (BAMS), features ASU research on Phoenix’s urban heat island as its lead story, and a second article by ASU researchers as well. 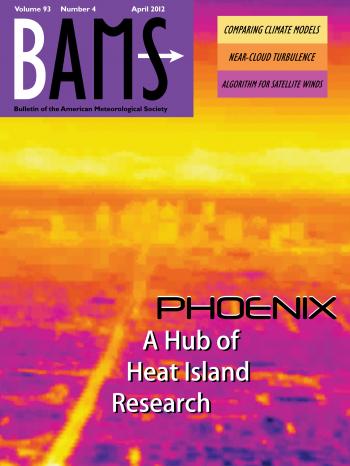 The article points out that research on Phoenix’s characteristics as an urban heat island (UHI) is more extensive than for other large US cities such as New York and Los Angeles, and asks “What factors motivated the development of UHI study in Phoenix?”

The question is answered by a comprehensive review of Phoenix UHI research, which demonstrates that that a strong partnership between ASU researchers, the National Weather Service and key stakeholders – private energy firms and municipal governments – has played a critical role.  Interdisciplinary study under the auspices of ASU’s Office of Climatology and the Central Arizona-Phoenix Long-Term Ecological Research (CAP-LTER) project has contributed significantly to theoretical understanding of the UHI phenomenon.  At the same time, the close partnerships with stakeholders have fostered successful implementation of several sustainable urban climate policies based on the research findings. The city of Phoenix’s Downtown Phoenix Urban Form Project provides one example of how research has informed municipal policy.  This study, carried out in the process of preparing a form-based code for downtown Phoenix, identified specific recommendations for addressing UHI mitigation and pedestrian comfort for the central city, and identified principles that could be applied throughout the metropolitan area and in other warm urban climates.

The second article authored by ASU geographers is “Seasonality in European Red Dust/“Blood” Rain Events,” by doctoral student Joshua White, Presidents’ Professor Randall Cerveny and professor Robert Balling Jr.  This research investigates the occurrence of “red rains,” relatively rare meteorological phenomena associated with Saharan dust being transported across Europe. After assembling an archive of these events that occurred throughout Europe, and looking at the season and conditions under which these events occurred, the authors found a climatic consistency to the seasonality and synoptic conditions in which red rains occurred. They point out that tabulation of events such as these “may provide a new gauge of climate change because of their past relative rarity.”

The Bulletin of the American Meteorological Society has a top impact factor rating in the field of meteorology and atmospheric sciences, a measure based on how frequently articles in the journal are cited.

Chow is currently a research fellow in ASU’s Department of Engineering, College of Technology and Innovation, and holds a concurrent appointment with the National University of Singapore’s Department of Geography. In addition to his affiliation with the School of Geographical Sciences and Urban Planning in the College of Liberal Arts and Sciences, Brazel is a senior sustainability scholar with ASU’s Global Institute of Sustainability.