A woman lies on the laboratory floor, knocked unconscious by an explosion. Alarms sound and warning lights flash as lab workers run to safety.  Sirens scream as emergency forces converge on the area. 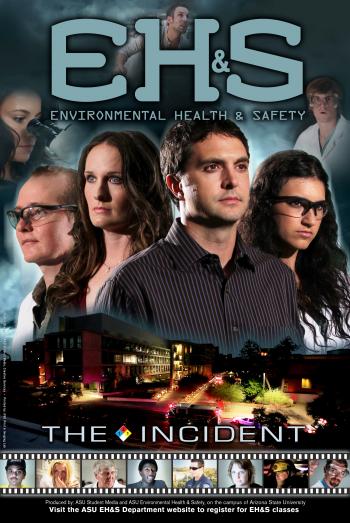 This is an opening scene from “The Incident,” a video produced, directed, written and acted by Arizona State University staff, students and faculty that recently earned an international award from the Campus Safety Health and Environmental Management Association.

The lab safety training film won out over numerous competitors for the association’s Solutions at Work Award. The award recognizes innovative ways for promoting interest at colleges and universities in developing better programs to solve or prevent safety problems.

The film now used in ASU’s laboratory safety training course conducted by the university’s Environmental Health and Safety (EH&S) department  presents a fictional investigation of a laboratory accident, imitating the popular genre of TV crime and detective shows such as the CSI (Crime Scene Investigation) series.

“Since we have re-engineered the lab safety class and have been using ‘The Incident’ as a teaching tool, we’ve seen a trend of finding fewer potential safety hazards during our lab inspections,” said Michael Ochs, ASU’s assistant director of occupational health and safety.

Ochs developed the idea of presenting the instructional film in a Hollywood style as a way to boost interest of participants in the safety course.

The project grew into a collaborative production led by the EH&S department and ASU Student Media,  involving students, faculty members, staff, campus safety personnel and members of the ASU Police Department and the Tempe Fire Department – all donating long hours of work to complete the project.

Ochs served as executive producer and co-wrote the script with Dan Dickson, production manager and creative director for ASU Student Media, and student Joseph Lao, who also directed the video.

LaBelle, one of the university’s safety compliance officers, also served as production assistant along with campus health and safety specialist John Crozier. In addition to handling acting roles, they helped co-ordinate props and campus filming locations.

A few dozen other students and staffers had supporting roles behind and in front of the camera.

“We wanted to give the students a learning experience, something to put into their portfolios that could give them a competitive edge in pursuing their careers,” Ochs said.

“This was a huge video project. It entailed months of production, shooting and editing,” said Jason Manning, director of Student Media.

“We put in a few 15-hours work days. A few times we worked until 2 a.m. because that was the only time we could get use of buildings and facilities,” Ochs said.

The production team had to navigate through regulatory requirements, such as obtaining numerous security clearances from university safety operations, police and the Tempe Fire Department to allow filming at various campus locations – including rooftops.

“It was one of the first big video projects our students ever did, and definitely still the most involved and difficult,” said Dickson, adding that Lao “really took the reins when it came to videography, direction and post-production.”

The film project team even gathered faculty research leaders, laboratory employees, students and campus safety staff for a focus group review of the film to ensure it met needs and expectations of the lab safety class students.

LaBelle said she got a taste of what big-time movie-making must be like.

“We spent so much time rehearsing and restaging scenes,” she said. “Plus all the attention to detail with props and sets that’s required takes a lot of effort.”

Manning noted the technical skills displayed by the student video team in staging an explosion, creating various special effects and staging a dramatic chase scene atop a building.

All the hard work paid off. Ochs said the video is now an integral part of ASU’s laboratory safety training and makes the course more effective.

Plus, it provided students who worked on the film with invaluable real-world experience, Manning said.

“Our students could not have received better training or a better project to include in their resumes,” he said. “This is the kind of thing that launches careers.”

The award for the film “recognizes the creativeness, dedication and collaborative spirit we have at ASU,” Ochs said.

"An Afternoon with the Tudors," on Aug. 20, at ASU's Tempe campus, will feature medieval swordplay, early modern artisans and English Renaissance intrigue as depicted by members of the ASU student chapter of the Society for Creative Anachronism.

The community is invited to an action-packed medieval event at Arizona State University from 11:30-5:30 p.m., Aug. 20. “An Afternoon with the Tudors” will feature medieval swordplay, early modern artisans and English Renaissance intrigue as depicted by members of the ASU student chapter of the Society for Creative Anachronism.

As part of the activities, a lecture on Tudor England and the wives of King Henry VIII will be presented by ASU history professor Retha Warnicke at 2 p.m. in the Pima Room of the Memorial Union on ASU’s Tempe campus. Warnicke was interviewed by Showtime for its hit TV series, “The Tudors.” Her expertise in Tudor England was called upon to give historical depth to the fictionalized series in an extra feature segment titled “The Tudors – Henry’s Wives Club.” Warnicke provided detailed commentary on the lives of Tudor women, Henry himself, and the court at large. In this televised interview, Warnicke revealed her well-published theories of the historical lives of Henry’s wives, especially that of Anne Boleyn. Her theories were built on and elaborated in her 1989 book “The Rise and Fall of Anne Boleyn: Family Politics at the Court of Henry VIII.” 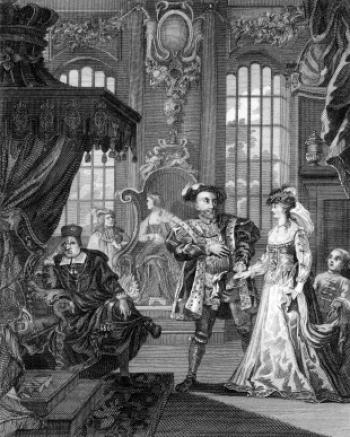 Warnicke has published several books and articles on Tudor women including three books featuring Anne Boleyn, Anne of Cleves, and Mary, Queen of Scots. Her most recent project is "Wicked Women of Tudor England: Queens, Aristocrats, and Commoners," which reveals how historians have validated negative gossip about Alice More, Jane More, Anne Boleyn, Katherine Howard, the Duchess of Somerset and the Countess of Leicester.

The Society for Creative Anachronism (SCA) is an international organization dedicated to researching and recreating the arts and skills of pre-17th century Europe with more than 30,000 members worldwide. Members experience the fun of creating and dressing in the clothing of the Middle Ages and Renaissance, while attending a wide variety of events including tournaments, royal courts, feasts, dancing, classes and hands-on workshops. The ASU student chapter of SCA is called the College of Brymstonne. More information about the chapter is online at http://www.brymstonne.org or email to Seneschal@Brymstonne.org.

“An Afternoon with the Tudors,” co-hosted by the Arizona Center for Medieval and Renaissance Studies at ASU, is free and open to the public. Activities will be held in the Memorial Union on ASU’s Tempe campus. Additional information is online at http://asuevents.asu.edu/afternoon-tudors.