Golan Bosnino has found his people. 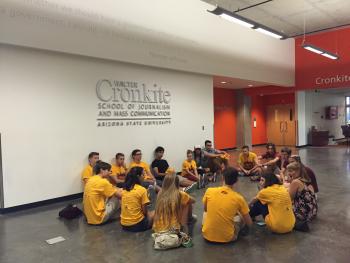 ASU journalism freshmen gathered for at the Cronkite School on Aug. 18 for an orientation in which they ate pizza and answered “Jeopardy!”-style trivia questions. Download Full Image

“A bunch of us stayed up until 2:30 a.m. talking about sports and journalism last night,” he said. “We’re all interested in the same things.”

It’s the benefit of being grouped with people who share your passions.

Bosnino, from Rancho Mirage, California, is a freshman living in ASU’s Cronkite Village at the Taylor Place dormitory on the Downtown Phoenix campus.

Cronkite Village is one of 32 residential colleges across the four campuses in which students live and learn together. Barrett, the Honors College, and Mary Lou Fulton Teachers College have “villages” on all four campus.

ASU’s residential-college model builds a sense of community among students who are studying the same major. The villages are also a place of refuge for frazzled freshmen, who are learning this week that they must lean on their community assistants as well as each other.

“You’re living with other folks who are suffering the same classes you are,” said Mary Cook, director of student success at the Walter Cronkite School of Journalism and Mass Communications.

Cook has been a parent figure for the past five classes of freshmen, soothing homesick students and reassuring frantic parents.

And while the Cronkite students are aiming for a career that requires toughness, they still need tender loving care.

More than half of Cronkite’s 247 freshmen are from out of state.

“It’s very hard for them. They’re far from home, and they get homesick,” Cook said. “So we work to keep them engaged. It’s a matter of connecting with them as human beings as opposed to a sea of faces.”

On Tuesday, the freshmen gathered for an orientation in which they ate pizza and answered “Jeopardy!”-style trivia questions.

“It really helps with study groups, and it’s a nice way to transfer that community from the classroom to the residence hall,” said Sarah Jarvis, a junior at Cronkite who is a community assistant for Cronkite Village.

Isaiah Wrinkle, a freshman from Bullhead City, is looking forward to getting academic help in Cronkite Village.

“We all have the same classes so it should be easy if someone needs help,” he said. “There’s always someone to talk to.”

Jarvis ran part of the “Jeopardy!” game with a team of freshmen.

“What year did the Cronkite School of Journalism and Mass Communication move to the Downtown Phoenix campus?”

The freshmen strained to come up with the answers. (The radio station is the Blaze and Cronkite moved downtown in 2008.)

Finally, Jarvis asked a question that everyone knew.

At the start of each fall semester, peer mentors from the New College of Interdisciplinary Arts and Sciences on ASU's West campus help freshmen know what to do if faced with an unfamiliar situation. Here, they share their tips for newcomers.

Transitioning from high school to college can be tricky. Nobody knows that better than the New College of Interdisciplinary Arts and Sciences peer mentors. 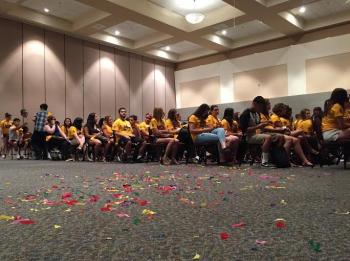 At the start of each fall semester, they see to it that incoming New College freshmen know where to go, whom to contact and what to do in the event that they are faced with an unfamiliar situation, which they inevitably will be.

On Tuesday morning, the peer mentors donned their gray and black Henleys and got to work at the New College Welcome Assembly on ASU’s West campus, guiding students in activities like ice-breaker games – sharing what they did over summer vacation, what their favorite TV show is and whether they prefer an iPhone or an Android (iPhone appears to have won by a small margin).

Though ice-breakers and traditions add a fun element to the assembly, its main purpose is to ensure students are well-prepared to tackle their first year as a Sun Devil. ASU News was on hand to glean some first-year advice from peer mentors, staff and even an assistant dean. See what they had to say below.

The main thing Jenna Graham wants New College freshmen to know is this: Make use of the resources at your disposal.

Have an open mind

Kelly Spencer, lead peer mentor, tells freshmen, “Don’t be afraid to dive into new experiences, even when they’re outside of your comfort zone.”

College is a fresh start

Sometimes students can be bogged down by past academic or personal blunders. But Drew Koch, a first-year experience program coordinator for Student Success, says it’s best to put that all behind them and focus on starting anew.

“You don’t need to be defined by your past,” he says.

Peer mentor Wilma Jackson can’t express how important it is to manage your time well, especially as a freshmen. According to her, getting into the habit early is of utmost importance.

This bit of advice from Anne Suzuki, assistant dean of enrollment services, is short and sweet but impactful. Being involved in your campus community can go a long way toward enriching your college experience, she says – and even your life beyond that.