In Northern Quebec, off the eastern shore of James Bay and about 850 miles north of Montreal, the community of Wemindji is situated within sprawling vistas of boreal forests.

This patch of Canadian countryside is home to about 1,300 members of the Cree Nation. Although their land may appear mostly untouched, the Cree have been modifying it to their benefit for generations. 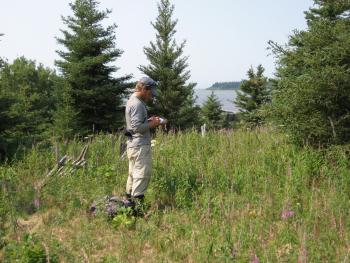 Jesse Sayles takes notes in the Northern Quebec coastal area where he has researched goose hunting as an element of the Cree people's stewardship of the land. Download Full Image

Jesse Sayles, a graduate student of geographical sciences at Arizona State University, researches the Cree and their land-use strategies. In his recently published article, "No wilderness to plunder: Process thinking reveals Cree land-use via the goose-scape," he sheds light on the Cree’s complex relationship to their land, how they have pursued development within their own community and what makes their system a sustainable one.

“Cree do modify their landscape, but they do so in a way that is difficult for Western society to see,” Sayles said. “They have a vision of development that respects the ecological integrity of the landscape.”

Sayles first spent time in Wemindji when he was an undergraduate. Since then he has made repeated visits, building his understanding of the Cree’s relationship to the environment.

In his most recent publication, Sayles focuses on strategies the Cree use to sustain their traditional practice of goose hunting.  While today’s residents of Wemindji and other Cree communities earn a living in a variety of ways, many are full-time hunters or hunt outside of work hours, either to support their family’s own food supply or to keep alive a cultural tradition.

Today some Cree from the Wemindji area are concerned that development efforts may endanger their cultural traditions. Plan Nord, an economic development strategy launched by the Quebec government in 2011, proposes investments in energy, mining and forestry in the lands currently used by Cree communities scattered through northern Quebec.

“These proposals prompted me to take another look at the Cree’s hunting practices,” Sayles said. “From my previous research I knew that while the lands surrounding Wemidji might easily be seen as untouched and open to development, Cree have used these lands and subtly modified them for generations.”

Geese fly through the region in large numbers in the spring, as they migrate north, and appear again in the fall on their southward journey.

As an area once covered in glaciers, Wemindji and the surrounding lands are a rapidly changing environment.  Within the span of a human lifetime, land rises, coastal channels dry up, and plant and animal habitats move.

Faced with these challenges, Cree hunters have developed strategies for shaping the flight path of the geese through the land. They build dikes in wetlands, delaying the time when vegetation will change to dry-land species that are less attractive to geese.  They also cut corridors through the forest, luring the geese to areas where they can be more easily hunted.

The dikes, corridors and other landscape modifications have minimal impact on the greater ecosystem of the James Bay area, but help ensure that geese will remain a viable and important food source for their community, and that the role of geese in the traditional culture of sharing will continue.

During his time in Wemindji, Sayles visited many of the different hunting and fishing camps used by the Cree for decades.

“We’d spend a lot of time visiting different sites on the land, and I documented the history of these places,” Sayles said.

To the Cree these places are more than just randomly placed camps in the wilderness. By speaking to the people of Wemindji, Sayles learned how important these lands are to the Cree’s cultural identity. These are the lands where young Cree are taught important traditions and values, and where the community goes when it is time for a celebration.

Every year the people of Wemindji launch a weeklong canoe expedition relocating to the site of their old village, in Old Factory Bay. They convene there for an annual celebration filled with feasts, music and dancing.

Sayles and his research colleagues were lucky enough to participate in this tradition.

“It was really cool to learn about a different culture, learn what was important to them, and develop those friendships,” Sayles said.

Sayles feels that the process of moving from in-the-field experience to a published academic report has been a rewarding one.

“Seeing that your work holds up to being vetted by a group of experts lends your ideas credibility,” Sayles said.

In addition to validation through the review of the article for publication, Sayles’ work was also recognized by the Association of American Geographers’ Indigenous Peoples Specialty Group, when they selected the report as winner of their 2015 Graduate Student Paper Competition.

“Understanding human-environment relationships has a long tradition in the geographical sciences,” said B.L. Turner, Jesse’s doctoral adviser.  “Sayles’ research builds on this tradition, and also contributes to contemporary concerns about the sustainability of social-environmental systems.”

Having completed his research in Wemindji for the time being, Sayles hopes that his findings will provide a way of thinking about land and resource use that will “affirm Cree stewardship and occupation of their territory.”

Since his first visit to Wemindji more than 10 years ago now, the community has seen a lot of healthy growth due in part to its effective balance of development and stewardship ethics.

“The first time I went there in 2003 there wasn’t really Internet access in the community; then two years later everyone had Internet access. Now they all have Xboxes,” Sayles joked.

Wemindji’s streets now feature modern homes and a state-of-the-art cultural center, but the Cree’s devotion to maintaining their traditional relationship with the land does not seem any weaker because of it. If anything, the Cree just want to enjoy the same modern amenities at home as the rest of the world.

The Cree look forward to growing their community and protecting Wemindji’s environment. An excerpt from their website reads: “Our vision is of a clean, healthy, safe and secure Community where we enjoy an exceptionally good quality of life. We are in constant state of healing, moving towards the strength that characterized our traditional way of life.”

New enrichment courses are open at the Mary Lou Fulton Teachers College Preschool. Starting in September, the preschool is offering a variety of courses for children ages 3 to 7.

The courses are open to the community and are held at the Mary Lou Fulton Teachers College Preschool located in Tempe at 200 E. Curry Road, Suite 146. Parking is free.

Learn and Play in Spanish

Students will explore music and movement and use them to build listening and social skills.

Students will learn about science through games, experiments and physical activity.