Commencement speaker: ASU graduates must have both skills, integrity

The skills the graduating class of 2015 learned at Arizona State University are key to career success – but just as crucial are authenticity and integrity, according to John Seely Brown, author, researcher and ASU’s undergraduate commencement speaker.

Brown compared the era Monday’s graduates enter to the one their parents and grandparents encountered.

“This is a different world. A world where skills matter, tools matter, but expertise and authenticity are also required,” Brown told the degree recipients on Frank Kush Field at Sun Devil Stadium. “It’s a world of powerful tools galore, and a world of immense opportunities, if – I stress if – you’re willing to unleash your imagination while invoking your skills.”

Brown used the metaphor of a kayaker coursing down a rapid-filled river to explain the multitasking that will be required of today’s graduates to be successful.

“You’re living in a whitewater world,” Brown said. “You must be more like a whitewater kayaker, who skillfully reads the currents and disturbances of the context around you, interpreting the flows, the ripples, the rapids, for what they reveal of what lies beneath the surface.”

Sun Devils are in luck, Brown argued, because ASU is one of the best at preparing graduates for that task.

“You have experienced here the New American University – a new kind of university that is striving to create transdisciplinary learning environments,” Brown said. “Knowledge [and] creation spaces that cultivate the imagination so that you, as entrepreneurial learners in the network age, are empowered for your future.”

University President Michael M. Crow, introducing Brown, called him one of the “few individuals on the planet” envisioning new ways to teach and learn.

“You have been truly inspirational to us, to this institution and to all that we do,” Crow said, bestowing an honorary doctorate of humane letters on Brown. “We appreciate that very much.”

Brown, known by colleagues and friends as JSB, has been an innovative thinker on issues as diverse as science, mathematics, the media and the future of higher education for years.

“John is the definition of a polymath,” said Jonathan Taplin, a professor and director of the Annenberg Innovation Lab at the University of Southern California, where Brown is a visiting scholar. “He understands more about more things than almost anybody I’ve ever met.

“There’s no one better than John Seely Brown at thinking about where the future of education ... is going.”

Brown, who is an adviser to the provost at USC, presented a discussion earlier this year about the future of higher education titled “Cultivating 21st-Century Agile Learners.”

At commencement, he praised Crow for creating an environment to produce those learners.

"Thank you for having the imagination, skill and courage to show America that higher education can seriously innovate and strive for excellence for the benefits of all social economic groups.” 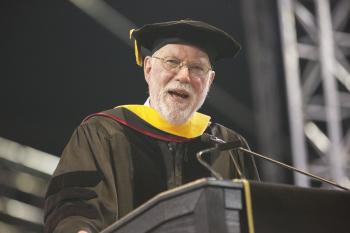 At the start of the proceedings, Crow welcomed the graduates and reminded them they have “roughly 22,000 days” in the rest of their adult lives.

He charged them to use that time to tackle America's toughes challenges, such as improving the level of justice for all members of society, addressing threats to economic and individual liberty, and managing problems like the ongoing drought in California.

“You have one mission,” Crow said, “to design new ways to solve all of these problems.”

Brown’s guidance on how to do that: “Embrace the endless possibilities of the whitewater world.”

“I envy you,” he said. “You are graduating and embarking on your life at an amazing time.”

He ended his remarks with a wish that all students – and their parents – would feel grateful to have come true.

“Thank you, and may you have a prosperous life.”

Professor Ariel Anbar's pioneering research – especially about the chemical evolution of the environment – and innovative efforts in online education have garnered him the 2015 CLAS Difference Maker award.

Many of us at one point or another have pondered our place in the universe, asking, “Are we alone?”

To hybrid scientist-teacher Ariel Anbar, it’s a question that drives his workday – and thanks to his innovative teaching efforts, he has inspired many thousands of ASU students to think about habitability in new ways. 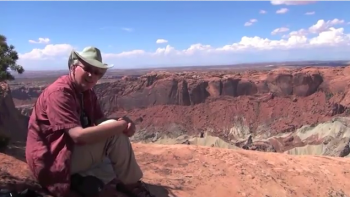 Anbar’s research focuses on Earth’s past and future as a habitable planet, and the prospects for life beyond Earth.

His pioneering research – especially about the chemical evolution of the environment – and innovative efforts in online education have garnered him the Gary S. Krahenbuhl Difference Maker Award.

The annual award, presented by ASU’s College of Liberal Arts and Sciences, celebrates a faculty member who personifies the spirit of difference-making demonstrated by Krahenbuhl, a former dean of the college.

Anbar is a President’s Professor in ASU’s School of Earth and Space Exploration and the Department of Chemistry and Biochemistry in the College of Liberal Arts and Sciences, as well as a Distinguished Sustainability Scientist in the Global Institute of Sustainability.

“Ariel has been a key member of our faculty for some time now,” said Daniel Buttry, chair of the Department of Chemistry and Biochemistry. “He serves a vital role in connecting our department’s work in molecular sciences with the School of Earth and Space Exploration, where he holds a joint appointment. He has been extremely innovative in applying skills from his Earth science work to an emerging area of biomedicine. And he has been a driving force in creating new technology platforms for teaching science.

“To say he makes a huge difference to the institution’s key missions would be a drastic understatement.”

In his research, Anbar makes a difference by seeing connections that aren’t always obvious and inspiring talented teams and communities to develop them. That approach has led him to co-author more than 100 peer-reviewed papers, many led by students, and to head many large team projects.

Now, Anbar is making a difference as a leader in online learning at ASU and nationally. He is deeply involved in using the medium to its fullest to help educate and encourage a generation that has grown up with the Internet.

He is the driving force behind an online class called Habitable Worlds, which teaches students majoring outside the sciences how to think like scientists and uses the intuition of a tech-savvy generation to kindle their interest and spur their education.

“Professor Anbar’s innovative approach to teaching made the impossible seem possible,” said ASU alumnus Justin Slavicek. “The math in the Habitable Worlds course seemed insurmountable for a non-science major like me, but his attitude, ability and confidence in me turned me in to a better student. Prior to his class, I had no interest in any form of science. Now I find myself scouring the Internet for news about newfound solar systems and the possibility of another habitable world.”

As with his research, Anbar’s success in online education comes from building a team to pursue an idea that wasn’t immediately obvious: That online technology could be used to teach introductory science in a way that was more engaging than a lecture class. In Habitable Worlds, students learn though game-like activities that help them understand the science behind big, unanswered questions like, “Are we alone?”

ASU’s newly established Center for Education Through Exploration (ETX), directed by Anbar, is an initiative designed to develop and extend this idea. The ETX Center will develop, deploy and research digital platforms that help teach science as the means by which we explore the unknown, rather than simply learning what is already known, and do it at scale.

As part of ETX, in collaboration with the Inspark Science Network and the innovative education technology start-up company Smart Sparrow, Anbar will guide the network in developing “smart courses” that teach basic science concepts through the exploration of intriguing questions, placing traditional science content in a compelling context.

“Ariel is reaching out beyond his excellent research and teaching in two major directions: first to forge a new and better path in online education, and second to help organize a team to construct productive paths forward in addressing climate change,” says Lindy Elkins-Tanton, director of the School of Earth and Space Exploration.

“He’s bringing the community together and helping us make significant leaps forward. This is what ASU is about.”

The Gary S. Krahenbuhl Difference Maker Award has been awarded since 2003 to a tenured faculty member in the College of Liberal Arts and Sciences “who demonstrates a broad vision for academic scholarship and a passion for engaging students in discovery and exploration.” Anbar is the 13th recipient of the award.