Three years ago, Scott Boisvert, an inquisitive freshman from Basha High School in Chandler, Arizona, pelted Valley scientists with e-mails in hopes of doing research in a laboratory. “You’re too young. Check back in a few years,” was the norm reply.

However, ASU scientist Elizabeth Davidson, a research professor in the School of Life Sciences, part of the College of Liberal Arts and Sciences, wasn’t deterred by Boisvert’s youth. Davidson, a veteran insect pathologist, gave him a chance. Davidson’s decision has both empowered Boisvert to shape his career path, early on, and led to national recognition for his research.


Boisvert, now a high school senior, was honored Sept. 29 in Washington, D.C., as one of 20 Davidson Fellows. Created by the Davidson Institute for Talent Development, these national awards (not related to Elizabeth Davidson) offer scholarships to extraordinary young people under the age of 18 who display excellence in mathematics, science, literature, music, technology and philosophy. Boisvert received $10,000 and was honored at a dinner at the Smithsonian Institution's National Museum of the American Indian. The honorary hosts of the event are U.S. Senators Harry Reid of Nevada and Chuck Grassley of Iowa. Awardees include students as young as 13, and awards go up to $50,000. 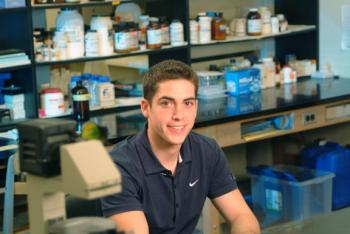 
For Davidson, the award is simply a confirmation of what she already knew: how special and dedicated Boisvert is.


"He’s a hard, hard worker," she said. "Scott is always finding something to do and does it well." For Boisvert, the Davidson Fellowship adds to what is already a bursting quiver of local, state, national and international awards he’s received for his research in Davidson's lab. The institute will specifically recognize him for this work: a study of the “growth of the amphibian pathogen Batrachochytrium dendrobatidis in response to chemical properties of aquatic environments.”


Boisvert's scientific efforts come nearly 15 years after Davidson and others first tried to determine why amphibian populations were plummeting across the globe. Back then, recalls Davidson, a hallway conversation with James Collins, Virginia M. Ullman Professor of Natural History and the Environment in ASU’s College of Liberal Arts and Sciences, led Davidson and then-technician James Jancovich to study the salamander population decline in southern Arizona. Under the tutelage of Davidson and Collins, Jancovich, now a postdoctoral researcher at ASU’s Biodesign Institute, determined that what was killing salamanders, Ambystoma tigrinum, was a virus. Further work by ASU researchers and partners in Australia and the U.S, supported by two National Science Foundation grants to study emerging wildlife diseases, uncovered that viruses and Batrachochytrium were likely lead culprits of the global amphibian decline.

Davidson has a strong history of mentorship and promotion of student’s research experiences. She has ushered 31 young researchers, including five Barrett Honors College students, toward flourishing careers in medicine, education, public health and scientific endeavor. Davidson keeps in touch with many: “I decided years ago that what really matters is not how famous you are, how many papers you publish or how much money you bring in, but how many lives you have touched.”

Boisvert is now in the midst of sending out applications to undergraduate schools; mailings that are now certain to receive notice as he pursues his desire to earn a dual master's/doctorate degree and become a physician-researcher. His research experience in the Davidson lab will serve him well in his future endeavors, he said. Besides being persistent in trying to get into labs, Boisvert has some advice for those interested in research, "you have to have motivation and find something you are interested in to get the work done." As his Davidson Fellowship Award shows, strong motivation together with great mentorship is a magical combination for success.

Jacob Adler is a master's candidate in composition in the Arizona State University School of Music. In September 2010, he represented ASU and the U.S. at the international Gaudeamus Music Week in Amsterdam, a music composition competition in which 21 composers were selected to perform their new works.Adler's composition "Hollerin' in the OrgelPark," was written for four organs, two pianos and la...

Jacob Adler is a master's candidate in composition in the Arizona State University School of Music. In September 2010, he represented ASU and the U.S. at the international Gaudeamus Music Week in Amsterdam, a music composition competition in which 21 composers were selected to perform their new works.

Adler's composition "Hollerin' in the OrgelPark," was written for four organs, two pianos and laptop. He won the organ prize and his piece can be heard on this website. Adler currently is writing a new composition to be premiered at next year's Gaudeamus festival. Hear more of Adlers music at this website.