Despite advances in both the diagnosis and treatment of breast cancer, the disease remains a leading worldwide health concern.

The team, led by Deirdre Meldrum, ASU senior scientist and director of the Center for Biosignatures Discovery Automation at Biodesign, has examined normal, benign and malignant cells, using the first and only research Cell-CT (VisionGate, Inc., Phoenix) – a specialized instrument capable of imaging cells in vivid 3-D with true isotropic resolution. The technology permits the examination of subtle cellular details inaccessible by more conventional forms of microscopy that are inherently 2-D.

The group’s findings appear in the Jan. 5 issue of the journal PLoS ONE.

The 3-D movie images of cells observed in the study reveal numerous telltale traces of their condition as normal or aberrant. Meldrum says “there are numerous quantitative morphological parameters that are indicative of disease and may be used as biosignatures for disease staging and diagnosis. For example, a cancerous cell typically has an enlarged nucleus, nuclear invaginations, chromosome mutations, and unique nuclear shape changes.”

Breast cancer remains the most common cancer in women. In 2011, an estimated 232,000 new cases were diagnosed and some 39,000 fatalities occurred. Over a normal lifetime, one in eight women will be diagnosed with the disease. In general, breast cancer begins either in the ducts of the mammary gland, (ductal carcinomas) or the lobes of the breast (lobal carcinomas).

Currently, the definitive clinical diagnosis of malignancy relies on careful examination of the nuclear structure of cells that have been prepared by histological staining and subjected to bright field microscopy. According to Vivek Nandakumar, lead author of the current study, pathologists qualitatively examine cell features including nuclear size, shape, nucleus-to-cytoplasm ratio, and the texture of cell chromatin. However, these observations do not involve quantitative measurements that would promote a more accurate analysis.

Meldrum concurs, as to the shortcomings of traditional pathology. As director of the Microscale Life Sciences Center, an NIH Center of Excellence in genomic science, she has devoted much of her career to the close study of cell heterogeneity, and the manner in which individual cells can go awry as they transition to diseased states.  “In our analysis of live single cells we can quantify significant variation from cell to cell under the same conditions,” says Meldrum.

The group used Cell-CT to examine 150 cells in each of three specific categories: normal, benign fibrocystic and malignant breast epithelial. Controversy remains as to whether breast fibrosis, which may result from hormonal changes, is a normal condition or an early harbinger of malignancy. The condition occurs when ligaments, scars, supportive tissue or other fibrous tissue become more prominent in the breast than fatty tissue.

Cell-CT is a new kind of microscope, able to image cells in three-dimensions, using a technique called optical projection tomography. Cell-CT operates much like a normal CT scanner, though it uses visible photons of light, rather than X-rays. Cells prepared for observation are not placed on slides, but are instead suspended in gel and injected through a micro-capillary tube that permits multiple imaging in 360 degrees.

The scanning process produces hundreds of thin slices through the cell. These sections, or tomographs, are reassembled through computer software, forming a detailed 3-D portrait. Movies of cells seen in rotation brilliantly reveal shape asymmetries, a particularly useful tool for disease diagnosis.

The three cell types examined in the study fell into four distinct nuclear shape categories. Category 1 cell nuclei were slender, with marked concavity. Category 2 cells had a slight concavity and were bulky. Based on these shapes, the first two categories are termed mushroom cap morphology. (The Category 2 mushroom cap morphology was the most common nuclear form seen in all three cell types.) Category 3 nuclei were mostly convex in shape, while Category 4 nuclei were irregular and distorted in shape.

Cell and nuclear volume were observed to increase as one moves from normal to fibrocystic to malignant cells, though fibrocystic cells had, on average, the largest nucleus-to-cytoplasm volume. Textural distinctions among cells and arrangement of chromatin were also observed. In all, the team computed 42 distinct 3-D morphological and textural descriptors of cellular and nuclear structure. Cell-CT technology is able to resolve cell features down to less than a half micron.

Study co-author Roger Johnson, research laboratory manager at the Center for Biosignatures Discovery Automation, stresses that the subtle nuclear differences observed, particularly for the malignant cells, would likely have been missed had the samples been examined with conventional 2-D imagery. As a result, the architecture imaged with Cell-CT supercedes the existing nuclear grades established for cancer diagnosis using a microscope.

Though much progress has been made in understanding the transformation of cells from normal to diseased states, patient outcomes for many forms of cancer remain discouragingly poor. Many believe a new paradigm for investigating such cancers will need to be established, and the field has drawn interested researches from diverse disciplines.

Paul Davies, another co-author of the current study is a physicist and cosmologist in ASU’s College of Liberal Arts and Sciences and part of a new National Cancer Institute funded consortium, devoted to studying the physical science of cancer, said: “We expect that insights and methods drawn from physical science will lead to radical new ideas for understanding and tackling cancer.”

Teri Pipe has been named dean of ASU's College of Nursing and Health Innovation.

Arizona State University has named Teri Pipe dean of its College of Nursing and Health Innovation. Pipe, who has been interim dean since June and an adjunct faculty member at ASU since 2002, also has served as director of nursing research and innovation at Mayo Clinic and associate professor of nursing in the College of Medicine at Mayo Clinic.

Pipe is an expert on nursing leadership, as well as health and wellness, and has authored numerous articles in these areas. Her research focuses on innovative approaches to creating and sustaining healing environments for patients and professional staff, models of resilience and stress management, interdisciplinary research in behavioral approaches to cancer care and survivorship, integrative health care and care for diverse populations. She has taught primarily in the areas of leadership, innovation and research. 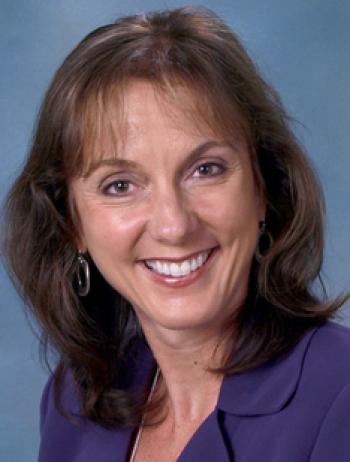 “At ASU we are focused on challenges, and improving health care is at the top of our challenge list,” said ASU President Michael M. Crow. “ASU is developing new models for health care education, research and collaboration, and the College of Nursing and Health Innovation is a cornerstone of that effort. Teri Pipe is a leader in all these areas and we are fortunate to have someone of her stature and abilities to serve as dean.”

“Dr. Pipe has demonstrated the ability to enable excellence in research, education and practice in her service as interim dean," said Elizabeth D. Capaldi, executive vice president and provost. "She has gained the support of the college and the rest of the university with her ability to lead innovative change and enable collaborative approaches to problem-solving. We are delighted she is joining us on a permanent basis.”

“It is an honor and an opportunity to serve in a world-class organization that is positioned to have a significant, positive and enduring impact on the health models of the future,” Pipe said. “The College of Nursing and Health Innovation has a strong foundation and forward momentum that is outstanding in terms of education, research and service. The students, faculty, staff, alumni and supporters are dedicated, talented and innovative individuals, and it is my sincere privilege to serve in this way.”

Her current and recent grants and research projects include:

Pipe’s most recent accomplishments have focused on facilitating interdisciplinary teams to shape health care innovations and to sustain environments conducive to health and healing. She has mentored individuals, teams and organizations in methods of building and strengthening resilience.

The ASU College of Nursing and Health Innovation is ranked 21st, or in the top 4 percent, of graduate nursing programs in the 2012 U.S. News & World Report Best Graduate Schools.