As a wave of bright-eyed elementary school students filed through the doors to the Brain Fair for Children at Arizona State University, a third-grader boasted to a friend: “I’ve been here before. This is so cool.”


That was evident when ASU associate professor of psychology Heather Bimonte-Nelson, wearing a jewel-encrusted lab coat with “Dr. Heather” written in glitter, asked: “Who’s ready to learn about the brain?” and the hands of some 350 children sprang up. “Who wants to see real brains?” she asked next, and there was more hand raising accompanied by giggles. 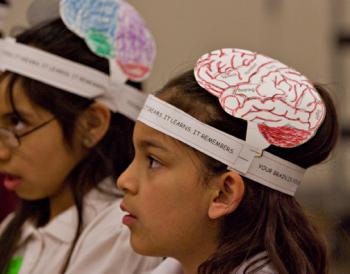 
And then, the big question: “Who wants to touch real brains?” The room popped with a chorus of “Me!” as hands waved in the air and the third- and fifth-graders exchanged looks of wonder and excitement.


Energetic and whimsical, Bimonte-Nelson, bounced in the front of the room as she led the children through warm-up exercises, having them point to their frontal lobe, temporal lobe and occipital lobe, while shouting out the names of each lobe.


For the next several hours, children rotated among learning stations, designed by ASU students who were there to demonstrate science and answer questions. At one of the stations, children put on gloves and held or touched real sheep brains. “The brain is so cool,” one child exclaimed.


Amita Padiyar, an ASU freshman in psychology explained how the fair served as a great opportunity not only for the children, but for her as well. “I know when I was younger I didn’t have the chance to be taught about the brain like this, and I really think it’s a wonderful experience. The brain is fascinating and the biggest thing is that it pertains to everyone. And it’s always good to gain more knowledge on the things which pertain to you.”


Two third-graders from Imagine Schools at Camelback, Carlos and Santos, could hardly wait to describe their experiences at the fair. “We’re learning about illusions and how our eyes get tired, and we touched goop.” Santos said excitedly. Not missing a beat, Carlos added “This is our second time here and I want to come again next year. The slimy brain is the best!” he said, before rushing off to another station.


Susan Ham, mother of a fifth-grade student from Kyrene de la Sierra Elementary School in Phoenix, watched the children with admiration. “These activities are so hands-on and interactive. They provide the kids with a different viewpoint of science. They break down the common misconception that science is ‘scary’ and show the kids how interesting it can really be.”


At the Microscope Imagination Station, shrieks of excitement and awe erupted as a group of fifth-graders from Kyrene de la Sierra Elementary School had the opportunity to touch a very long, live carpet python.


Zach Stahlschmidt, an ASU graduate student in biology, who assisted the children with viewing a salamander and Gila monster, and their respective brains, said, “Exposing these kids to the diversity of science and allowing them to see animals that they might not have the opportunity to see otherwise, it’s truly a great thing.”


A few feet over, another group of children stood deeply focused on brains they were modeling out of Play-Doh. “You see how this is all wrinkly?” an ASU student leader asked as he pointed to the children’s sculptures. “Our brain is the same way. Our brains do so much and hold so much information that it has to be folded really tightly to condense all of the stuff. If we unfolded the brain, we’d have huge heads.”


In addition to the more than 100 student and faculty volunteers from psychology and the School of Life Sciences, guest scientists from Barrow Neurological Institute of St. Joseph’s Hospital and Medical Center and the University of Arizona College of Medicine were also in attendance to talk science with the children.


Nate Hightower, an ASU senior psychology major said: “These kids actually know a lot about the brain. They’re really enthused about it. I think this promotes higher learning in a fun way and lets them see that there’s more to life beyond high school.”


It is exactly this inspiration that drove Bimonte-Nelson to host a Brain Fair for Children at ASU: “The obvious goals are for the children to learn about science and have fun through hands-on exploration. Ultimately, we want them to leave with the bigger picture that college is fun.”


Five years ago, Bimonte-Nelson began a community outreach program during Brain Awareness Week and started visiting local elementary schools to speak about the brain. She and her students have also conducted programs at the Children’s Museum of Phoenix and Arizona Science Center. Her program gained so much popularity from children, teachers and parents alike, that she realized she couldn’t continue to cart microscopes and brain models from classroom to classroom. In a flash of genius, she decided to host a Brain Fair at ASU and bring the children to a university setting.


“I’m a brain scientist and it’s my specialty,” Bimonte-Nelson said. “The science of the brain really goes hand-in-hand with the message we’re trying to get across: You are responsible for making the decisions which will affect your future. The brain makes those decisions.”

The College of Liberal Arts and Sciences Engineering Student

ASU has a chance to host its first regional since 2003.

The No. 15 Arizona State women's tennis team's success might have surprised some Pac-10 opponents, with the Sun Devils upsetting California in Tempe and defeating USC in Los Angeles, but the success comes as no surprise to the ASU team themselves.

Heading into this weekend's competition against No. 13 USC and No. 8 UCLA, the Sun Devils have a chance to host NCAA's for the first time since 2003 with victories over the Los Angeles schools. Seven years ago, the Sun Devils advanced to the NCAA Round of 16 before falling to Florida, 4-0.

"You have to hand it to them," said head coach Sheila">http://thesundevils.cstv.com/sports/w-tennis/mtt/mcinerney_sheila00.html... McInerney of her players. "I'm really proud of our kids. We had some tough losses but they're really resilient. We're a really good team. For our kids it's really nice to validate that with [great wins]."

McInerney is rounding out the 27th season of her coach career at Arizona State, the second-longest tenured coach on staff. The veteran coach is on pace to notch one of the most successful seasons in her run as head coach for the Sun Devils. Following ASU's victory at Washington, the Sun Devils compiled a five-match winning streak.

With her stellar tournament play this fall, McKenna has been the go-to player for the top spot in the ASU line-up. McKenna, ranked 19th in the nation by ITA, won the Cal Nike Invitational and became the first Sun Devil to win the ASU Thunderbird Invitational this fall all while completing a rigorous student-teaching schedule.

With McKenna, Hein makes up the other half of Arizona State's top doubles team. The senior duo, ranked 18th in the most recent ITA doubles rankings, has competed as doubles partners for the majority of the past three seasons.

Making an immediate impact in her freshman season, Jacqueline">http://thesundevils.cstv.com/sports/w-tennis/mtt/cako_jacqueline00.html"... Cako had an 18-match singles winning streak before dropping her first match of the dual season in late March. Cako, No. 16 according to ITA, went into three sets with Washington's No. 23 Venise Chan before snapping her run against the Husky.