The Internet is a vast source of information, from news to entertainment and everything in between. For some, the Web is also a place where constant, targeted violence is unavoidable.

For example, Elizabeth Losh, director of the Culture, Art, and Technology Program at the University of California, San Diego, kept a blog from 2005 to 2010. As a professor she wrote about academic subjects. Whenever she tagged a post with the keyword “feminism,” harassment inevitably followed. 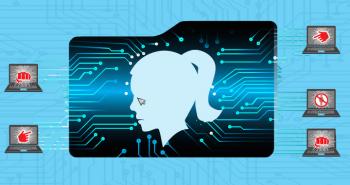 “The comments were just horrible,” Losh said. “They would involve very specific violent fantasies about rape and murder.” Sometimes, harassers would even mention her children.

Mikki Kendall is a writer who covers a variety of topics, including issues of race and gender. For years, Kendall has been harassed by a stranger online.

“Technically he’s not threatening me. He’s using his right to free speech to say that someone should rape me and kill me or feed me to the dogs — whatever it is that day,” Kendall said.

Unfortunately, these types of stories are not uncommon. Online violence toward women — especially transgender women and women of color — has worsened over time. Last year, the GamerGate controversy brought this issue to the forefront of public attention.

GamerGate originated when a female game developer received media attention for her newly released game. Her former boyfriend published an article online accusing her of getting coverage of the game through unethical means. This sparked a campaign of online harassment — publishing the woman’s personal information and threatening her and members of her family. The controversy sparked a larger public conversation about violence toward women online, both in and out of the gaming world.

Jacqueline Wernimont, an assistant professor in ASU’s Department of English, wants to improve security for women on the Web. Wernimont’s research focuses on feminist digital media and civil rights in digital cultures. She is working with Losh, Kendall and about 30 other women — academics, legal scholars, activists and educators, many who have experienced online violence firsthand — to come up with solutions.

With funding from the Digital Media and Learning Competition, the women convened a summit, “Addressing Anti-Feminist Violence Online (AAFVO),” in July at ASU’s Institute for Humanities Research. Discussions at the summit revealed that the perpetrators of online violence, and the violence itself, can take many forms.

When allies do harm

Journalists and academics are expected to follow certain ethical standards. Plagiarism, for example, is not tolerated in either field and can be a career-ender. Does that rule apply to the use of public social-media content?

Sometimes the best way to gauge public opinion is to watch how conversations are unfolding on social media. It’s not uncommon for journalists to embed tweets from public Twitter profiles into their articles as a way to show a variety of opinions on an issue or current event. But this practice isn’t always as benign as it may seem.

“When I first started to use public social media, I would look up and something of mine might be on television,” Kendall said, adding that it may or may not have been credited to her.

Kendall once tweeted about a personal experience she had as a teenager. A journalist from a prominent progressive news outlet embedded her tweets into an article without her permission. That article reached millions of people who all now had access to Kendall’s name, photo and Twitter handle. Many of them took to Twitter to flood her profile with vicious comments and threats.

“[The journalist] gets the check from writing about what happened to me without even having to interview me or get consent, and I get the harassment,” Kendall said. And this is not uncommon. “I’m really disturbed by how often journalists will see a conversation about sexual assault or trauma or whatever happening on social media, and then decide that what that needs is to be shown in snippets without context to about 9 million more people.”

Women at the AAFVO summit cited numerous similar examples. Several women also reported their personal experiences of being deceived by academics and having their work used or repurposed without permission.

“I started to find I was in people’s dissertations,” Kendall said. One woman she met at a science-fiction conference claimed to have interviewed her for an academic paper. But the woman never identified herself as a researcher.

“She joined our little group, and apparently that was all for research. She didn’t tell anyone that’s what she was doing,” Kendall said.

Cases like this are a form of violence, according to Wernimont. “It is the theft of other people’s words and ideas. It’s an appropriation of her intellectual and ethical labor in a way that renders her invisible.”

The 'game' of harassment

Most people wouldn’t walk up to a complete stranger and threaten to kill them. So what makes such threats so common online? The obvious reason, of course, is that people are braver sitting anonymously behind a screen in the comfort of their own homes. But there are other factors at play.

“Sometimes, the people who are abusing these adult women are actually adolescent or pre-adolescent boys,” Losh said. This brings up complex questions about socialization and etiquette. Appropriate online behavior isn’t taught widely in school, or anywhere.

Kendall agrees that the perpetrators of harassment online are sometimes teenagers or younger, and they appear to see it as a game. They compete against one another and “hype each other up,” she said, to the point where they may not even care about the target. They’re just caught up in the game.

But the “game” is very real to the victims of harassment.

“People do things like flood the Twitter feeds of black women with racist comments,” Wernimont said. “There are instances in which people have gone after people of color in social media by posting, either on Twitter or Facebook or Instagram, pictures of lynchings, pictures designed to highlight black death.”

In other cases, harassers will engage in the act of “doxxing,” or publishing people’s personal information online with an invitation to harass them. This can include home addresses, email accounts and even Social Security numbers and bank information.

“In the most extreme situations, women have been doxxed along with encouragements to harm or even kill them, and some of those women have been murdered. Trans women are particular targets of this kind of violence,” Wernimont said.

The AAFVO summit has led to the formation of the Center for Solutions to Online Violence, a virtual hub for participants to unite and work together. Members are developing working groups in four areas: rapid response to security threats, ethics in social media, the history of leadership by women of color in cyber and other forms of security, and curriculum development that deters online harassment.

As people spend more and more of their lives online, these solutions are increasingly necessary. Online violence doesn’t just affect people at a personal level — it’s a threat to the country as a whole. After all, Wernimont said, “even national security weaknesses happen at the level of the individual.”

Plus, there are larger societal implications of certain groups and demographics being driven offline.

“What voices are being silenced, and what’s the cost to our larger democratic conversations?” Losh asked. “I think those are the issues that not just academic researchers should care about, but people in the general public should care about.”

ASU's Gober: Developing world far ahead of US in water conservation

The Stockholm Water Prize is considered the Nobel Prize of water; this year, ASU professor emeritus Patricia Gober had the honor of reading the citation for the winner, Rajendra Singh. Gober talks about the award and about the future of water resources.

ASU's Gober: Developing world far ahead of US in water conservation

The Stockholm Water Prize is considered the Nobel Prize of water.

Celebrated for 25 years, it is the world’s most respected award for outstanding water achievements. 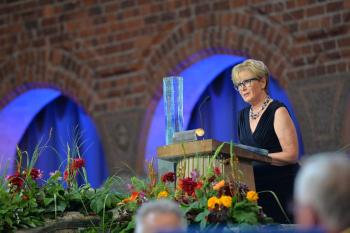 This year, Arizona State University professor emeritus Patricia Gober was on stage with the honor of reading the citation prepared by the nomination and selection committee.

“It was a majestic affair, befitting the prize,” she said of the black-tie prize ceremony and royal banquet.

Rajendra Singh accepted the prize from the King of Sweden, His Majesty Carl XVI Gustaf, as Gober stood by. Singh was honored for modernizing ancient ways of collecting and storing rainwater in the Indian desert state of Rajasthan, consequently restoring several rivers and ensuring water for thousands of villagers.

The prize honors individuals, organizations and institutions whose work contributes to the conservation and protection of water resources, and to the well-being of the planet and its inhabitants. All who have made extraordinary water-related achievements are eligible. Gober serves as a member of the prize’s nomination and selection committee.

She said the prize was the culmination of World Water Week, an annual global meeting in Stockholm for the world's water community. The king and crown princess showed up for presentations during the week’s events.

“We don’t usually have kings and queens at science presentations,” said Gober, interim director of the School of Geographical Sciences and Urban Planning.

Gober co-founded ASU’s Decision Center for a Desert City and was its co-director for its first seven years, and she’s a recipient of the Prince Sultan Bin Abdulaziz International Prize for Water, Water Resources Management and Protection, another highly prestigious recognition.

While elbowing with royalty was unusual for her, what struck Gober was how far ahead of the industrialized West developing countries are in water conservation.

“We could learn some very good lessons (from them),” she said. “Why should we think our lives will be any different than those folks?”

Developing countries deal with water in terms of prioritizing drinking and sanitation first, not in choosing almonds over lawns.

“Do we grow lettuce or lawns? Those are the choices,” Gober said. “We will have to morph into a more sustainable model. … How do we assess the risk of not having enough water?”

As the drought in California continues and snowpacks around the West shrink, the situation will call for a wholesale change in how we live, Gober said.

“Insurance has tables for flooding,” she said. “We’ll have insurance tables for water availability and drought.”

Although the situation in California has caught the attention of the entire country, it will take corporate awareness to begin bringing about the type of change the developing world has wrought, as exemplified by Singh’s work in India.

“When business sees its activities are being curtailed and they come to the table, we’ll have serious discussions about water,” Gober said. “It’s a big deal for companies like Coca-Cola.”

The School of Geographical Sciences and Urban Planning is a unit of ASU’s College of Liberal Arts and Sciences.