A new species of a rugged darkling beetle that thrives in an arid region of the Chihuahuan Desert is being named in honor of Theodore Roosevelt on the 100th anniversary of a speech he gave at Tempe Normal School, now Arizona State University. The speech, delivered March 20, 1911, focused on the role of government, the importance of an educated citizenry, and the “far-sighted wisdom” of the Territory of Arizona. 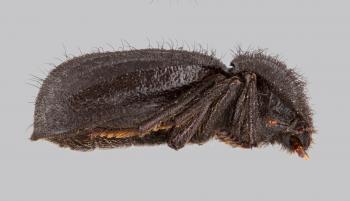 
The new species of beetle, Stenomorpha roosevelti, covered in thick dark hair with golden setal pads on tarsal segments of legs, was discovered in the protected area of Cuatro Ciénegas, a biodiversity-rich oasis in Coahuila, Mexico. It was discovered and named by Aaron Smith, an authority on darkling beetles and a postdoctoral research associate at ASU; Kelly Miller, an assistant professor and curator of arthropods for the Museum of Southwestern Biology at the University of New Mexico; and Quentin Wheeler, a professor and founding director of the International">http://species.asu.edu">International Institute for Species Exploration at ASU.


“We wanted to do something distinct and long lasting to mark Roosevelt’s impact on Arizona and conservation as we ramp up to the state centennial next year,” said Wheeler, an ASU vice president and dean of the College of Liberal Arts and Sciences.


According to Douglas Brinkley’s book, “The Wilderness Warrior: Theodore Roosevelt and the Crusade for America,” it was Roosevelt’s executive orders that saved such natural treasures as Devils Tower, the Petrified Forest, and Arizona’s Grand Canyon.


“Naming a new species for President Roosevelt honors his achievements as a pioneering conservationist, naturalist and explorer, and helps us bring attention to biodiversity and the field of taxonomy. The ruggedness of this darkling beetle reflects many of the hardy and resilient characteristics of President Roosevelt,” said Wheeler.


Roosevelt has had a number of species and subspecies named in his honor, including an elk, shrew, mollusk, worm and ant, according to Wheeler. “To this list of honors we are pleased to add this rugged and dashing new species of beetle.”


The announcement of the new species named for Roosevelt was made March 21 during a commemoration">http://asunews.asu.edu/20110318_roosevelt">commemoration ceremony at ASU’s Old Main, the site of the former president’s speech 100 years ago. Roosevelt was in Arizona at the time to dedicate a new dam on the Salt River that was named in his honor.


Roosevelt is not the first US president to have a beetle named by Wheeler and Miller. The pair of entomologists has named new species in honor of former President George W. Bush, former Vice President Dick Cheney, and former Secretary of Defense Donald Rumsfeld (Agathidium bushi, A. cheneyi and A. rumsfeldi). They also named beetles for the late rock ‘n' roll legend Roy Orbison and his widow Barbara (Orectochilus">http://asunews.asu.edu/20080126_orbisonbeetle">Orectochilus orbisonorum); for fictional "Star Wars" character Darth Vader (Agathidium vaderi); and for Stephen Colbert, the satirical host and executive producer of Comedy Central’s “The Colbert Report” (Agaporomorphus">http://asunews.asu.edu/20090506_colbertbeetle">Agaporomorphus colberti).

Herberger Institute for Design and the Arts presents 'SCHREIBSTÜCK'

Artists from the ASU Herberger Institute present <i>SCHREIBSTÜCK</i>, a cross-institute collaboration performance, based on a score by Thomas Lehmen.

Herberger Institute for Design and the Arts presents 'SCHREIBSTÜCK'

Artists from the ASU Herberger Institute present SCHREIBSTÜCK, a performance based on a score by Thomas Lehmen. The project is the result of a cross-institute collaboration. Produced by the ASU School of Dance, three interpretations are performed together in a canon structure.


The piece is designed to illuminate similarities and differences in cultural assumptions and contexts, but essentially is a very poignant evocation of the multiplicity of attitudes, concerns and perspectives that determine what we are as human beings, and of course what connects us across the Herberger Institute. The performance contains adult themes and language.


Each interpretation of the SCHREIBSTÜCK is made without access to the other teams, and the resulting versions reveal the various creative strategies and aesthetic and cultural choices each group determines in handling the proposed themes and structure of the piece.


Thomas Lehmen is one of Europe’s most influential dance makers, whose choreographic work tends to continuously circle around questions of presence, or how to overcome or transgress conventions of the stage.