Most U.S. college students take at least one composition course as part of their degree’s general education requirements.

What that course experience looks like has changed markedly over the last 40 years, in part due to the research and professionalization of those who teach in and administer writing programs in universities and community colleges across the U.S. and abroad. 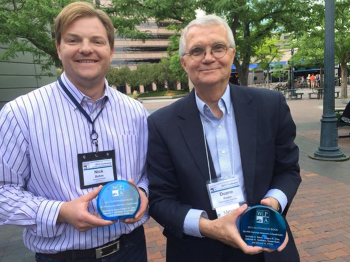 “In the last four decades the field has increasingly placed more emphasis on the rhetorical features of writing — how writers adapt their messages to meet the needs of specific audiences for specific purposes and occasions,” said ASU’s Duane Roen, professor of English and dean of the College of Letters and Sciences and University College. “Further, writing is now seen as a powerful tool for critical thinking and reading.”

In April 2000 a key professional organization — the Council of Writing Program Administrators (CWPA) — published a significant driver of change. Known as “The WPA Outcomes Statement for First-Year Composition,” it articulated student learning outcomes informed by practice, theory and a large body of research.

“In addition to serving as a student-centric guide for making programmatic decisions, it also offered guidance to faculty in all disciplines about how to help students build their writing abilities along disciplinary, professional and civic lines,”  Roen said.

He and ASU doctoral alumnus Nicholas Behm, along with three additional co-editors, published a book of essays in 2013 looking at the ways the CWPA outcomes statement is being implemented and influencing first-year composition, writing centers, and writing-across-the-curriculum efforts in the United States and beyond.

“The WPA Outcomes Statement: A Decade Later” was chosen to receive the CWPA’s 2015 “Best Book Award” and the editors were recognized at the annual conference of the Council of Writing Program Administrators in Boise, Idaho, July 16-19.

The CWPA book awards committee praised the work for its "breadth and depth of the contributions," and noted that "this book will be a useful resource for years to come. It’s not only a retrospective, but a forward-looking work that provides ideas for institutions at all levels."

“For faculty, graduate students and administrators interested in developing and managing successful campus writing programs, the CWPA has been the go-to professional organization since it was founded in 1979,” said Roen, who has led writing programs at ASU and at Syracuse University during his career and just completed nine years on CWPA’s executive board, including a two-year term as president of the organization.

“Its active listerv, refereed journal, conferences, institutes and consultant-evaluator services have served in essence as midwife in birthing the field of writing studies and connecting a community of writing program administrators who may be one of one at their institution.”

The Teachers College Preschool is an inclusive program for 3- to 5-year-olds and accredited through the National Association for the Education of Young Children.

There are full-day and limited half-day spaces available for enrollment before the first day of school on Aug. 12.

Visit education.asu.edu/about/tc-preschool for more information or call 480-965-9396 to set up a tour of the school.