Who were the first humans? What do recent findings tell us about how our species evolved? And what new discoveries are changing our thinking about where we came from?


Science Live online has asked Institute of Human Origins' director Bill Kimbel to participate in a live chat on these topics, titled “Who was the first human?” Joining Science’s Ann Gibbons will be Kimbel and Peter Ungar, chair of the Department of Anthropology at the University of Arkansas. The chat will begin at noon Phoenix/MST time on Thursday, June 23 (3:00 pm EDT) at the Science.org link at http://news.sciencemag.org/sciencenow/2011/06/live-chat-who-was-the-first-huma.html.


Kimbel’s participation in this live online conversation comes out of an article written by Gibbons for the June 17, 2011 issue of Science, “Who Was Homo habilis – And Was It Really Homo?" In it Kimbel is quoted in a discussion of the origins of Homo using identification based on diet using teeth patterns:


Diet can vary among individuals and is not a reliable trait for classifying taxa, says paleoanthropologist William Kimbel of Arizona State University, Tempe. Also, a fossil jawbone from Hadar, Ethiopia, has traits that put it squarely in Homo, dates back to 2.3 million years ago, and is very similar to H. habilis, he says. If so, early members of H. habilis may have given rise to H. erectus in Africa. (link to the full article: http://www.sciencemag.org/content/332/6036/1370.full">http://www.sciencemag.org/content/332/6036/1370.full">http://www.science...)

The 2011 Summer Staff Artfest, sponsored by The Devils' Workshop, will kick off on July 6 with a Native American flute concert by David Webb, retired assistant director of Facilities Management.

The 2011 Summer Staff Artfest, sponsored by The Devils’ Workshop, will kick off on July 6 with a Native American flute concert by David Webb, retired assistant director of Facilities Management, from 12:15 to 12:45 p.m. in Organ Hall.

Webb will play some of his 20 different flutes during the free concert. Webb has been playing the flute for 10 years, and he has collected flutes in a variety of keys and woods.

“Our music is a blend of original contemporary guitar arrangement with expressive flute responses, while intermittently fused with spoken word/poetry of Native American life, themes and views,” said Kemp, who is an environmental graphic designer senior for University Campus Signage. Yazzie is a technical support analyst associate in the University Technology Office - Data Center Operations.

July 20, will find University Carillonneur William Swayze giving a concert on ASU’s Symphonic Carillon, which was a gift to ASU from Associated Students of ASU in 1966. To see the carillon, go to the lower level of Old Main. To hear the concert, sit around the Memorial Union.

The program on July 21, will shift to Piper Writers House, where Barbara Huff, a research associate in psychology, will bring her dog Marie to show off their Rally-O program. Marie also will model a wardrobe of ensembles for such destinations as Catalina Island, the ballet, and the rodeo. Rally obedience, or Rally-O, as it’s popularly called, combines the characteristics of sports car racing, dog agility, and traditional obedience into a new fun sport. Huff designed and created much of Marie’s wardrobe.

On July 26, fused-glass artist Sharon Elliott will show her work at Piper Writers House. Elliott, a Systems Analyst for the University Technology Office, makes a variety of objects of glass, including bowls, ornaments and jewelry.

William Swayze will present a concert on grand piano and the Fritts Organ on July 27, titled “Specific Creativity!” He will perform the same music on both instruments, demonstrating how it changes from one instrument to the other.

The action shifts back to Organ Hall on Aug. 2, with a concert by vocalist Michele Lefevre, a program coordinator for BEST Learning Forever, a professional development program in the Mary Lou Fulton Teachers College; soprano Kristen LaRue, outreach program coordinator, sr., Department of English, accompanied by Marcia Henley, a staff member in the Access for Disability Accommodations unit at ADA Hayden Library, and ASU Archivist Rob Spindler, who sings and plays the guitar.

Spindler (A.K.A. Les Izmore) began singing publicly in choral groups at the age of 10. He’s a self taught multi-instrumentalist with abilities in guitar, bass, piano, drums and trumpet. He released the CD entitled “CSNY + 2” at his Five Saguaros Studio in Tempe.


LaRue completed her bachelor of music education degree at Montana State University and her master of music history and literature degree at ASU A self-professed musical theatre nut, Kristen has performed with several theatre troupes in the western U.S. over the past 15 years (credits include roles in Oklahoma!, A Chorus Line, Cabaret, Oliver!, Anything Goes, How to Succeed in Business Without Really Trying, and the operetta, The Old Maid and the Thief, among others). Kristen is also passionate about choral music, having sung most recently with the Carolyn Eynon Singers and ASU’s Early Music Chamber Choir. 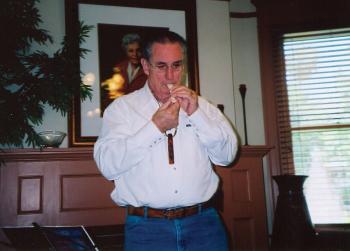 
Henley came to ASU in 1989 as a music major, and in 1991 began student employment in the Stacks unit at Hayden Library. She received her bachelor of Iinstrumental music education, but decided not to pursue a career in music, and instead continued on at the library Currently she also enjoys raising her two children and playing keyboard occasionally in her church worship band.


The Artfest concludes on Aug. 4, with a reading by Marshall Terrill, a member of the Public Affairs staff at ASU’s Downtown Phoenix campus. Terrill is a veteran film, sports and music writer and the author of more than a dozen books, including best-selling biographies of Steve McQueen, Elvis Presley, and basketball legend "Pistol" Pete Maravich. Three of his books are in development to be made into movies.

All events held from 12:15 to 12:45 p.m. Additional events will be added throughout the summer. for the latest schedule, visit http://artfest.asu.edu.