Fighting violence against women and girls in her Pueblo is a key driving force for Corrine Sanchez, one of 10 members of ASU’s inaugural Native American doctorate program. 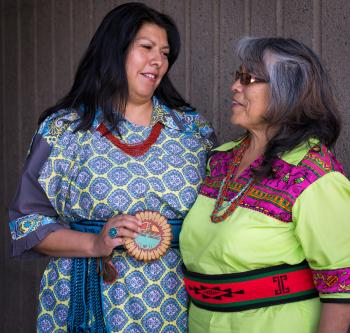 But she doesn’t want to just be part of the conversation – Sanchez wants to set her Pueblo’s agenda on the topic.

That goal comes closer to reality after Sanchez collects her doctoral degree this month with the rest of the program’s cohort. Empowering the students to become leaders in their communities’ policymaking and effecting positive change is the goal of the ASU Pueblo Indian Doctoral Program, which will see its inaugural class graduate May 11.

"We’re all at different levels at having a seat at the table, and getting our doctorate affirms our seat at the table," said Sanchez, who will receive a doctorate from ASU’s School of Transformation after three years of hard work, research and sacrifice.

The ultimate goal, program leaders hope, is for the doctoral students to set the menu with policymakers through their research agendas so that their Pueblos are enriched and well-represented.

"I hope these steps are opening the doorway for others who will come after us just as the trail had been blazed by those before us," said Sanchez, executive director of Tewa Women United – a Native-run organization in northern New Mexico – who had spent her career watching others make policy for her people.

“My dissertation is a give-back to the women who helped get me here and to the next generation so they can continue in this path with power, strength, power and wisdom.”

Conducted in partnership with the Leadership Institute at the Santa Fe Indian School, which is under the leadership of the 19 Pueblos of New Mexico, the program facilitates the training of practitioner-researcher-scholars within Pueblo communities.

The members of the cohort conducted their studies both in Arizona and New Mexico, creating a unique set of logistical challenges. Coursework was conducted through a mixture of video-conferencing, online and in-person courses focusing on issues of Pueblo governance. They included Native language, land and cultural resource protection, environment, health, art, community and economic development, families and communities, and law. Their coursework also included international indigenous-community visits, training in critical indigenous research methodology, and learning to write for publication.

The program launched in 2012 and is led by School of Transformation faculty members Elizabeth Sumida Huaman, assistant professor of Indigenous education and a senior researcher with the Leadership Institute; and Bryan McKinley Jones Brayboy, President’s Professor, director of the Center of Indian Education and ASU’s special adviser to the president on American Indian Affairs.

“Historically policymakers have largely been outsiders to the Pueblo community, and this is a national, statewide and local trend. This program strengthens the portfolios of our doctorate students and allows them to have the potential to literally change their communities.”

Brayboy pointed out that only one out of 7,000 Alaskan and Native Americans who reach the ninth grade will go on obtain a doctorate degree. He believes obtaining their doctorate will help the cohort members address the complex issues facing their communities.

"This accomplishment is big stuff,” Brayboy said. “Framing the graduation and successful completion of the program in those stark terms, this is no joke.”

Carnell Chosa, who successfully defended his thesis earlier this month, is focused on engagement through innovative community programs for youth.

"My research looks at what do we need to do to through programming to keep our young people engaged and find a way to look at all of our Pueblo communities and bring them together," Chosa said.

“One of the things we did was to create a newsletter, which was to bring the voices of the youth back into the communities by sharing their viewpoints to the elders. As the world changes and our Pueblo changes, our form of engagement has to evolve.”

Richard Luarkie, who is studying transformation through an economic lens, said his doctorate is focused on federal policy regarding the Federal Trust Doctrine of 1831, a guideline for how the government helps tribal nations.

Luarkie said rather than looking at what the government can provide, Native Americans should be looking at ways to change policies to help them build infrastructure so their economies can innovate and thrive.

"While these policies are supposed to be safeguards, sometimes they are not advantageous to the tribes," Luarkie said. “ … Basically we have worn the White man’s moccasins – their policies – all these years, and we’re at a point where we need to take off those moccasins and put on our own.”

Luarkie said the PhD at the end of his name isn’t going to be the answer or solution, but it will be another tool in his educational arsenal.

"The credential of the PhD is really for the outside world, not for my local community because they always remind me, ‘It’s not about you,’ ” Luarkie said. “The degree is not a solution or a way for us to create a utopia. It’s simply another tool that allows us to say our position and argument are valid and here’s why.”

The cohort capped off the program with a visit to New Zealand in early May for an academic exchange with scholars at the University of Waikato in Hamilton, and will spend a few days in three indigenous communities in order to learn more about their communities.

An entrepreneurial ASU materials scientist and engineer will contribute to a prominent institute's endeavors to help solve the world's challenges.

Only 20 people – mostly civic and business leaders, not academics and researchers like Friesen – are chosen each year to participate in value-based leadership training with a focus on solving society’s biggest problems. 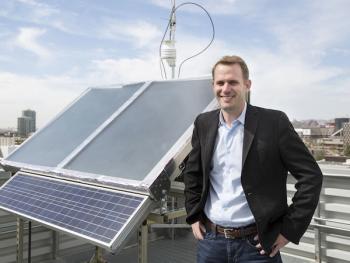 “Many of the fellows are in the corporate world, where you succeed by being very careful and not making mistakes,” said Friesen, who is on the faculty of the School for Engineering of Matter, Transport and Energy, one of ASU’s Ira A. Fulton Schools of Engineering.

“But in what I do, my way is to make as many mistakes as possible as quickly as possible. That’s a very different approach to doing things than most of the other people who will be on this team.’

As part of the institute’s 2015 fellowship team, he will engage in a series of seminars, workshops and retreats over the next two years that build leadership skills and help guide Crown Fellows in employing their expertise and talents in enterprises to serve their communities and beyond.

Friesen does fit in with the group by virtue of his entrepreneurial drive – the key trait the Aspen Institute considers in selecting new Crown Fellows. Entrepreneurship “is in my DNA,” Friesen said.

His research has produced technological innovations that are the foundation of two growing business start-ups.

Fluidic Energy is based on advances in battery technology. Friesen has developed the first rechargeable metal-air battery, one that significantly decreases the cost of storing energy.

This has led to the batteries being deployed in emerging markets at commercial sites where the power grid has very low reliability. Fluidic Energy’s batteries have already covered more than half a million power-grid outages, many lasting for more than 10 hours.

The system could potentially enable water supplies to be produced locally and affordably without the need to be connected to infrastructure systems, Friesen said.

Both ventures are attracting investors and partners, and Zero Mass Water is setting up pilot projects in locales in Latin America, Africa and the Middle East where water is scarce.

The early success of the two companies has led to the establishment of Zero Mass Labs at ASU, which Friesen said he hopes will lead the way in establishing a more advanced platform for university research labs to move emerging technologies to product development and then into the marketplace.

Friesen is looking forward to his experience as a Crown Fellow to give him an “immersion in leadership culture at a high level that will help me evolve into the kind of leader I will need to be to maximize the potential positive impact of the technologies we are developing,” he said.

His fellowship team members “are fascinating people with very impressive accomplishments, and I am excited to get to work with them.”

Friesen graduated from ASU with a bachelor’s degree in materials science and engineering and went on to earn a doctoral degree in the field at the Massachusetts Institute of Technology (MIT).

He joined the ASU faculty in 2004 and has since been named one of the Fulton Entrepreneurial Professors in the Ira A. Fulton Schools of Engineering, as well as a Fulton Professor of Innovation. He also is a senior sustainability scientist with ASU’s Global Institute of Sustainability.

Friesen has 32 worldwide patents and 11 U.S. patents, and in 2009 he was named one of the leading innovators in the world under the age of 35 by MIT Technology Review magazine.

Recently, he began a second term on the U.S. Manufacturing Council of the U.S. Department of Commerce.

Read more about the Aspen Institute, the Henry Crown Fellowship program and the 2015 fellowship team.